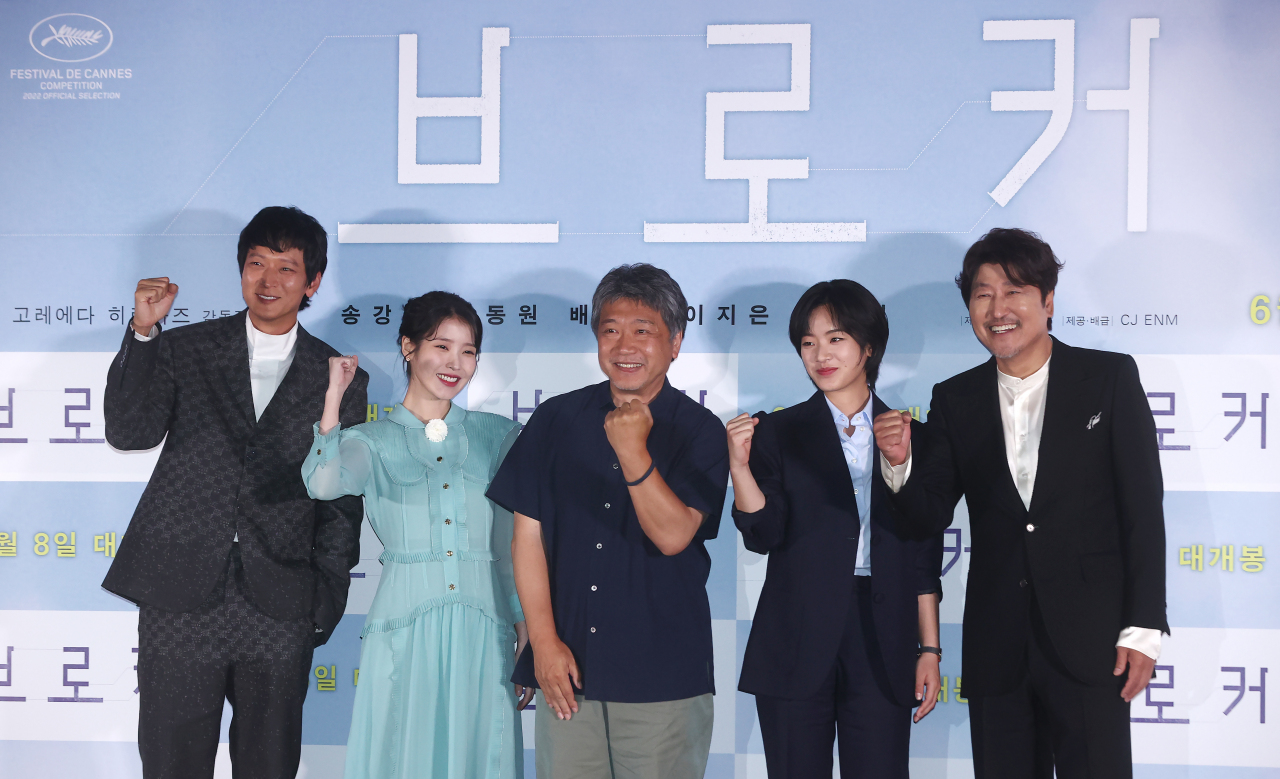 From left: Actors Gang Dong-won, IU, director Hirokazu Kore-eda, actors Lee Joo-young and Song Kang-ho pose after a press conference at CGV Yongsan on Tuesday. (Yonhap)
Actor Song Kang-ho recalled what it was like to receive the best actor award at the 75th Cannes Film Festival, a first for a Korean male, during a press conference for the film held Tuesday, just a day after returning from France.

“Very few get to receive awards at Cannes. Only seven out of 21 movies (in competition) get awards. Before midnight, those seven films get a notice that they will receive awards. So I was really nervous before midnight,” Song said during the press conference held at CGV Yongsan in central Seoul. “It is hard to recall the exact moment when my name was announced. I think I panicked and had a bizarre feeling and also was very happy.”

Song added that the first text messages he received after getting the award were from director Bong Joon-ho in London and director Kim Ji-hoon in Korea.

“They were watching the awards ceremony on YouTube. I received so many congratulatory messages and so much praise. I want to continue to enjoy them bit by bit,” Song joked.

Director Hirokazu Kore-eda also shared what it was like to watch Song receive the top actor prize.

“I am a little cynical, so when people praise my work I think about which part was good and can never enjoy their praise. But when my actors receive praise, I can truly enjoy it and be happy,” the director said. “Japanese reporters also told me that I looked happier than usual.”

The Japanese director added to the praises for Song’s performance.

“I think Song won the award not because I did something right; it was due to the accumulation of all the work that he has done. I could not believe that he had not received any awards previously,” he said. “If he had received the award earlier for appearing in director Bong Joon-ho’s work or director Lee Chang-dong’s work, nobody would have thought that he did not deserve it. I feel sorry that he is receiving it (belatedly) with my project, and I am so happy. It is the best award that my movie ‘Broker’ can receive.”

Kore-eda’s “Broker” centers on relationships formed through “baby boxes” installed at churches or institutions in Korea where desperate parents can leave their newborns anonymously.

The film begins with So-young (played by IU) leaving her baby in front of a baby box at a church. Sang-hyun (played by Song) and Dong-soo (played by Kang Dong-won) secretly steal the baby to sell him to a family who cannot adopt legally. So-young who returns to the church the next day finds out that Sang-hyun and Dong-soo have taken her baby. Soon, So-young and the two men are looking for the rights parents for the baby.

Meanwhile, a cop, Soo-jin (Bae Doo-na), follows the two men and nabs them as they are about to make an illegal deal with potential parents.

During the conference, the Japanese director talked about what it was like to work with Korean actors.

“I am sure actors had concerns since I do not speak Korean. In order to solve that problem, I tried communicating with them as much as possible. Before shooting the film, I gave them a hand-written letter. Once we started filming, we tried having a deep conversation. Also, Song Kang-ho gave me feedback after watching the roughly edited version each day,” the director said.

The director also went on and talked about how Song inspired him to make the movie. 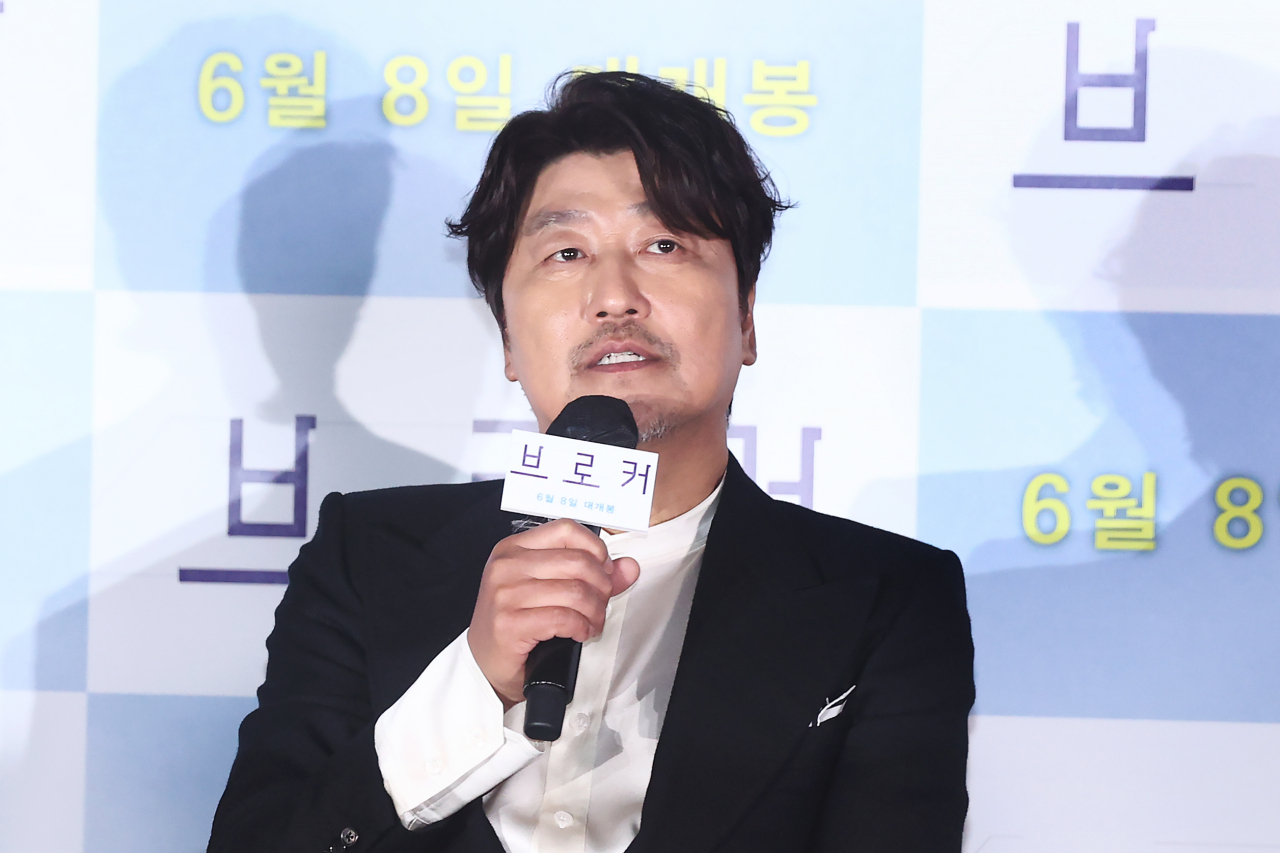 Cannes winner Song Kang-ho (Yonhap)
“A scene of Song Kang-ho gently talking to a baby in the baby box and also selling babies came to my mind. I thought about Song playing a character that has both good and evil sides and that’s where I started from,” he said.

He discovered about baby boxes while working on other projects.

Korean heartthrob Kang talked in greater detail about his character and how he prepared for it during the press conference.

“Dong-soo is from an orphanage and is also a partner of Sang-hyun who steals babies for adoption. Before filming the scenes, I had a conversation with people who used to live in orphanages. The most impressive thing for me was when they told me about how the children would get their hopes up when they heard a car come in, thinking that someone might be there to take them home. I thought that my character Dong-soo also waited for his mother like them,” he said. “Dong-soo is also a man who believes that children should grow up in a family and not at an orphanage. He also probably had some resentment (toward his mom). And realizes through So-young that his mother could have had reasons for not coming back to get him.”

The singer-turned-actor IU, also known as Lee Ji-eun, talked about a difficult scene that she had to perform.

“Since the director is Japanese, the script had swear words that did not seem natural for Koreans. So I asked if I could add some Korean swear words and the director allowed me to change it freely,” she said.” This is the first time I‘ve performed lines with swear words. So I practiced them a lot at home and was very nervous before filming.”

“I always thought that Lee Ji-eun was a great actor but I did not know that she would pull off the scene so well,” Song said.

“Another scene that I really liked was when they (Sang-hyun and Dong-soo) hop onto a van after failing to find the right parents. Sang-hyun and Dong-so do not know what to do in that scene and speak gibberish, and, just at that moment, she (IU) kicks the front seat. That was not in the script so I was really surprised and could perform a realistic reaction,” Song said. 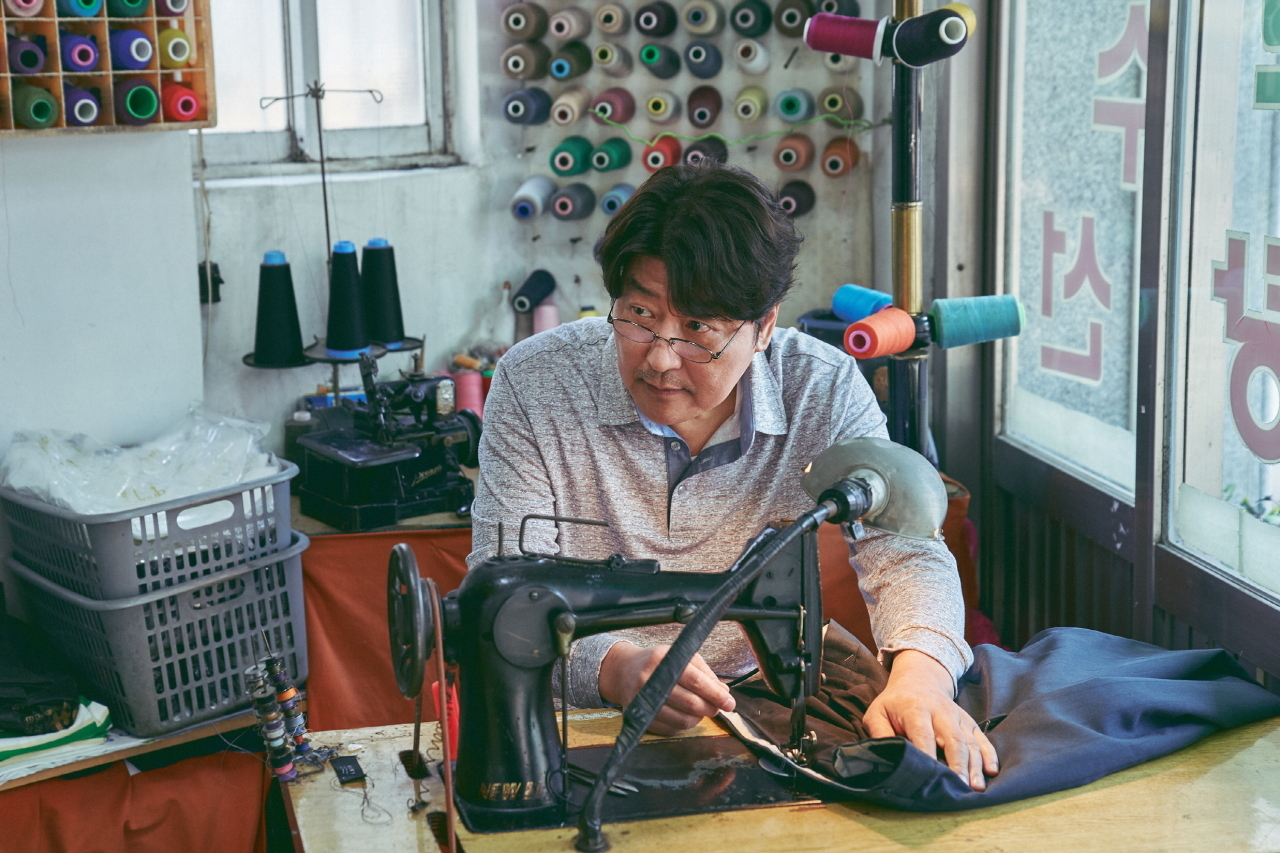