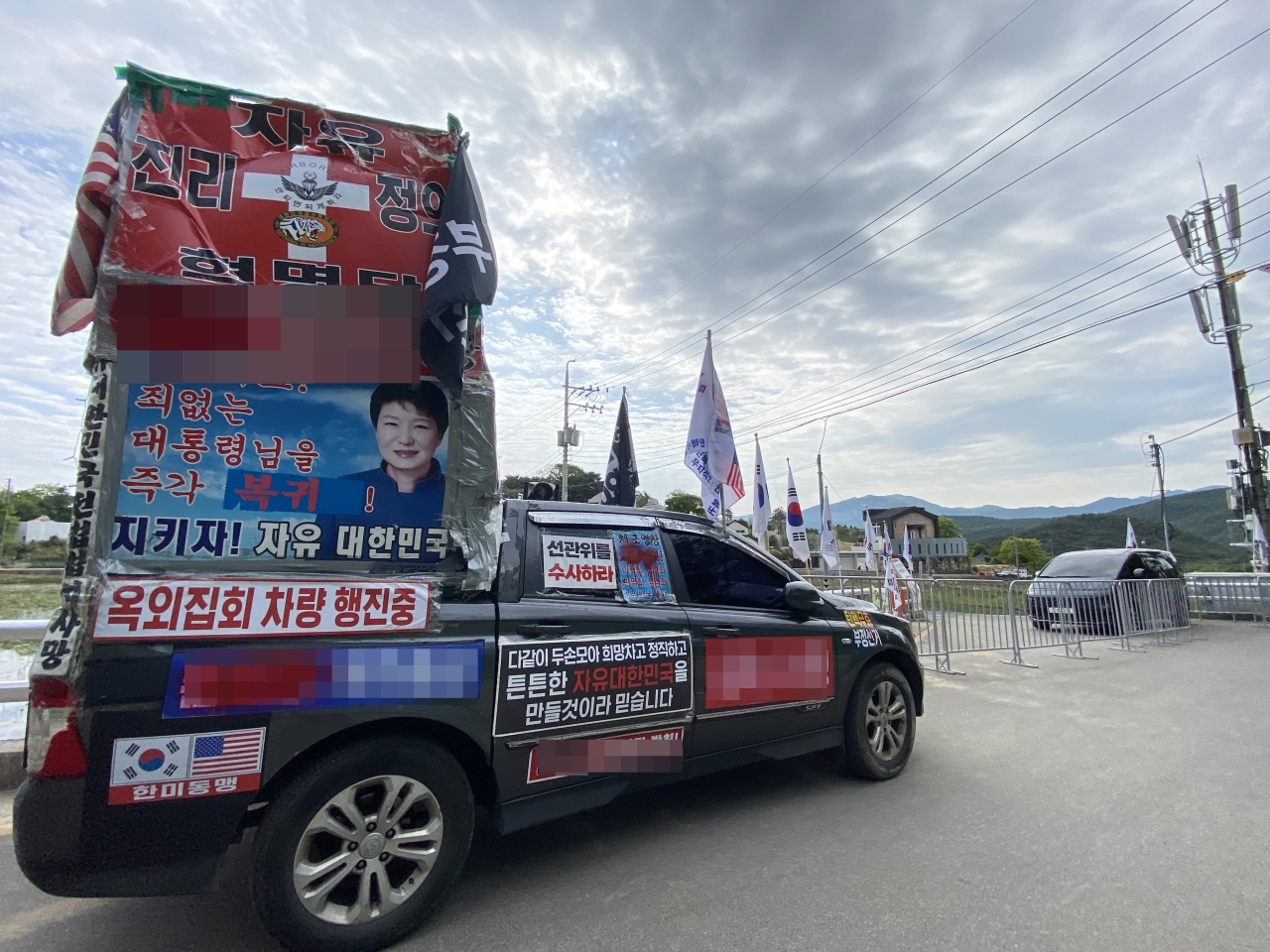 A rally vehicle parked on May 25 in front of the residence of former President Moon Jae-in Pyeongsan village, Yangsan, South Gyeongsang Province (Yonhap)


Former President Moon Jae-in has sued four people, including members of conservative groups, for protesting in front of his residence on charges of defamation and death threats.

Moon’s legal representative visited the Yangsan Police Station on Tuesday and filed a complaint on behalf of Moon and his spouse Kim Jung-sook against the four people from three protest groups.

Conservative groups and individuals have been using loudspeakers to rally on a road 100 meters away from Moon’s residence in Pyeongsan-ri, South Gyeongsang Province since May 10, right after he left office.

As six to seven conservative groups take turns holding rallies every day, shouting and swearing using loudspeakers, the residents of Pyeongsan-ri have been complaining of the loud noises. Some residents are suffering from insomnia, stress and loss of appetite, receiving treatment at the hospital.

The demonstrators cannot be punished, as they comply with the noise standards stipulated in the Assembly and Demonstration Act. The police urged the protesters to refrain from using loudspeakers at night and residents asked them to stop using swear words, but to no avail.

Moon’s secretariat released a statement on Monday, saying, “The elderly in the village are suffering indescribably from loud noises and swear words every day,” adding that it is a situation that can no longer be overlooked.

The secretariat also released videos of protest groups and members to the media saying, “We must firmly respond to the anti-rationalism that tramples on the daily lives of residents.”

Park Ji-hyun, co-chair of the Democratic Party of Korea’s emergency committee, said on her social network service on Tuesday, “Ex-President Moon is suffering from conservative rallies that curse in front of his residence every day. Abuse and noise inflicted on the outgoing president must be resolved immediately.”

Chin Jung-kwon, a political critic, said in a radio interview that he hoped President Yoon Suk-yeol would clearly say, “I don’t think this is right.” If this is allowed, the same thing could happen to President Yoon in five years, he said.

The Democratic Party is pushing for legislation to amend the Assembly and Demonstration Act and regulate “hate speech.”

Rep. Park Gwang-on said on his Facebook account, “The abusive language directed at former President Moon, who returned to Pyeongsan-ri as a citizen, is beyond words and violent. The right to use profanity is not part of an individual’s freedom to be protected.”

Now is the time for Korean society to seriously review the introduction of a law that supplements the law for privacy protection and regulates verbal violence, he said.

“The use of freedom of assembly and demonstration to deliberately spread false information in public places and incite hatred and violence should be sanctioned,” he said.

He wrote, “Through legislation, we will strengthen the protection of individual people’s human rights and try to make it an opportunity to further mature democracy.”

Currently, the Democratic Party’s Rep. Chung Cheong-rae has proposed a bill to amend the Assembly and Demonstration Act to prohib assemblies and demonstrations near the residence of the former president.