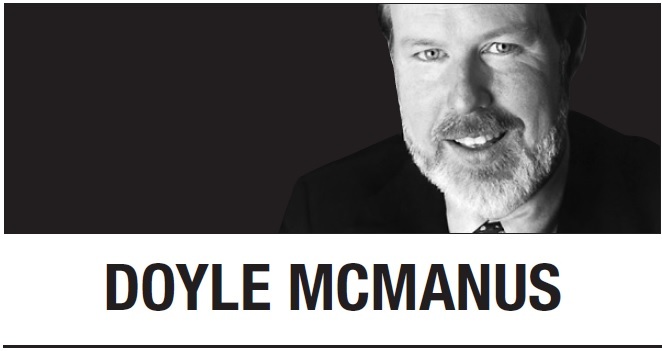 Last week, in an unscripted moment, President Joe Biden warned bluntly that if China invades Taiwan, the United States will come to the island’s defense.

“We’ve made a commitment,” Biden told reporters at a news conference in Tokyo.

That isn’t what US policy on Taiwan says -- not officially, at least.

The White House and State Department hurriedly tried to walk back the president’s words.

Biden critics called it a gaffe, but the statement wasn’t a slip of the tongue. Biden has used the same language about Taiwan three times in nine months. When a president offers his personal version of policy three times in a row, that pretty much makes it official.

What Biden did was to say openly what has been implicit for several years: The United States is willing to threaten force to deter China from invading Taiwan.

Until now, those hints were couched in a policy known as “strategic ambiguity.” The president made it less ambiguous.

China hawks hailed the rhetorical shift as a welcome burst of clarity. Others worried that it might provoke China toward reckless action.

The Chinese reaction was anger.

“If the US continues to go down the wrong path, there will be irretrievable consequences … and the US will have to bear an unbearable price,” Foreign Ministry spokesperson Wang Wenbin warned.

Why such a storm over the word “commitment“? A bit of history may help.

China considers Taiwan to be part of its national territory, and so, for many years, did the rulers of Taiwan, the US-backed losers of China’s civil war who fled to the island when the communists took power in 1949.

In 1979, when President Jimmy Carter recognized Beijing as the sole legitimate government of China, US Congress passed the Taiwan Relations Act. It committed the United States to supply weapons to the island’s government. However, it did not commit the United States to intervene militarily against a Chinese invasion; that was left ambiguous.

That balance was relatively easy to maintain when China was weaker.

But over the last two decades, China has strengthened and become an assertive regional power: building military bases in the South China Sea, bullying weaker neighbors like the Philippines and harassing Taiwan’s armed forces with air and naval incursions.

Chinese officials have derided the United States as a declining power. After the chaotic US withdrawal from Afghanistan last year, one of Beijing’s official newspapers said the lesson for Taiwan was that if war broke out, “the US military won’t come to help.”

That’s when Biden first said publicly that the United States had a commitment to defend Taiwan.

His intention, then and now, was clear: to make China’s President Xi Jinping think long and hard before considering an invasion.

But by announcing the commitment the way he did, he created consternation in his own foreign policy bureaucracy.

“I don’t think the confusion is helpful,” said Bonnie S. Glaser, director of the Asia Program at the German Marshall Fund.

Glaser supports the goal of deterring China from invading Taiwan but said it isn’t clear that Biden’s warnings will do that.

“What will deter China, and what will provoke China? It’s not clear that we know,” she said. “The Chinese believe we are testing their bottom line, seeing if they will respond if we touch on one of their core interests like Taiwan. If they think we are encouraging (Taiwan to declare) independence, they could well be tempted to use force.“

It’s also not clear whether the United States could defeat a Chinese invasion. China’s navy is the largest in the world, although its ships are smaller and less sophisticated than those of the US and its allies. A 2018 study commissioned by Congress warned that the United States “might struggle to win, or perhaps lose, a war against China.”

So to make his commitment to Taiwan stick, Biden has work to do. He has already marshaled support from Japan, Australia and other allies. His administration has been prodding Taiwan to upgrade its defenses, taking lessons from Ukraine’s success in fending off a larger invader. And Defense Secretary Lloyd Austin is expected to seek more forces in the Pacific.

Paradoxically, though, even as he strengthens deterrence, Biden needs to reassure China that the United States is not covertly encouraging Taiwan to declare independence. That means reaffirming the “One China” policy he mentioned only briefly in his remarks last week and assuring Xi that he means it when he says he doesn’t want to change the status quo.

If he can do all that, last week’s unscripted statement might one day be remembered as a step toward deterring war in Asia -- not the moment when Biden inadvertently provoked one.