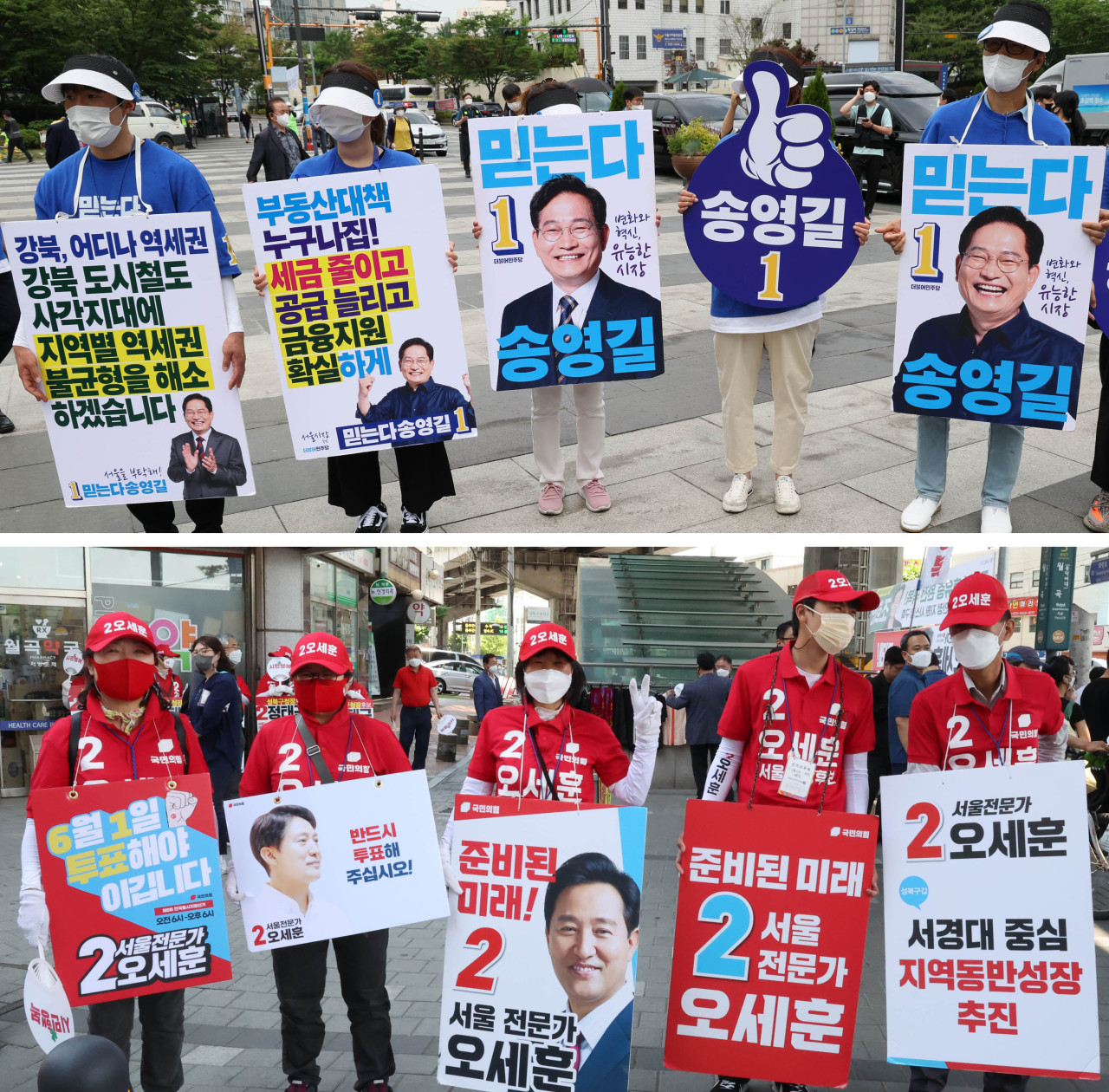 Election canvassers for Seol mayoral candidates are campaigning in the streets of Seongdong District, Seoul. (Yonhap)
South Korean voters are heading to the polls again on Wednesday for local elections, just three months after the 20th presidential election in early March.

Occurring every four years, the local elections will determine the new heads of autonomous local government units and members of local councils, including the two high-profile posts of Seoul mayor and Gyeonggi Province governor. The total number of public offices up for grabs are nearly 4,000.

The stake, however, goes beyond the control of local bodies. The outcome is seen as a litmus test of voter sentiment, after the resurgence of the right wing and the election of conservative President Yoon Suk-yeol.

Here are some of the key points to watch for in the June 1 elections.

One of the leading candidates in a race for the governorship of Gyeonggi Province – the most populous province in the country – is former lawmaker Kim Eun-hye of the ruling People Power Party.

She served as then-President-elect Yoon’s spokesperson until April.

The former MBC journalist has been described as “the biggest key official surrounding the president” by People Power Party representatives.

During a canvassing event on Tuesday, Rep. Kim Gi-hyeon said that when candidate Kim speaks to the president, the president responds informally with “all right,” demonstrating the candidate’s closeness to Yoon.

In Korea, a sitting president is required to remain politically neutral in elections.

Lee Jae-myung, who lost to President Yoon in the March presidential election by a slim margin of 0.73 percent, is running in a parliamentary by-election in the Gyeyang-gu constituency of Incheon, which takes place alongside the local elections.

His bid for the seat has made headlines, as it signaled Lee’s earlier-than-expected return to the political scene. Lee was formerly governor of Gyeonggi Province.

The Incheon seat has been left vacant since Song Young-gil, the Democratic Party candidate for mayor of Seoul, resigned from the post in April.

In Seoul, Song is up against current Seoul Mayor Oh Se-hoon. Oh, who has served as the mayor of the city three times, is highly popular. Recent polls show he is ahead of Song outside the margin of error.

Yoon also won Seoul by 4.7 percent in the presidential election.

But Song seems aware that the political tide is against him. In a press conference in April, he said he was making “yet another sacrifice” in an election that he is bound to lose for his party.

Will ‘shy Democrats’ turn up?

Pre-election polls have projected a crushing defeat for the Democratic Party, putting the party’s candidates in the lead in only 4 out of 17 major gubernatorial and mayoral races. The ruling People Power Party is seen to be ahead in 10 races, while in the other three, rival candidates are neck and neck.

The party says that there are voters who support the Democratic Party but who do not respond to or express their support to pollsters -- resulting in an underestimation of support for candidates in pre-election surveys.

“Who answers calls from pollsters these days? In western countries, if a poll has a response rate of just 2-3 percent, its results are banned from release,” said Lee Jae-myung, the Democratic Party candidate running in the parliamentary by-election in Incheon.

Song Young-gil, the Democratic Party former chairman who in opinion polls is trailing his People Power Party rival and incumbent Seoul Mayor Oh Se-hoon by nearly 20 percentage points, also said, “Don’t be let down by those poll results. They are not giving a true sense of the races.”

Provided that “shy Democratic Party” supporters do exist in meaningful numbers, it still remains to be seen if they turn up at polls to prevent the pollsters’ predictions from becoming reality.

A wave of conservative education chiefs?

In addition to mayoral and city council member positions, voters will also decide on education superintendents in 17 cities and provinces across the country.

Conservative-leaning candidates are banking on the momentum created by Yoon’s presidency to flip some seats.

The head of education seats in the 2018 by-elections were swept by progressives who won 14 out of 17 metropolitan and provincial education offices.

Though the current Seoul Education Superintendent Cho Hee-yeon is leading in the polls, the race in Gyeonggi Province appears much tighter, where progressive and conservative frontrunners are divided on issues such as a 9 a.m. school start time.