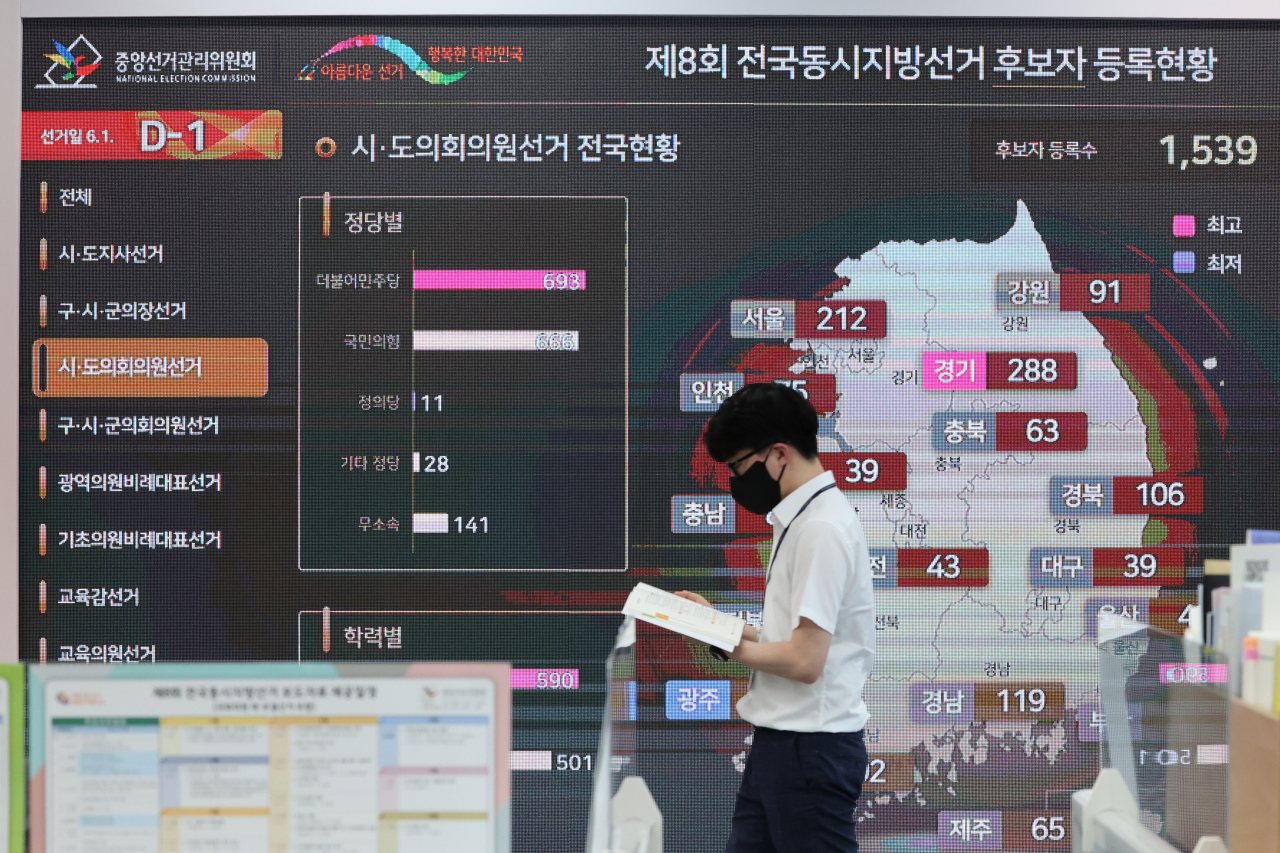 An official works in the situation room of the National Election Commission in Gwacheon, Gyeonggi Province, Tuesday, one day ahead of the June 1 local elections. (Yonhap)
Campaigns for the local elections and parliamentary by-elections wrapped up Tuesday, with political parties’ heavyweights focusing on major battlegrounds to draw voters to polling stations on Wednesday.

Leadership figures with the ruling People Power Party spent much of their energy rallying support in Gyeonggi Province, where its gubernatorial candidate Kim Eun-hye is seen to be in a tight race against Kim Dong-yeon of the main opposition Democratic Party of Korea.

Rep. Kweon Seong-dong, floor leader of the People Power Party, started his itinerary in Seongnam, Gyeonggi Province, on Tuesday morning to drum up support for Ahn Cheol-soo, the party’s candidate for the parliamentary by-election for a constituency in the city, and rally support for Kim Eun-hye.

He then traveled to join canvassing events in North Chungcheong Province and was later scheduled to meet voters in Gangwon Province.

His schedule also included appearing with Kim Eun-hye for her last campaign event in Suwon, Gyeonggi Province, on Tuesday night.

Lee was on the island to continue his criticism of the Democratic Party for its controversial pledge to close down Gimpo International Airport.

The Democratic Party spent the last day of campaigning to meet voters in Sejong and Daejeon ahead of a final rally in Seoul. The party asked voters to give support for the liberal bloc as a means to provide checks against the Yoon Suk-yeol administration.

Rep. Yun Ho-jung, chair of the emergency steering committee for the main opposition party, started his day by joining a rally for Lee Chun-hui, the party’s flagbearer for the Sejong mayoral election. Lee Chun-hui was seen in opinion surveys to be in a close race against Choi Min-ho of the People Power Party.

Yun was then scheduled to hold a press conference in Daejeon to ask voters to lend support for the party in the local elections while supporting the last day of campaigning for Daejeon Mayor candidate Heo Tae-jeong of the Democratic Party.

Park Ji-hyun, co-chair of the main opposition party’s emergency steering committee, joined Yun and Lee Chun-hui for a canvassing event in Sejong and a press conference that took place in Daejeon.

Her schedule also included traveling to Gyeonggi Province to rally support for Gwangmyeong mayoral candidate Park Seung-won before finishing her day in Yongsan-gu, central Seoul, for the final canvassing event of Song Young-gil, Seoul mayoral candidate for the Democratic Party.

Rep. Park Hong-keun, floor leader of the Democratic Party, spent the whole day in Seoul to add force to Song’s mayoral bid as well as district mayor election campaigns for the party’s flagbearers. He was also scheduled to join Song for the final canvassing event in Yongsan-gu.

Lee Jae-myung, chief of the Democratic Party’s election campaign committee and a candidate for a parliamentary by-election in Incheon, spent the last day of his campaign on the streets of the region. He is seen to be in a tight race against his rival from the People Power Party for the constituency of Gyeyang-gu.

On the sidelines of the local elections, South Korea will be choosing seven new lawmakers through by-elections. Lee Jae-myung is one of the heavyweights joining the race.

Analysts and opinion surveys have widely hinted at a strong victory for the People Power Party and its candidates in many regions, with some even forecasting the ruling party to clinch as many as 13 out of 17 metropolitan mayoral and gubernatorial elections.

“If nothing major happens until election day, I don’t see how the People Power Party would lose in this election,” Eom Gyeong-yeong, head of the local think tank Zeitgeist Institute, told The Korea Herald.

“It’s just a matter of how big the victory would be, and the Democratic Party would be lucky to clinch any region other than their traditional strongholds.”

The ruling party has been riding high on the public’s favorable reception towards the newly inaugurated Yoon administration. It has also benefited from the Democratic Party struggles with internal feuds and a series of sexual misconduct scandals.

Both parties have been encouraging voters to cast their ballots, as both believe higher voter turnout will work in favor of their candidates. Local elections usually see much lower voter turnout than other elections, meaning both parties could be losing votes.

The two-day early voting for the Wednesday elections ended with a turnout of 20.62 percent, the highest figure seen in any local election. According to the National Election Commission, more than 9.13 million of 44.3 million eligible voters cast their ballots throughout Friday and Saturday.