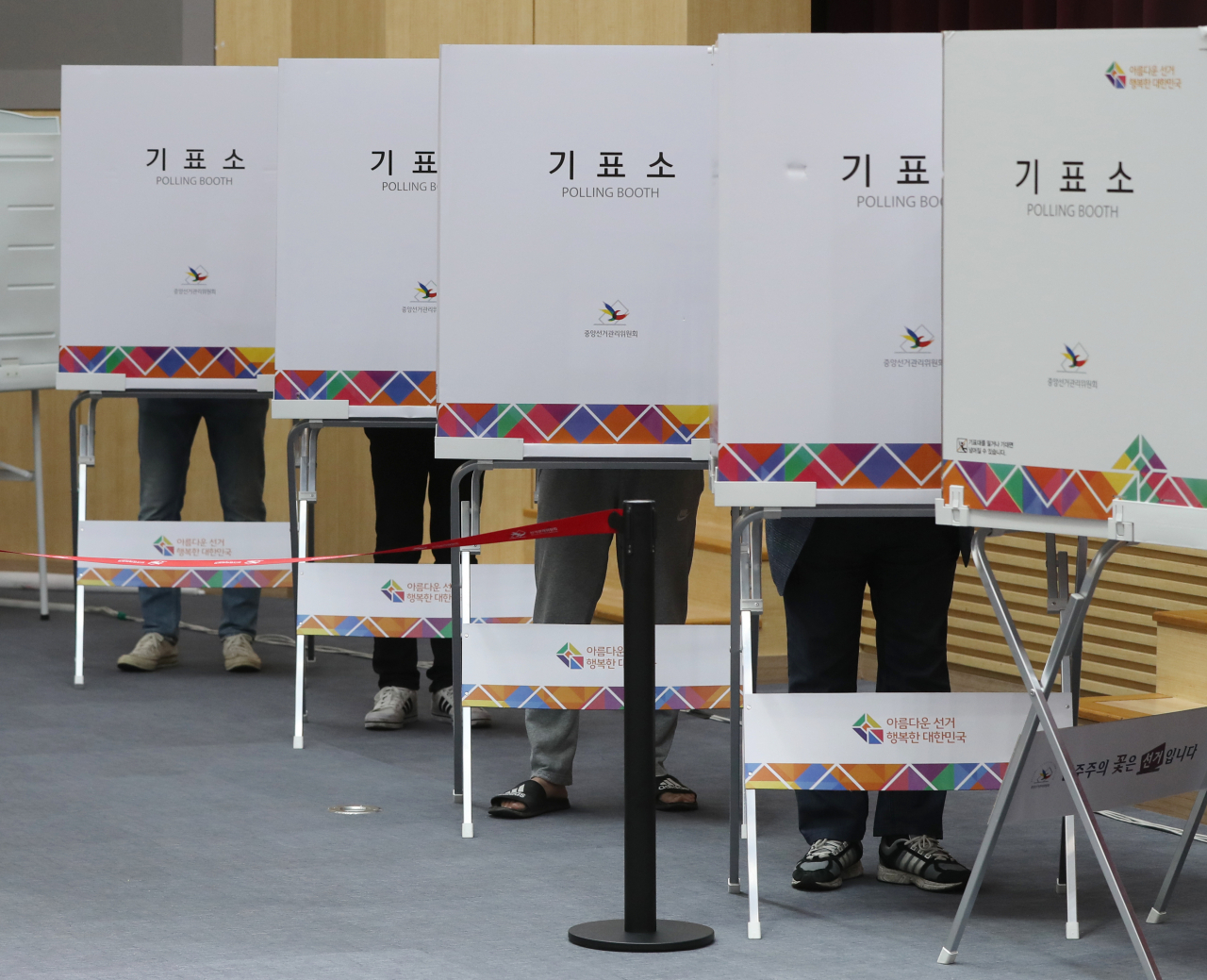 Voters mark ballots at polling booths at a voting center in Ulsan last Friday, the first day of two-day early voting for the June 1 local elections and parliamentary by-elections. (Yonhap)

The rival parties made last-ditch efforts Tuesday to woo undecided voters on the eve of nationwide local elections amid expectations the results will boost or weaken the mandate of the new government of President Yoon Suk-yeol.

Also at stake will be seven National Assembly seats in parliamentary by-elections.

The other four races are considered neck and neck, including the contest for Gyeonggi governor.

On the final day of the campaign period, the PPP appealed for support in regions ranging from the southern resort island of Jeju to Gyeonggi Province, while the DP spent the final day focusing on campaigning in Seoul and the country's central Chungcheong Province.

The elections come less than a month after Yoon took office.

The PPP hopes it can extend the momentum of the presidential election victory.

The DP has been appealing for support, saying it needs enough power to keep the new government in check.

"Taking the people's order, which called for self-reflection and reform, we have found our way to reform," DP co-interim chief Park Ji-hyun said. "We cannot give up local governments to those armed with lies, incompetence and blunt remarks."

While hoping for a complete sweep on its traditional home ground, Gyeongsang Province in the country's southeastern area, the PPP is also looking to win in key battleground provinces, such as the Chungcheong provinces and Gyeonggi Province.

It also hopes to win at least four of the seven National Assembly seats in the by-elections.

The DP, which scored a resounding victory four years ago by grabbing 14 of the 17 gubernatorial and mayor posts in the 2018 local elections, is believed to be leading only on its home turf of the Jeolla provinces as well as Jeju.

However, the liberal party claims it can turn the tables in regions like the Chungcheong provinces, Gyeonggi Province and Gangwon Province.

Of the many battlegrounds, both parties view the capital area as the most important, as half of the country's population resides there.

In particular, Seoul mayor and Gyeonggi governor elections have been traditionally regarded as key races, since the winners often become political heavyweights and take a shot at the country's presidency later.

The Seoul mayoral election has been mainly a two-horse race between current Mayor Oh Se-hoon and former DP Chair Song Young-gil. Recent polls showed Oh, who is running for a fourth term on the PPP ticket, leading Song by a wide margin.

The race for Gyeonggi governor has been largely between former lawmaker Kim Eun-hye of the PPP and former Finance Minister Kim Dong-yeon of the DP. Recent polls showed the two were running neck and neck.

When it comes to the parliamentary by-elections, all eyes are on former presidential candidates Lee Jae-myung and Ahn Cheol-soo.

Ahn, who withdrew from the presidential race to endorse Yoon, is chasing the seat representing the Bundang-A district of Seongnam, just south of Seoul, as the PPP candidate.

Lee, who lost to Yoon in the March 9 presidential election only by a razor-thin 0.73 percentage-point gap, is hoping to win the seat in the Gyeyang-B district in Incheon, 40 kilometers west of Seoul, as the DP candidate.

In the run-up to Wednesday's local elections, a proposal to relocate Seoul's Gimpo International Airport has emerged as a hot button issue recently.

The issue came to the fore after the DP's Song and Lee jointly proposed a plan to move Gimpo airport into Incheon International Airport and develop the western part of the capital area for housing and businesses.

The PPP has been denouncing the proposal, saying it is unfeasible and will negatively impact the tourist influx to the southern resort island of Jeju, considering that Gimpo airport is the main gateway to Jeju.

Both sides are also gauging the impact of the extra budget that was passed Sunday to support pandemic-hit small businesses.

In the case of the DP, the party is hoping it can overcome a recent internal feud, which was sparked by the DP co-interim chief Park's call for a sweeping reform of the party, and a sexual misconduct case involving one of its lawmakers. (Yonhap)