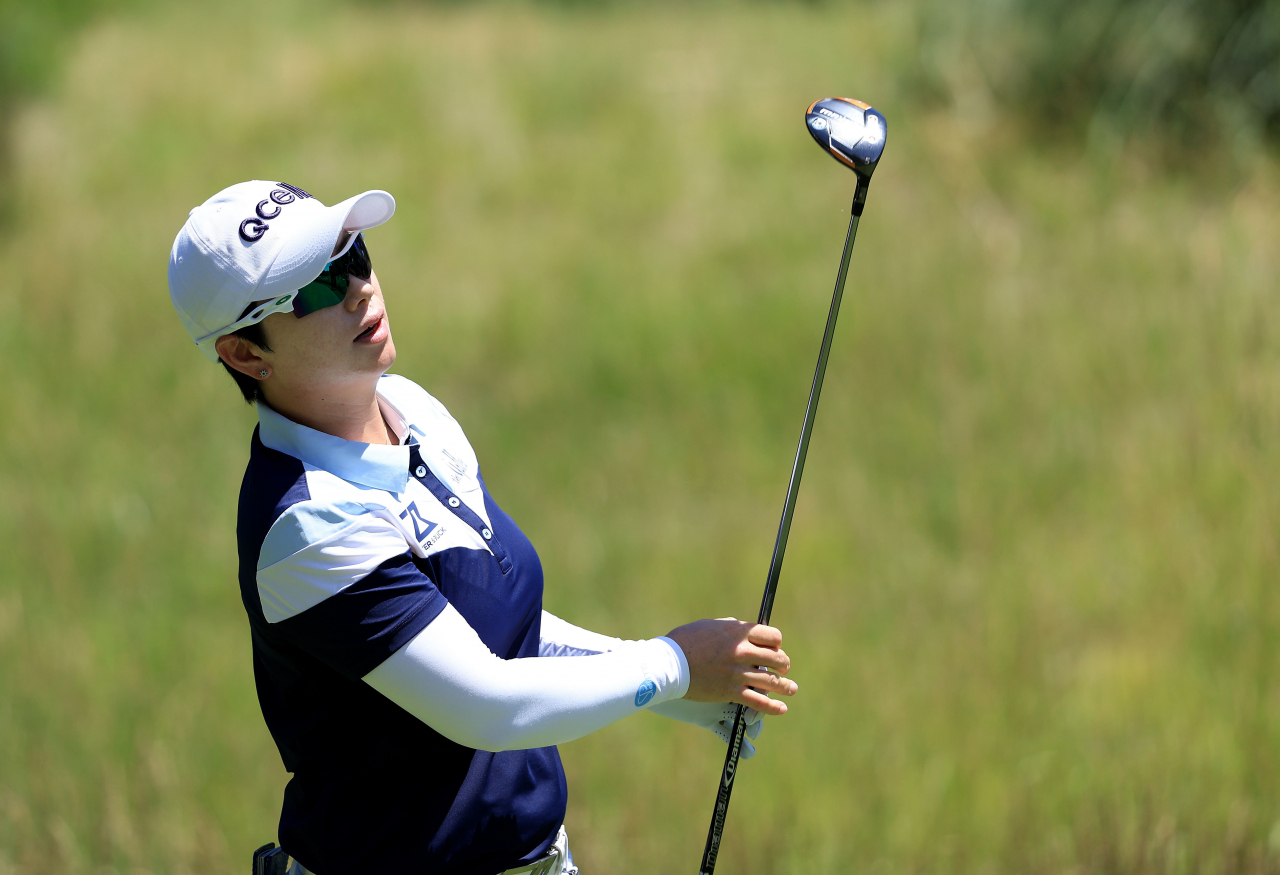 In this Getty Images photo, Ji Eun-hee of South Korea tees off on the 14th hole during the semifinals of the Bank of Hope LPGA Match-Play at Shadow Creek Golf Course in Las Vegas on Sunday. (Getty Images)

Ji defeated Ayaka Furue of Japan 3&2 in the final of the Bank of Hope LPGA Match-Play at Shadow Creek Golf Course in Sin City on Sunday (local time). Ji took home a winner's check of $225,000.

The competition began with three days of round-robin action, followed by knockout matches on Saturday and Sunday.

Then in the final, Ji emerged victorious on a windy day after a seesaw match, powered by an eagle on the par-five ninth.

This was Ji's first victory since the Diamond Resorts Tournament of Champions in January 2019. The 36-year-old is also the oldest LPGA winner from South Korea by some four years.

Ji is the third South Korean player to find the winner's circle in LPGA this season, joining Ko Jin-young from March and Kim Hyo-joo from April.

At the start of the tournament, 64 players were divided into 16 groups of four, with the group winners after three round-robin matches moving on to the knockout phase. Ji won her group by winning two matches and tying the other.

In the round of 16, Ji defeated fellow South Korean Choi Hye-jin 2 & 1, and cruised past Madelene Sagstrom of Sweden 7 & 6 in the quarterfinals.

In the final, Ji went 1-up with a birdie at the par-four third hole, where Furue committed a double bogey. But Ji picked up a bogey on the very next hole, allowing Furue, who had a par there, to pull even.

Ji missed a short par putt at the par-five seventh to give Furue an opening, and the Japanese tapped in the ball for a par to go 1-up on the South Korean.

But Ji bounced back with a birdie at the eighth hole, and the two were all tied up again.

Ji then executed her best shot of the day at the par-five ninth hole, holing out for an eagle from 97 yards out to take a 1-up lead. The ball took a couple of hops before rolling into the cup.

Ji kept up the momentum, draining a tricky, uphill par putt at the 10th hole to take a 2-up lead.

Furue responded by winning the 11th hole with a birdie, cutting Ji's lead to 1-up. But the South Korean regained her 2-up lead on the very next hole, where Furue committed a bogey.

Ji found trouble off the tee at the par-three 13th hole and ended up with a bogey after leaving her par attempt just inches short. Ji dodged a bullet, though, when Furue missed a short par putt. Ji maintained her 2-up lead with five holes to play.

After both made pars at the 14th and 15th, Ji clinched her title at the 16th.

Ji put her second shot into the deep rough left of the green and needed two strokes to put the ball on the putting surface. But the South Korean calmly buried that putt for par, putting the pressure squarely on Furue's shoulders to make her par putt and stay alive in the match.

Furue missed her attempt to the right, and Ji won the hole and the match. (Yonhap)