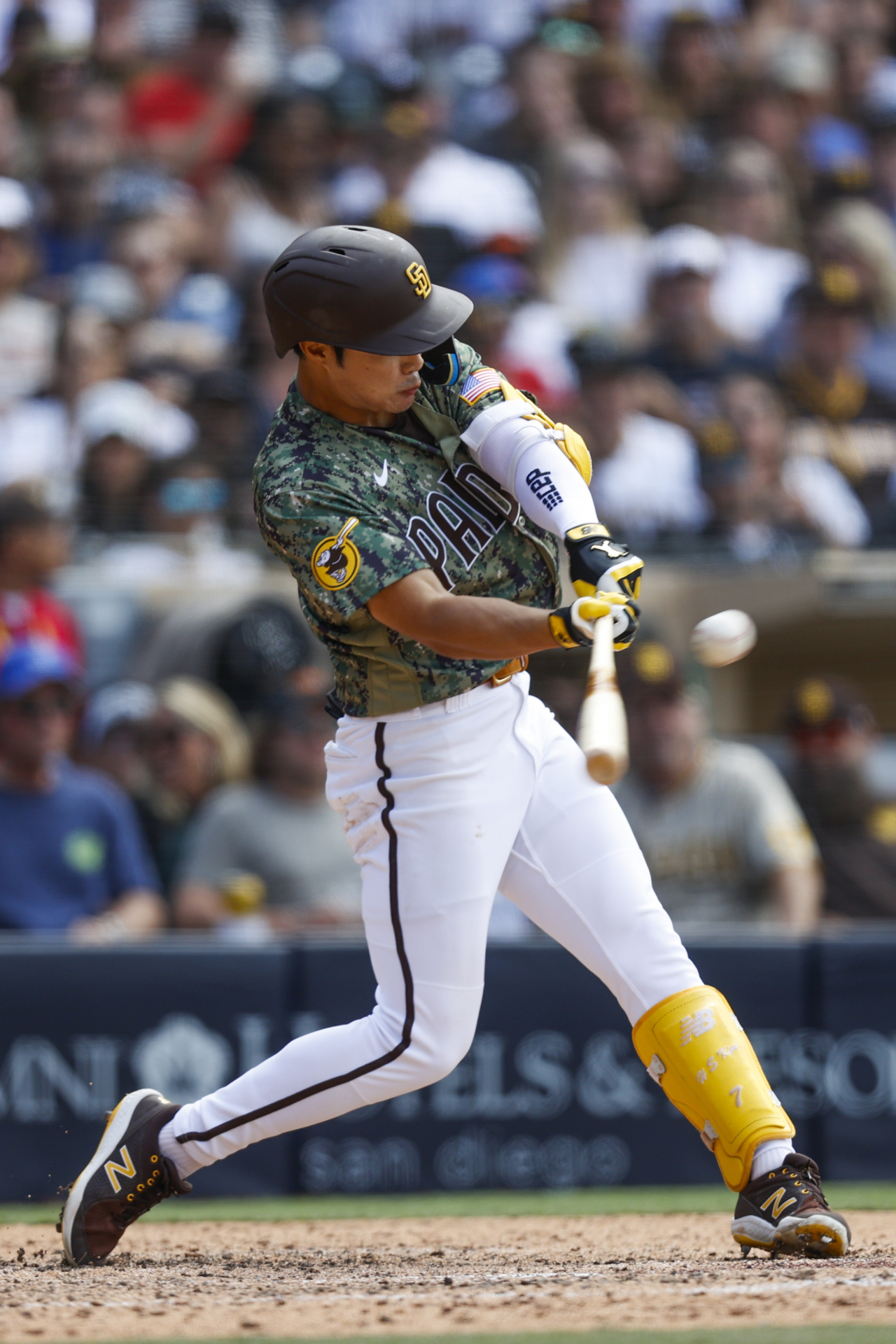 In this USA Today Sports photo via Reuters, Kim Ha-seong of the San Diego Padres hits a single against the Pittsburgh Pirates during the bottom of the eighth inning of a Major League Baseball regular season game at Petco Park in San Diego on Sunday. (Reuters)

Park Hoy-jun's first game in the majors in over a month didn't go the way he would have liked.

The South Korean utility player was called up by the Pittsburgh Pirates before their road game against the San Diego Padres at Petco Park in San Diego on Sunday (local time). Park entered the game as the pinch runner in the top of the 10th inning but was thrown out at home plate in an ill-fated attempt to break the 2-2 tie.

The Padres walked off on the Bucs with Trent Grisham's two-run blast in the bottom of the 10th.

Park was brought back up from Triple-A Indianapolis after outfielder Ben Gamel landed on the 10-day injured list with a left hamstring strain.

Park had made the Pirates' Opening Day roster but batted just 3-for-14 in five games before being optioned to the minor leagues on April 22.

Park didn't do much damage at the plate in the minors, either, batting only .229/.391/.289 in 26 games. But he can handle multiple positions in the infield and outfield. He had split his first five games this season with the Pirates at right field, shortstop and second base.

To start the top of the 10th, Park replaced Tyler Heineman as the ghost runner at second base. Park advanced to third on a sacrifice bunt. Then with two outs, San Diego reliever Luis Garcia threw a wild pitch.

Park, who had taken a sizable lead down the line, dashed home, but catcher Jorge Alfaro fielded the ball quickly after it had caromed off the backstop and then nabbed Park at the plate with a sliding tag.

While standing at third base, Park was briefly reunited with his former South Korean high school teammate, Kim Ha-seong, who was playing the hot corner for the Padres.

This was the first meeting between the two Yatap High School products in the majors. (Yonhap)