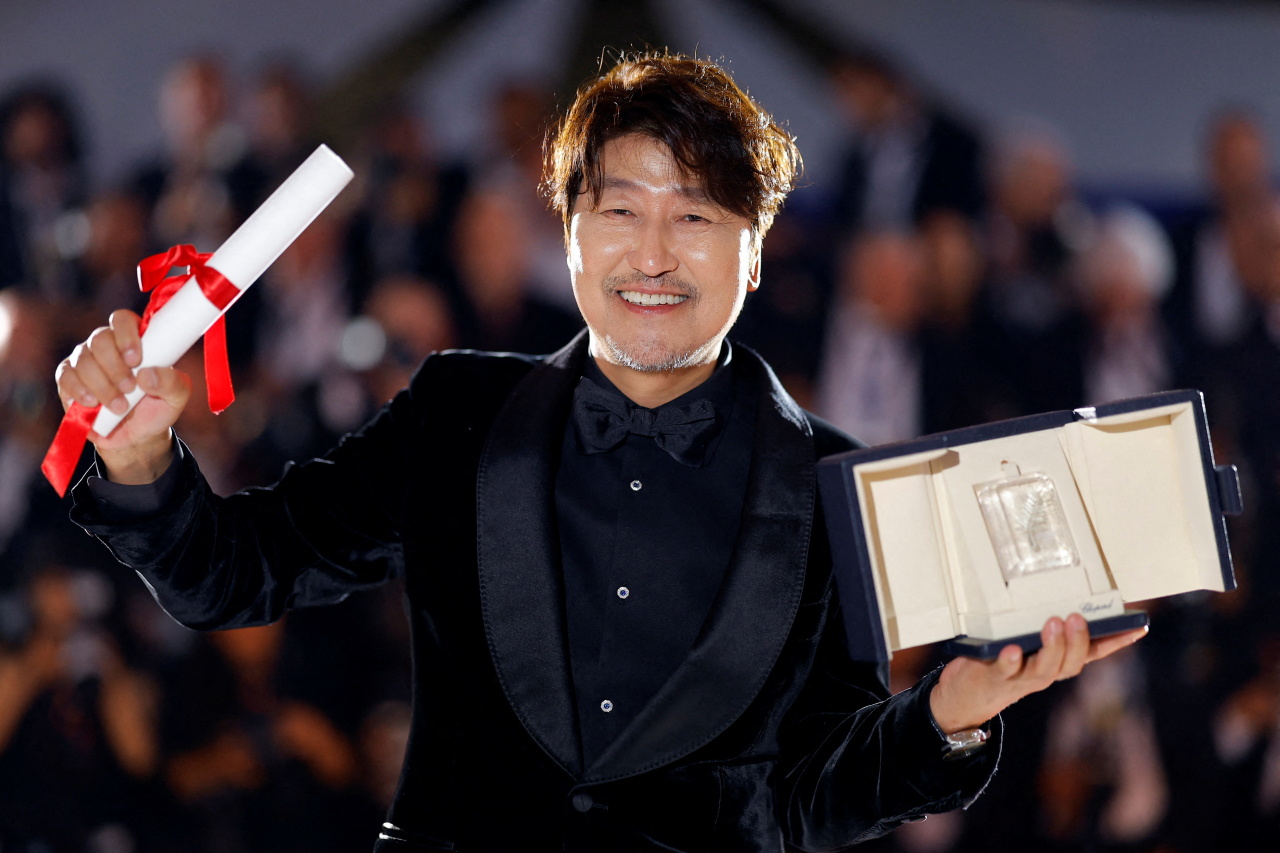 South Korean actor Song Kang-ho of “Broker” poses for photos after winning the award for best actor at the 75th Cannes Film Festival in southern France, Saturday. (Reuters-Yonhap)
Actor Song Kang-ho became the first Korean male actor to win an acting prize at the Cannes Film Festival, grabbing the award for best actor for his role as a “baby broker” in Japanese director Hirokazu Kore-eda’s “Broker” on Saturday.

This marked the 55-year-old’s seventh invitation to the prestigious film festival, but it is the first title the veteran actor has won at Cannes. Song starred in several Cannes award-winning films, including Park Chan-wook’s “Thirst” (2009) and Bong Joon-ho’s “Parasite” (2019).

Last year, Song served on the jury for the prestigious fest, as the fifth Korean to do so, following directors Shin Sang-ok and Lee Chang-dong in 1994 and 2009, respectively, actor Jeon Do-yeon in 2014 and director Park Chan-wook in 2017.

While Song has become the first Korean male actor to win the best acting prize at Cannes, Jeon received the award for best actress for her role in Lee Chang-dong’s “Secret Sunshine” in 2007, in which Song also starred as the male lead.

Song also became the third Asian male actor to win the prize at Cannes, following Hong Kong’s Leung Chiu-wai for “In the Mood for Love” in 2000 and Japan’s Yuya Yagira for “Nobody Knows” in 2004.

The film industry was betting on the veteran actor’s win even before the start of this year’s Cannes.

When “Parasite” won the Palme d’Or at Cannes in 2019, Song, who played the lead role, was a strong candidate for the best actor prize but missed the opportunity due to Cannes’ rules. The Palme d’Or and best actor cannot go to the same film, according to the festival.

In “Broker,” Kore-eda’s first Korean-language film, depicting a group of people who try to find a new family for an infant abandoned in a “baby box,” Song plays Sang-hyun, who steals an unattended child from a baby box and brokers deals with couples wanting to adopt.

Song debuted with a small role in director Hong Sang-soo’s debut film “The Day a Pig Fell into the Well” in 1996. One of the most prolific actors in the country today, Song has starred in nearly 40 films so far, showing his versatile acting.

Song has played a wide range of roles from an old-fashioned detective, a taxi driver, a drug king, a face reader, a president’s barber, a working-class father who tries to save his daughter from a monster and the designer of a giant train on which the passengers are survivors of the Ice Age.

Along with Song, director Park Chan-wook was also named best director for “Decision to Leave” at this year’s Cannes. The two have a close relationship, having worked together on “Sympathy for Mr. Vengeance” (2002), “Joint Security Area” and “Thirst.”

Song and Park attended a press meeting with Korean reporters there after the closing ceremony ended.

When the film director was asked if he would be willing to cast Song in his new movie, Park jokingly said, “I hope he does not turn me down next time. When the time comes, we’ll work together again.”

Song also expressed his wish to star in Park’s film again in the future and said, “The last time we filmed ‘Thirst’ was 13 years ago. It’s been so long ago.”