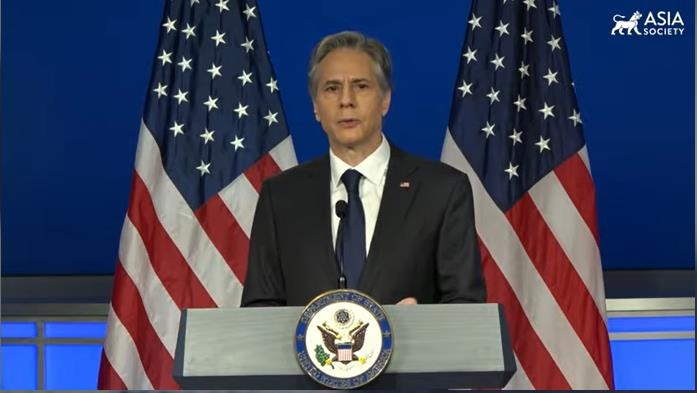 US Secretary of State Antony Blinken is seen delivering an address on US policy toward China at George Washington University in Washington on Thursday, 2022 in this image captured from the state department's website. (Yonhap)

US Secretary of State Antony Blinken on Thursday urged Beijing to work with the US on global issues, including North Korea, as he laid out US policy toward China and its intensifying power competition.

The top US diplomat insisted the two powers must cooperate on vital global issues including North Korea despite their differences.

"On non-proliferation and arms control, it's in all of our interests to uphold the rules, the norms, the treaties that help reduce the spread of weapons of mass destruction," Blinken said in an address delivered at George Washington University.

"China and the United States must keep working together and with other countries to address Iran and North Korea's nuclear programs, and we remain ready to discuss directly with Beijing our respective responsibilities as nuclear powers," he added.

Blinken's remarks come as North Korea is widely anticipated to conduct a nuclear test as part of its ongoing saber-rattling.

Pyongyang has staged 17 rounds of missile tests this year, including at least four suspected launches of intercontinental ballistic missiles (ICBMs).

Officials in Seoul have said the country appears to have completed "all preparations" for a nuclear test, which would mark North Korea's seventh nuclear test if conducted.

"Even as we invest, align and compete, or work together with Beijing where our interests come together, we can't let the disagreements that divide us stop us from moving forward on the priorities that demand that we work together for the good of our people and for the good of the world," he added. (Yonhap)