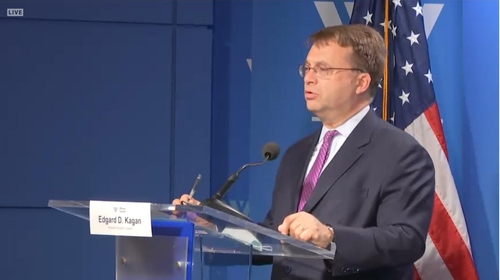 Edgard Kagan, special assistant to the president and senior director for East Asia and Oceania at the National Security Council, is seen answering questions in a seminar hosted by the Wilson Center in Washington on Thursday in this image captured from the website of the Washington-based think tank. (Yonhap)

The United States and South Korea are working to find the "right mix" of tools to address the North Korean issue, a senior White House official said Thursday.

Edgard Kagan, special assistant to President Joe Biden and senior director for East Asia and Oceania at the National Security Council, also said the countries have no illusions that there is a magic solution to the challenges posed by North Korea.

"We have no illusions that there is a magic sort of solution to any of this," Kagan said in a seminar hosted by the Wilson Center, a Washington-based think tank.

"These are long standing issues, but I think that we remain committed and I think I saw a great deal of sort of shared vision between President Yoon and President Biden on the need for making sure that we are able to do what we need to do, and at same time making sure that we send clear signals that we seek serious and sustained diplomacy," he added, referring to Biden's recent trip to Seoul for a bilateral summit with South Korean President Yoon Suk-yeol.

Biden made a three-day visit to South Korea from Friday (Seoul time) to become the first foreign leader to hold a summit with Yoon less than a fortnight since the new South Korean leader took office.

Biden's first trip to Asia, that also took him to Japan, followed a series of missile tests by North Korea. Pyongyang again fired three ballistic missiles, including an apparent intercontinental ballistic missile, on the heels of the US president's departure from Tokyo.

"I think that there is an awareness of the fact that we have certain tools and we are trying to change the mix of tools," Kagan said when asked what the US and South Korea planned to do to change North Korea's behavior.

"I think you saw very clearly a desire to both strengthen security cooperation, an emphasis on extended deterrence, which I think reflects a real discussion that's happening in the ROK," he added, referring to South Korea by its official name, the Republic of Korea.

Biden reaffirmed the US' commitment to provide a strong extended deterrence to South Korea in the summit with his South Korean counterpart.

Kagan noted the extended deterrence itself may not change the direction of North Korea's ongoing provocations.

"It is not clear to me that extended deterrence by itself is the key tool for changing the trajectory of the DPRK," he said, referring to North Korea by its official name, the Democratic People's Republic of Korea.

"I would like to think that there have not been a lot of doubts about US extended deterrence commitments to the ROK over the years, and that that isn't what has driven the DPRK's programs, which, as we all know, are extremely destabilizing and violate multiple (U.N.) Security Council resolutions," he added.

North Korea has conducted 17 rounds of missile tests so far this year. It is now widely expected to conduct a nuclear test in the near future, which would mark its seventh nuclear test, and also the first since September 2017.

Kagan said the US will work to make sure that it has "the right security mechanisms and coordination in place to be able to live up to our alliance obligations."

He also reiterated that the US remains open to dialogue.

"I think you saw the president reiterate ... our absolute commitment to our security commitments to the ROK and to Japan. The president was also clear, I think you see in the statement, that we remain very committed to serious and sustained diplomacy with the DPRK if they choose to do so, and we encourage them to do that," said Kagan. (Yonhap)