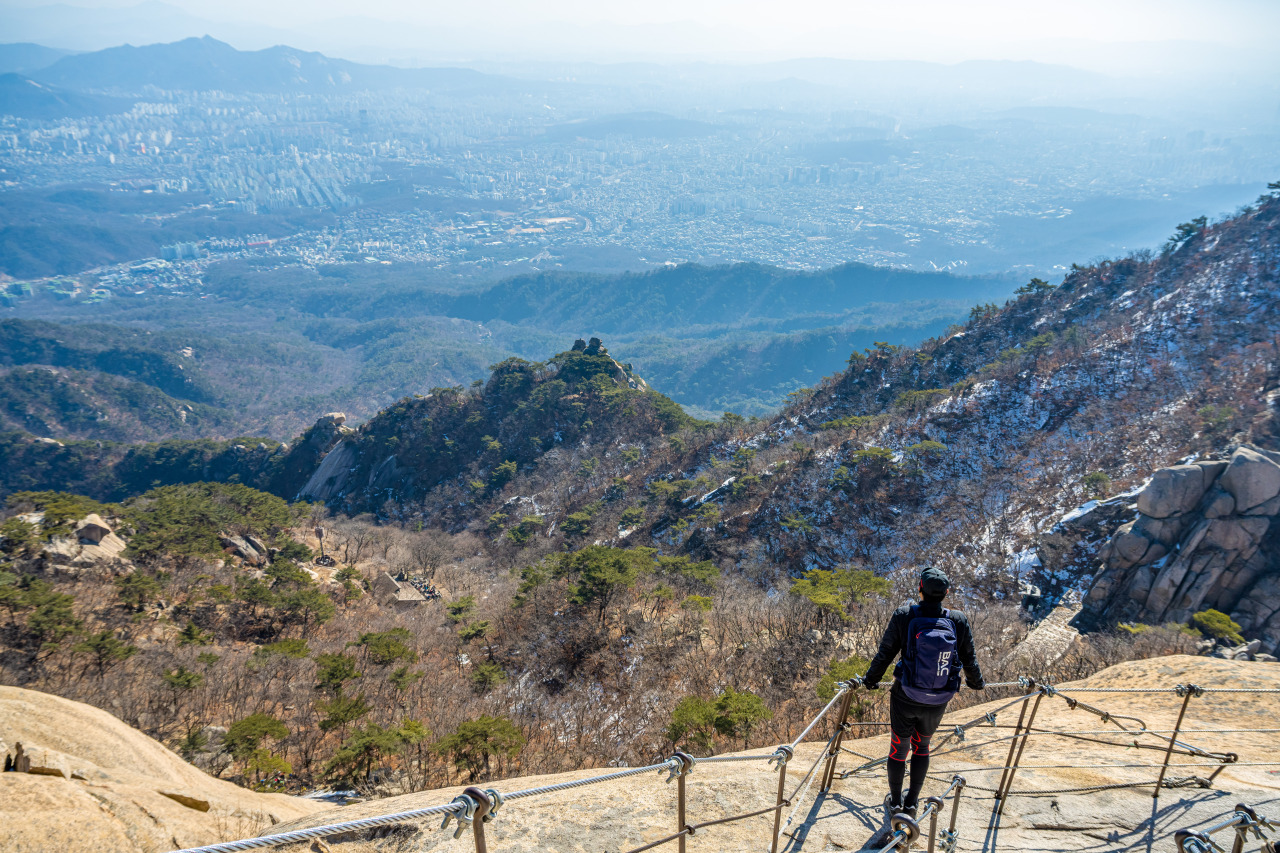 A hiker looks at the view of Seoul from the Baegundae peak of Bukhansan. (STO)
Hiking ranks as one of the top attractions on foreigners’ to-do lists when visiting Seoul, a recent survey showed, but some raised concerns over the lack of information available.

A survey conducted in April showed 83 percent of foreigners in the “Generation MZ” group -- categorized as those in their 20s to 30s in the survey -- would be willing to go on a hike while in Seoul.

In order to gauge the interests of potential incoming tourists, the joint survey was conducted by the Seoul Metropolitan Government and the Seoul Tourism Organization. A total of 1,092 foreigners from seven countries, aged 20-59, participated in the survey.

The findings showed that 67.9 percent were aware there are many mountains in the capital, which is rare in big cities around the globe.

As for the type of hiking that respondents wished to pursue in Seoul, “trekking” and “trail walking” ranked highest.

Two main reasons for choosing to hike in Seoul were, “to see the scenery and view of the city from the mountain” and “to appreciate the fresh air on the mountains.”

Typical inconveniences listed were a “lack of information facilities” and “difficulty in collecting information prior to the trip.”

By nationality, respondents from China, France, Hong Kong and Malaysia said information facilities are insufficient, while those from Japan, US and Thailand say hurdles remain in collecting information in advance.

In regard to concerns specifically on Seoul’s hiking trails, 44.3 percent of the respondents were concerned about safety issues, and 41.1 percent on lack of information facilities for foreign tourists.

To respond to such needs, a Seoul hiking tour information center is expected to be launched by the STO next month in Ui-dong, northern Seoul. The center’s major services include providing information and safety education on major hiking trails, hiking equipment rental and luggage storage services.