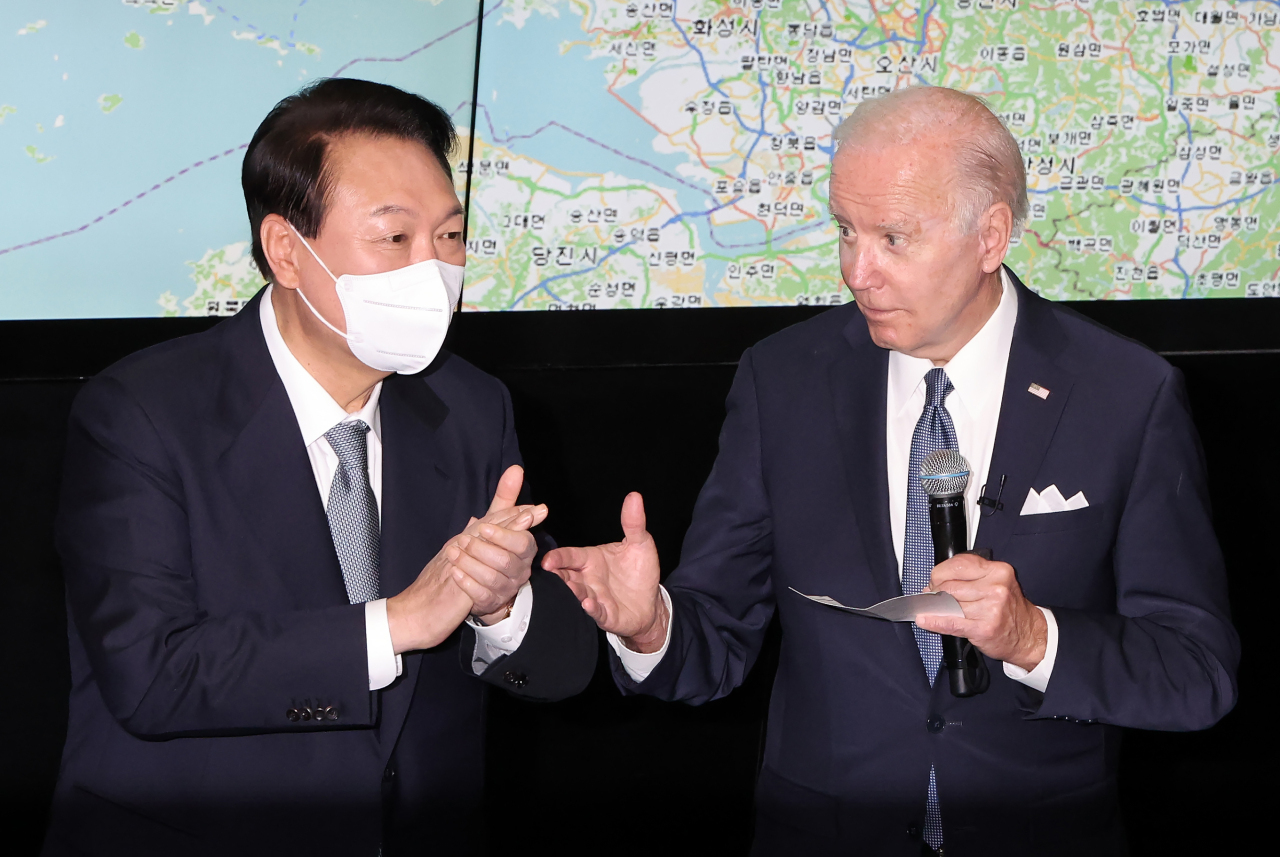 President Yoon Suk-yeol (left) and President Joe Biden at the Korean Air and Space Operations Center at the US Air Force Base in Osan on Sunday (Yonhap)
진행자: 최정윤, Brolley Genster

1) US President Joe Biden concluded his trip to South Korea after visiting a joint airspace control center on Sunday before leaving for Japan. During his three-day stay here, the two leaders reaffirmed their commitment to military and economic alliances and agreed to step up deterrence against North Korea.
*reaffirm: (계획, 아이디어 등에) 반복해 힘을 싣다, 재차 확인하다
*deterrence: 제지, 억제

2) Before ending his trip, Biden visited the Korean Air and Space Operations Center at the US Air Force Base in Osan, where the two nations’ militaries work to direct and control aerospace operations on the Korean Peninsula. (중략)“Our alliance is formed through shared sacrifices of the Korean War. And several decades later, thanks to you, the Republic of Korea is a strong thriving democracy,” the US president said, adding the stability of the Korean Peninsula is not only for Korea but also for the world.
*direct: (v) 지휘/총괄하다 (adj.)직접적인, 직통의
*thriving: 번창하는, 번화한

3) Marking the end of his three-day journey with his visit to the airspace control center, Biden departed for Tokyo later in the day. During his stay in Japan until Tuesday, the US president will attend the Quad Summit, a consultative group of four countries which include the US, Japan, Australia and India. Biden will also hold a US-Japan summit with Prime Minister Fumio Kishida.
*consultative: 자문의 consultative body/committee: 자문 기관 또는 위원회
*hold: (회의, 행사 등을) 열다, 주최하다/ (손으로) 쥐다

1) The number of metaverse users across major virtual world platforms in South Korea has dropped sharply since social distancing measures were lifted, a report showed Sunday. According to big data analysis firm Mobile Index, the number of Roblox’ weekly active users recorded 773,678 during the period between May 9 and 15, a nearly 18 percent drop from the previous weekly figure. It was the lowest number recorded since the last week of June 2021.
*drop: 감소

2) Wi Jong-hyun, a business professor at Chung-Ang University, wrote in a post on his Facebook account that the popularity of the metaverse in the country stemmed from the restrictions on outdoor activities due to the COVID-19 pandemic.
*stem from: -에 생겨나다/기인하다, -에 유래하다

3) According to Wi, the phenomenon of “metaverse fatigue” has been spreading while companies and people get tired of chasing abstract mirages that were intangible.
*fatigue: 피로/ exhaustion, tiredness
*abstract: 추상적인
*mirage: 신기루, 불가능하거나 현실적이지 않은 것
*intangible: 무형의