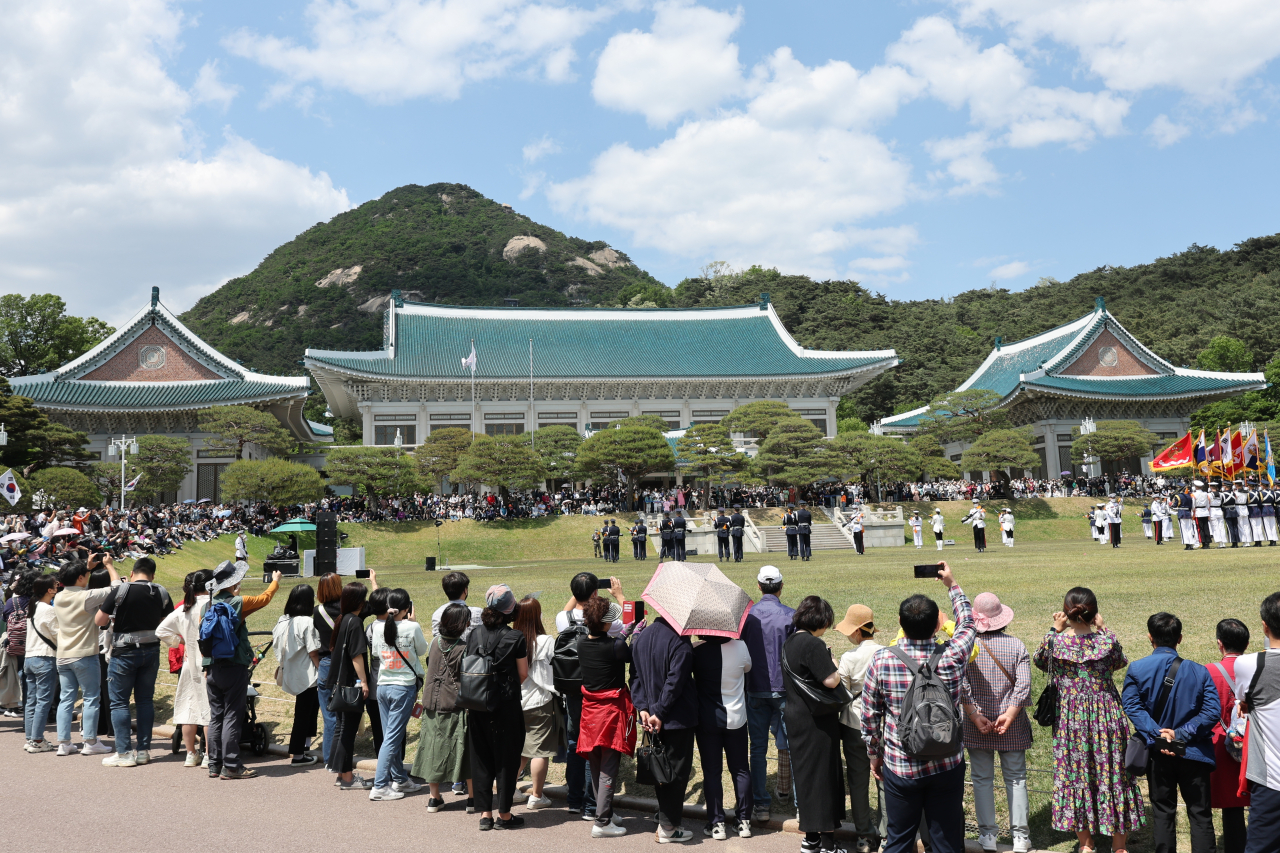 Visitors wait in line to enter the former presidential office, Cheong Wa Dae, in Jongno-gu, Seoul, on May 15. (Yonhap)
Cheong Wa Dae is unlikely to be designated a state-registered historic site, but it could be listed as a cultural heritage site, according to a Cultural Heritage Administration official.

“We are conjecturing that steps can be taken to list it as a cultural heritage site,” the official told The Korea Herald on May 10, the day of President Yoon Suk-yeol’s inauguration and the opening of the former presidential office to the public.

Yoon relocated the presidential office from Cheong Wa Dae to the Ministry of National Defense building in Yongsan-gu, Seoul.

Cheong Wa Dae, also known as the Blue House, was the site of the presidential office since 1948 when the late President Syngman Rhee took office as the first president of the Republic of Korea. Given its history, it could be registered as a contemporary cultural heritage site, the official said.

However, the site also has a long history that dates back to the Goryeo Kingdom (918-1392), when a royal palace was built on it. Records show that in the Joseon era (1392-1910), the area functioned as part of Gyeongbokgung’s rear garden. Gyeongbokgung was the main royal palace of the Joseon dynasty.

On May 3, a week before the inauguration, the presidential transition committee announced that Cheong Wa Dae’s key historical artifacts and surroundings would be restored, and that the complex would be turned into a “world-class historical and cultural space.” That plan includes the restoration of Gyeongbokgung’s rear garden. According to the master plan, research and restoration of the site and relics would be completed by 2026.

With over 377,888 visitors having entered Cheong Wa Dae in the 13-day period through Sunday, there is great interest in how the site would defined in the future. 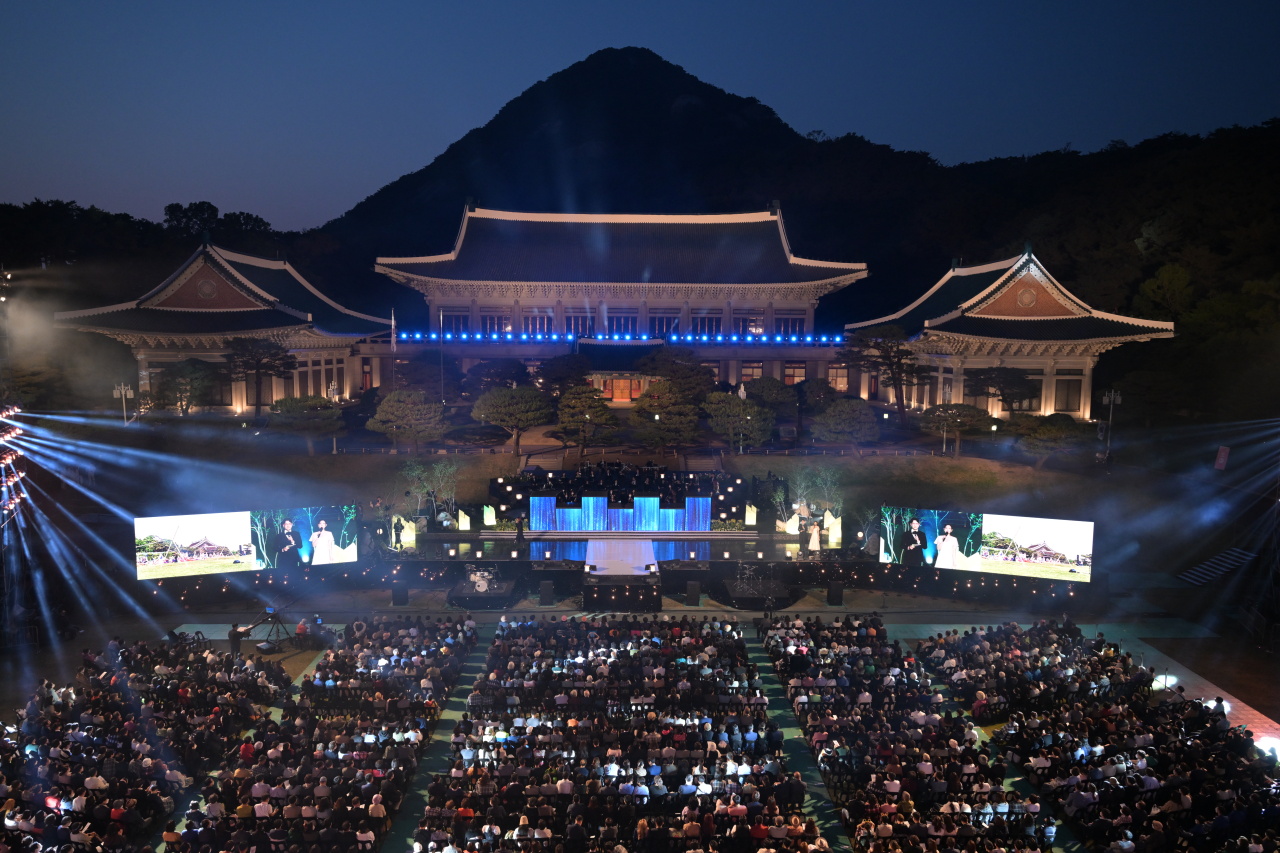 A KBS' Open Concert show was held in the garden in front of the main office building of Cheong Wa Dae, on Sunday. (Yonhap)
Which history gets priority?

The definitions of “state-designated historic site” and “registered cultural heritage” are broad. Based on precedents, state-designated historic sites are usually those that were built and formed more than 100 years ago, while registered cultural heritage sites apply to those that were built and formed around 50 years ago. The former has much stricter preservation regulations.

If Cheong Wa Dae is named a state-designated historic site, experts say any future plan for the site would likely focus on restoring the historical traces of the Joseon era. If it is registered as a cultural heritage site, the focus would be on presenting Cheong Wa Dae as part of the country’s contemporary history.

“Cheong Wa Dae buildings should not be damaged for the sake of restoring Gyeongbokgung’s rear garden,” Lee Jae-young, a professor at Hongik University’s School of Architecture and a practicing architect, told The Korea Herald.

Lee was one of the speakers at a seminar on the topic of “Gyeongbokgung rear garden’s historical significance,” jointly hosted by the CHA and Korea Association for Architectural History held on April 22.

“Would the history of royal patronage be more important than the buildings that are symbols of today’s democratic republic? Our historical paths to industrialization and to democracy directly show us where we stand today. The symbolic values of the two periods cannot be compared,” Lee said.

Lee cited the example of the remains of the Korean Provisional Government’s building in Hangzhou, China, a historic site that is protected by the Chinese government today.

“Protecting our modern and contemporary history should be the first step. Restoring part of Gyeongbokgung leads to erasing part of ourselves today,” he said.

Meanwhile, an expert in royal palaces and restoration of historical sites emphasized restoring the meaning of the site that preceded Cheong Wa Dae’s construction.

“The original site was built during Gojong’s era, so it should be managed along with the state-run Gyeongbokgung and must be designated a historic site.” Ahn Chang-mo, a professor of architecture at Kyonggi University, told The Korea Herald. Ahn was referring to King Gojong, who ruled from 1863 to 1907.

Ahn added that it is not a matter of choosing between the two categories. Rather, cultural heritage sites and treasures can be included within the realm of a historic site. This way, all buildings and relevant relics can be recognized and protected, he said.

“During the Kim Young-sam administration, parts of Gyeongbokgung and Changdeokgung areas began to be restored starting in 1993 rather hastily. This time, the process would take much longer and inevitably include having to destroy parts of the buildings that are present today, which is why things are very complicated.” Lee said.

“Focusing solely on the architectural value of the buildings, we cannot say that Cheong Wa Dae was built from thorough plans, but that does not mean it has less historical value,” Kim Young-chul, a professor at Pai Chai University in Daejeon said.

“The underlying problem is that the current government set up a deadline of 2026. Ask any expert in the field, and they will tell you it does not make any sense,” he said.

Kim mentioned the successful restoration of Berlin’s Potsdamer Platz, a bustling square in the city center surrounded by major attractions. The site was destroyed during World War II, and planning for reconstruction began in the 1980s. The planning phase alone took 10 years to complete, Kim said.

“Likewise, even if a restoration roadmap were in place, which I am sure is not the case at this point, it would impossible to finish the project in four years.”

Kim added that Cheong Wa Dae’s facilities or buildings should not be sacrificed during the excavation process to uncover traces or remains from the Joseon period. Research should precede the recovery process so that the extant facilities will not be impacted, he argued.

With regards to how the world will view Cheong Wa Dae, Ahn said that this year is the time to decide on the future meaning of the site before post-pandemic foreign tourists start coming to Korea.

“Countries will judge how much we value history and culture based on how we deal with this place. I think the opening of Cheong Wa Dae and the follow-up process will be an opportunity for Korea to be evaluated not for the country’s economic power, but for its history and culture.” Ahn said.

Meanwhile, there are some 61 cultural heritage items on Cheong Wa Dae grounds, according to the CHA.

“We are currently researching relevant cases in other countries, such as the Independence National Historical Park in Philadelphia,” a CHA official said. As several ministries and departments are drawing up plans for the future use of Cheong Wa Dae, the official said: “The final decision will be made after different ideas are shared and considered at the top level.”