NOIDA, India and SAN FRANCISCO, May 23, 2022 /PRNewswire/ -- Maneesh Sharma, previously GitHub General Manager for India, has joined LambdaTest, a leading test orchestration and execution platform, as its Chief Operating Officer. Maneesh will lead all the go-to-market functions in the company. 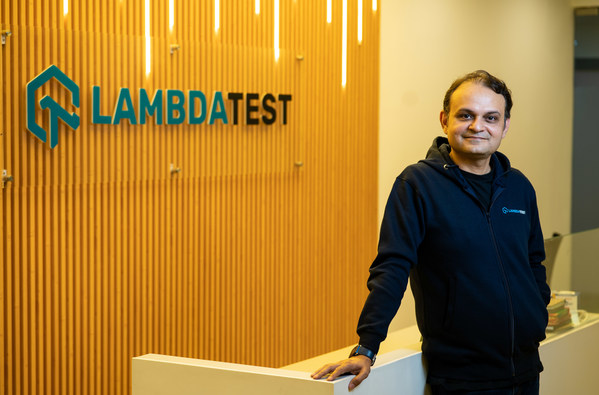 Maneesh, who has over 22 years of experience, was leading GitHub India's phenomenal growth and operations until recently. Under his leadership India was the fastest growing market at GitHub, growing to more than 8 million developers along with a strong customer base. He has also held leadership positions at top technology companies including Adobe and SAP, and was also the Java Ambassador at Sun Microsystems, where he was driving developer engagement across APAC.

"With every organization becoming a software company, customer experience is at the heart of every digital product and service. Like security, testing is also increasingly shifting left as both developers and testers build reliable and consistent product experiences. The pace of software development demands a robust and scalable testing infrastructure for organizations," said Maneesh Sharma, COO, LambdaTest. "LambdaTest has innovated with its platforms and products that help developers break away from legacy testing platforms. With roots in open source and a focus on the software testing community, I am excited to join this amazing team to help every developer build better software."

Maneesh is also active in the startup ecosystem as an investor, advisor, and above all, a sounding board for entrepreneurs. Currently, he is a part of the Training Advisory Board of the All India Management Association (AIMA), NASSCOM 10000 Startups Warehouse Steering Committee, and is also a mentor in the NASSCOM DeepTech club.

"Maneesh comes with world-class experience having led various functions and regions in global technology companies and we feel privileged to welcome him aboard LambdaTest," said Asad Khan, CEO, LambdaTest. "LambdaTest is on a mission to make the daily lives of testers and developers easier. We are building a modern testing platform that is suited for the present and future testing needs of the community and Maneesh's experience will help us immensely in taking our innovation to the global market."

LambdaTest's platform is used by over one million developers and testers globally. The company has run more than 100 million tests since its inception and has grown its business by 300% in the last year. Using the company's offerings, its customers were able to achieve 95% quicker time-to-market, increase their release productivity by 62% and identify 67% of issues prior to launch.

Over 500 enterprises and 1 mn+ users across 130+ countries rely on LambdaTest for their testing needs.

LambdaTest has raised around $70 million, to date, in funding from leading investors like Premji Invest, Sequoia Capital India, Telstra Ventures, Blume Ventures, and Leo Capital, among others.