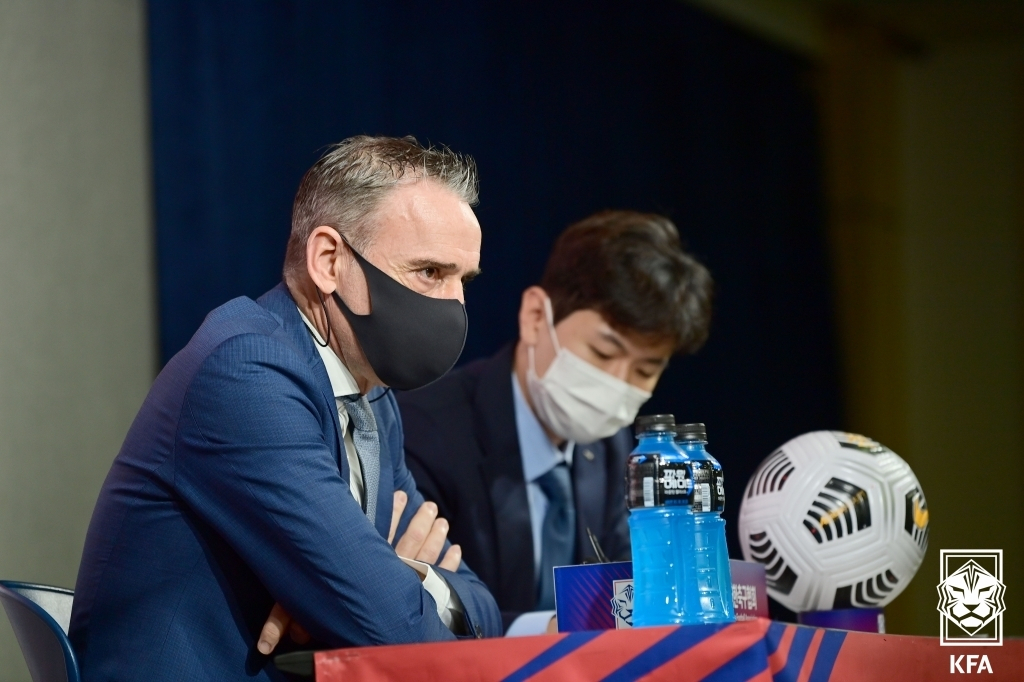 Paulo Bento (L), head coach of the South Korean men's national football team, speaks at a press conference at the Korea Football Association (KFA) House in Seoul on Monday, in this photo provided by the KFA. (KFA)

In normal times, it would be difficult enough for South Korea to take on Brazil, world No. 1 in men's football and a team that the Taeguk Warriors haven't beaten in more than two decades.

But these aren't normal times for head coach Paulo Bento and his 20th-ranked South Korea. The team will be missing a few mainstays to injuries, including sturdy center back Kim Min-jae and playmaking midfielder Lee Jae-sung.

With South Korea set to host Brazil on June 2 as the first of four friendly matches next month, scheduled to prepare South Korea for this year's FIFA World Cup, Bento predicted some challenging times ahead.

"This training camp will be the most difficult training camp we have had," Bento said at an online press conference Monday, as he unveiled his 28-man roster for the upcoming games. After Brazil, South Korea will play Chile on June 6 and Paraguay on June 10, plus an opponent to be determined later on June 14.

"But it's what we need to face (to gear up for the World Cup)," Bento went on. "In this moment, it's not important to talk too much about the schedule and the opponents. The most important thing is to try to arrange the best solutions to face three strong opponents in a short period of time."

There are other problems facing Bento, on top of those injuries. He will have to find the right mixture for a team that includes Europe-based players whose club seasons just ended this weekend and domestic league players who are in the midst of their season. And South Korea will only have three days off in between matches. The first three matches are all in different cities: Seoul on June 2, Daejeon, some 160 kilometers south of the capital, four days later and Suwon, about 45 kilometers south of Seoul, on June 10.

"All of these things, we need to take into consideration, and help players recover as fast and as well as possible," Bento said. "The gap between the games is not so long. We need to travel a little bit more than usual. It will be tough, for sure."

South Korea and Brazil will be competing at the World Cup in Qatar, beginning in November. Chile, No. 28, and Paraguay, ranked 50th, both missed out on the World Cup.

South Korea will also face Portugal and Ghana in Group G in Qatar. On paper, Ghana, one of the lowest-ranked teams in the World Cup at No. 60, appear to be a beatable team for South Korea, while No. 8 Portugal will be a much tougher test.

It stands to reason that South Korea should spend more time and energy trying to beat Uruguay, world No. 13.

Bento, for his part, said Uruguay and the three teams South Korea will play in June are "different."

"The only aspect maybe we can link all of them is the way they compete, more than specific features, the way they play tactical systems or their individual quality," Bento added. "The aggressiveness they show in every moment of the game is good. In this aspect, it can be important for us to experience that in this training camp."

Because of travel restrictions put in place during the COVID-19 pandemic, South Korea have played very few opponents outside Asia in the past couple of years. Save for some dicey moments, they weren't really pushed hard during the Asian qualification for the World Cup. Bento acknowledged that South Korea will not be able to dominate the ball possession against the three upcoming teams the way they had in Asian qualifiers.

However, that doesn't necessarily mean South Korea will undergo a drastic change to their system.

"It doesn't make sense to play in a completely different way, just because we're going to face strong teams," Bento said. "In many games during the (World Cup) qualifiers, we controlled the games, and we played more time in our offensive midfield. Now and in the World Cup, it's not going to happen in the same way. So we need to be clever and smart to understand that, and have an approach to the game that's a little bit different. This doesn't mean changing the style or the main idea."

No matter whom South Korea face, they will only go as far as their captain Son Heung-min takes them. Son is fresh off winning the Golden Boot in the Premier League, having scored a career-high 23 goals for Tottenham Hotspur, including a brace in the season finale against Norwich City on Sunday.

Son, who will certainly be the focal point for opposing defenses, will need help from his usual national team sidekicks, Hwang Ui-jo of FC Girondins Bordeaux and Hwang Hee-chan of Wolverhampton Wanderers.

The two Hwangs both had down years for their European clubs. Hwang Ui-jo, the French club's leading scorer with 12 goals in 2020-2021, finished this season with 11, with just one goal in his final 15 matches. Hwang Hee-chan transferred to the Premier League club at the start of the new season and made an early impression with three goals in his first four matches. But he added just two more goals over his next 26 games.

Bento, though, said he wasn't overly concerned about the attackers.

"It's not important to compare (players from different clubs)," Bento said. "(Son and the Hwangs) are playing a lot. The most important thing now is we check how they're going to come and try to make the best for them, as well as for players we have in the list." (Yonhap)