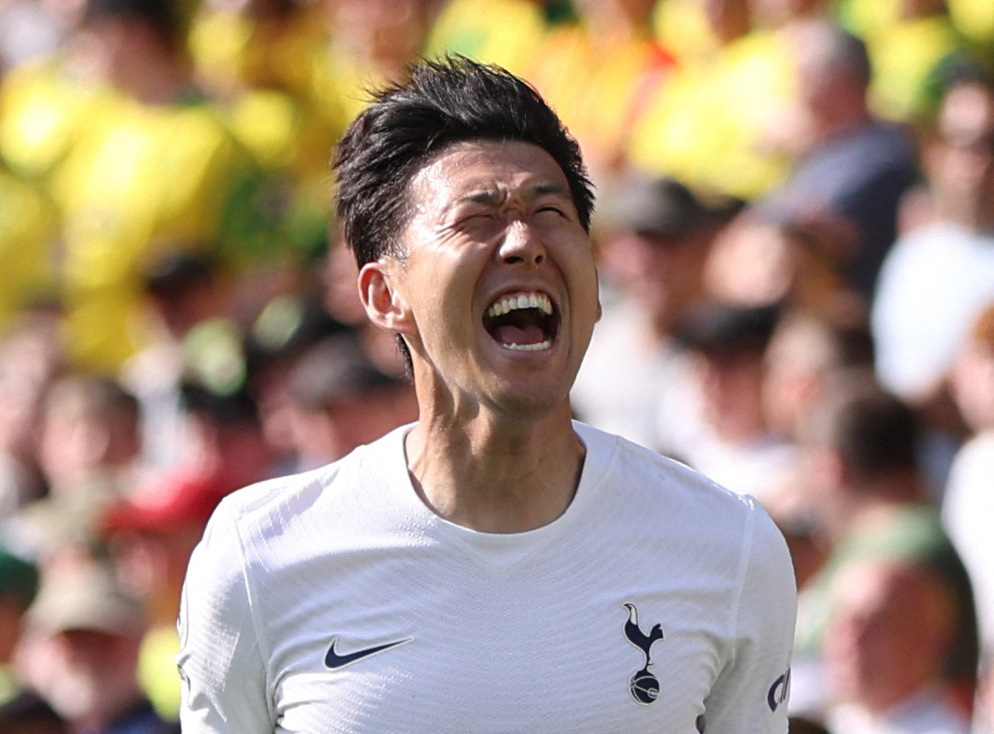 In this Action Images photo via Reuters, Son Heung-min of Tottenham Hotspur celebrates his goal against Norwich City during the clubs' Premier League match at Carrow Road in Norwich, England, on Sunday. (Reuters-Yonhap)

This is no longer a controversial thing to say, and it really shouldn't have been for some time now: Son Heung-min of Tottenham Hotspur may just be the GOAT in South Korean football history, as in, the greatest of all time.

The 29-year-old further cemented his case by becoming the first Asian player to win the Golden Boot in Premier League history.

Son grabbed a brace in a 5-0 victory over Norwich City at Carrow Road in Norwich, England, on Sunday (local time), finishing the season with 23 goals. Son and Mohamed Salah of Liverpool shared the Golden Boot as the co-leaders in goals in the top English competition for the 2021-2022 season.

South Korean football fans of a certain generation may balk at anointing Son as the greatest ever, and they would point to Cha Bum-kun, a star in his own right in Germany in the 1980s.

But whatever Cha did in the Bundesliga, first with Eintracht Frankfurt and later with Bayer Leverkusen, Son has done better, and has done so in a league, even adjusted for era, widely considered more competitive than the top German circuit.

Cha's single-season record for most league goals in Europe by a Korean player, 17 from the 1985-1986 season, stood a little longer. Son matched that total in 2020-2021 and shattered it with the Golden Boot-winning total of 23 this season.

Son finished the season with a new career-high 24 goals in all competitions, two more than last year. Son now owns the four greatest scoring seasons in Europe by a South Korean player.

And by going off for 12 goals in his final 10 league matches this season, Son now possesses something that Cha never had -- a scoring title.

"I can't believe it," Son told BBC after winning the Golden Boot. "I dreamed of it as a child. Literally, it's in my hands."

Son admitted that he was "really frustrated" at not being able to convert on earlier opportunities, with Norwich City goalkeeper Tim Krul coming up with huge saves.

And then with Tottenham up 3-0, Son scored twice in six minutes.

"I didn't give up. I wanted to score today," Son said. "I told the players I missed the easiest chances and scored one of the toughest ones."

The one area where Cha still holds an edge over Son is in trophies. Cha captured two UEFA Cups and one DFB-Pokal trophy in Germany. Son has had two runner-up finishes so far, at the 2018-2019 UEFA Champions League and 2020-2021 Carabao Cup.

Park Ji-sung, former Manchester United midfielder who also has a strong case in the GOAT conversation, remains one of the most decorated Asian players ever. He won four Premier League titles, three League Cups, four Community Shields, one Champions League title and one FIFA Club World Cup title as a member of Man United.

Son himself has his moment in the European final three years ago, when Tottenham lost to Liverpool 2-0. He will take another crack at joining Park in the exclusive company next season.

Tottenham, thanks to their win Sunday, sealed their Champions League berth for 2022-2023. It will be their first appearance in the top club tournament since 2019-2020. (Yonhap)