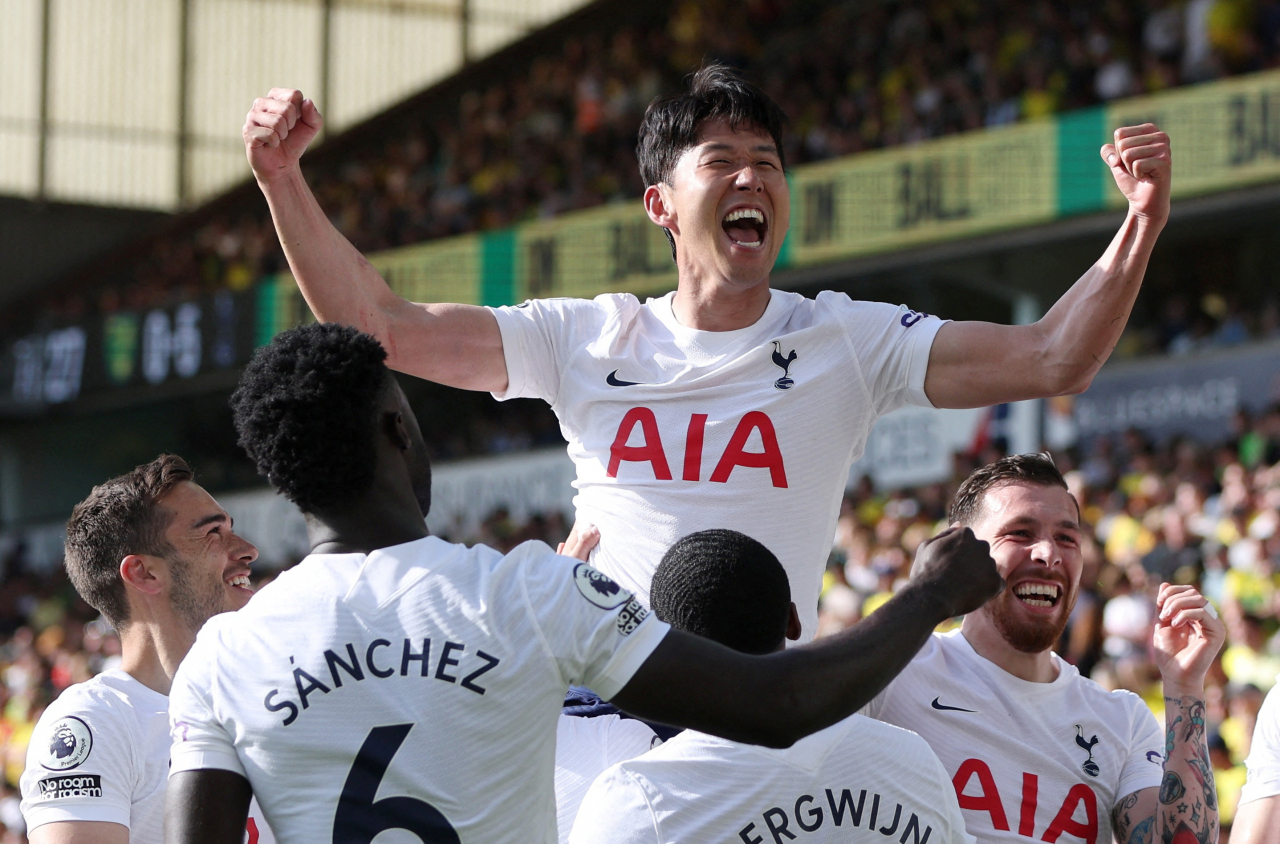 In this Action Images photo via Reuters, Son Heung-min of Tottenham Hotspur (C) celebrates his goal against Norwich City during the clubs' Premier League match at Carrow Road in Norwich, England, on Sunday. (Reuters-Yonhap)

Tottenham Hotspur's South Korean attacker Son Heung-min has become the first Asian player to win the scoring title in the Premier League, the latest piece of history for a player who has made a career out of setting records and milestones.

Son scored twice in Tottenham's 5-0 rout of Norwich City at Carrow Road in Norwich, England, on Sunday (local time), and finished the 2021-2022 season with a career-high 23 goals.

Son shared the Golden Boot with Mohamed Salah of Liverpool, who scored late in his team's 3-1 win over Wolverhampton Wanderers on Sunday.

In the Premier League, scoring titles are shared if multiple players finish the season with the same goal total, rather than using matches played or other categories to break ties. Salah, his Liverpool teammate Sadio Mane and Pierre-Emerick Aubameyang of Arsenal shared the honor for the 2018-2019 season, the last time the Premier League had co-winners of the Golden Boot.

Son, 29, established new career bests this season with 23 goals in the Premier League and 24 goals in all competitions.

Tottenham built a 2-0 lead in the first half, and Son's teammates looked to set up their South Korean star for the Golden Boot.

Norwich City's goalkeeper Tim Krul tried his best to foil Son's bid, denying him on a couple of dangerous looks early in the second half.

Once Dejan Kulusevski put Spurs up 3-0 with his second goal of the match in the 64th, the ball started finding its way to Son with even more frequency.

Son finally scored his 22nd of the season in the 70th minute to pull into a tie with Salah. Lucas Moura smartly flicked the ball in Son's direction with a touch pass after taking the feed from Harry Kane, and Son made no mistake with his right foot from just inside the box.

Five minutes later, Son momentarily moved ahead of Salah with his 23rd. Christoph Zimmermann's clearing attempt of a Tottenham free kick landed on Son, who cut in from the left side of the box and fired the ball into the bottom right corner to make it 5-0 Tottenham.

Son was mobbed by teammates in a wild celebration. Salah scored late in his match at Anfield, and the two finished tied atop the leaderboard.

With this victory, Tottenham sealed their spot in next season's UEFA Champions League victory. Spurs finished in fourth place with 71 points, two ahead of their North London rivals Arsenal. Tottenham will be making their first appearance in the top European club competition since the 2019-2020 season. (Yonhap)