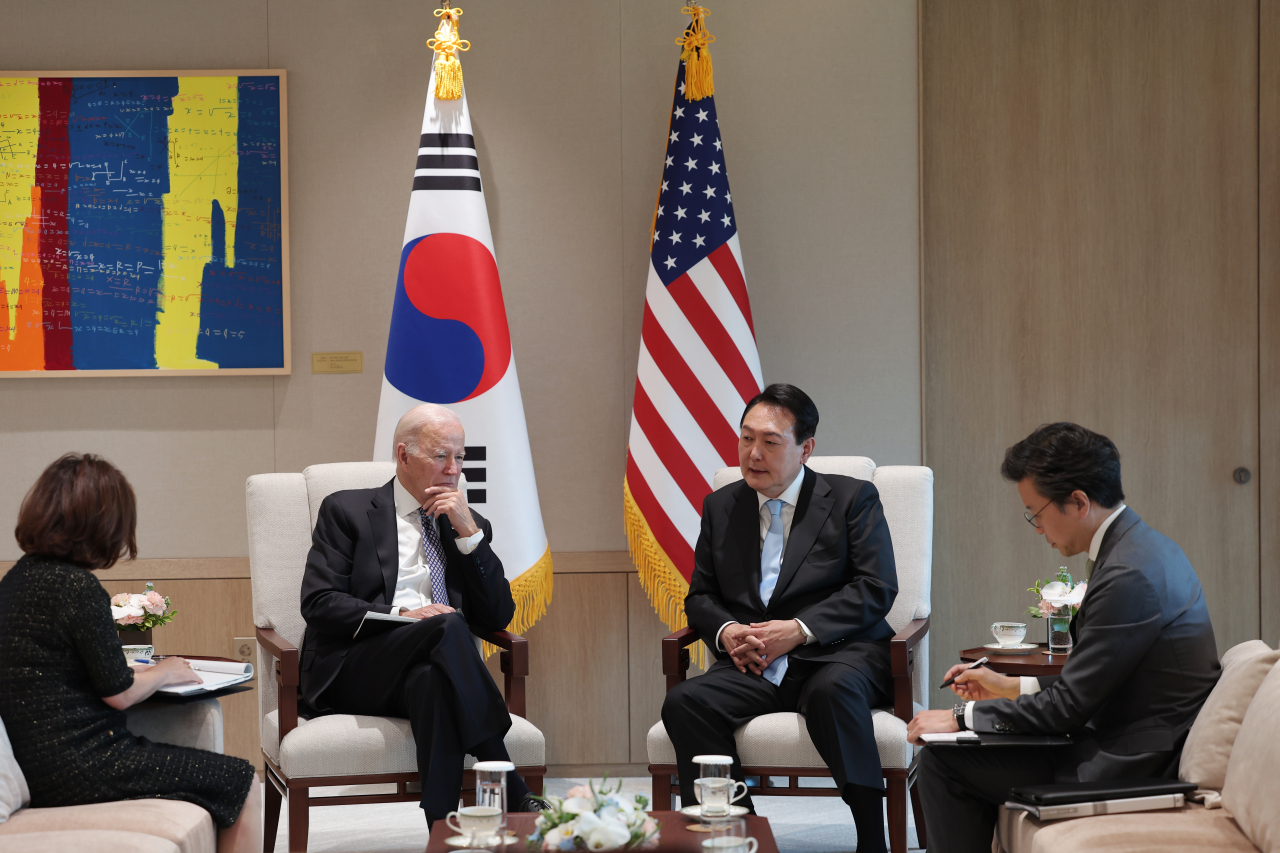 President Yoon Suk-yeol (R) and U.S. President Joe Biden (L) hold a summit at the presidential office in Seoul on May 21, 2022. (Yonhap)
The leaders of South Korea and the United States on Saturday agreed to step up combined military exercises against North Korea’s mounting threats and reinforce the US’ extended deterrence.

During their first summit, South Korean President Yoon Suk-yeol and US President Joe Biden discussed ways to strengthen their combined defense posture at a juncture when North Korea has continued pursuing the development of nuclear weapons and missiles.

"President Yoon and I committed to strengthening our close engagement and work together to take on challenges of regional security, including addressing the threat posed by the Democratic People's Republic of Korea, by further strengthening our deterrence posture and working toward a complete denuclearization of the Korean Peninsula," Biden said at the press conference following the summit in Seoul.

Extended deterrence is the US’ commitment to deter or respond to adversaries’ coercions or nuclear and non-nuclear military attacks on US allies and partners. The US nuclear umbrella is one means the US offers to achieve extended deterrence.

Biden and Yoon agreed to work together to strengthen deterrence against North Korea by reinforcing the South Korea-US combined defense posture.

To that end, both sides committed to reactivate the vice ministerial-level Extended Deterrence Strategy and Consultation Group. The last meeting of the EDSCG between South Korean and US vice ministers of foreign affairs and defense was held in January 2018.

Yoon and Biden also agreed to “initiate discussions to expand the scope and scale of combined military exercises and training on and around the Korean Peninsula,” the joint statement read, citing the “evolving threat” posed by North Korea as the reason.

The two leaders also reaffirmed the US’ commitment to deploy US strategic assets “in a timely and coordinated manner as necessary.” They pledged to reinforce such measures and come up with new or additional steps to strengthen deterrence in the face of North Korea’s destabilizing activities.

Speaking at the summit’s press conference, Yoon said the two leaders “shared the view that strong deterrence against North Korea is of the utmost importance under the shared understanding that security should never be compromised.”

Yoon explained that he and Biden discussed the timely deployment of various kinds of nuclear and non-nuclear strategic weapons to strengthen the viability of  the US’ extended deterrence. Yoon added that the National Security Councils of the two countries will continue detailed consultation on the agenda topic.

Yoon said that during the summit, South Korea and the US also shared views on how to conduct “various forms” of combined military exercises to prepare for different contingency scenarios, including North Korea’s “nuclear attacks.”

The Yoon administration has pursued a two-pronged approach of simultaneously enhancing the viability of the US’ extended deterrence and strengthening the South Korean military’s independent capabilities to counter North Korea’s mounting missile and nuclear threats.

In particular, Yoon seeks to reinforce the US’ extended deterrence by operating the high-level EDSCG and conducting regular exercises involving US strategic assets such as strategic bombers, aircraft carriers and nuclear-powered submarines.

Yoon also has pledged to resume theater-level, large-scale field training exercises which have been suspended since the first US-North Korea summit in June 2018.

Against that back drop, Kim Tae-hyo, first deputy director of the presidential National Security Office, on Wednesday said that the Yoon administration’s priority during the summit is to come up with an “action plan to make the US extended deterrence credible and effective.”