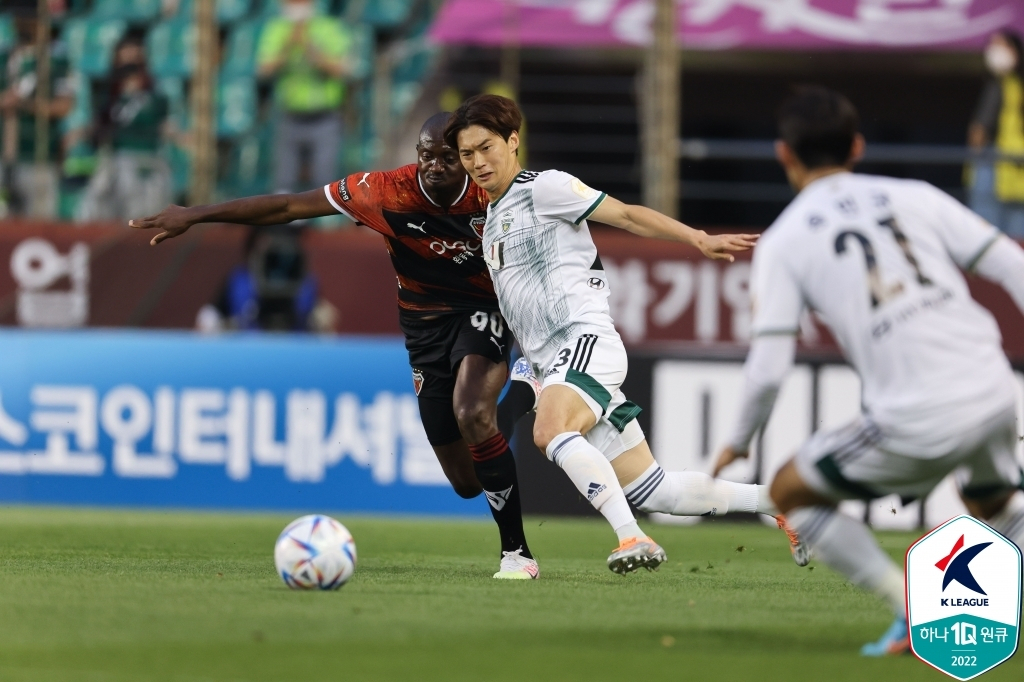 Moses Ogbu of Pohang Steelers (L) and Kim Jin-su of Jeonbuk Hyundai Motors battle for the ball during the clubs' K League 1 match at Pohang Steel Yard in Pohang, 370 kilometers southeast of Seoul, on Wednesday, in this photo provided by the Korea Professional Football League. (Yonhap)

A quick glance at the K League 1 tables will show Ulsan Hyundai FC leading the pack by eight points after 13 matches.

That lead seems comfortable enough, but Ulsan players are probably hearing the footsteps of five-time defending champions Jeonbuk Hyundai Motors, who have climbed into third place with 22 points, on the strength of an eight-match undefeated run.

Jeonbuk will look to close that gap further on the weekend, while Ulsan, runners-up to Jeonbuk in each of the past three seasons, will try to stay out in front with enough room to breathe.

Jeonbuk will visit Suwon FC at Suwon Stadium, some 45 kilometers south of Seoul, at 7 p.m. Sunday. Suwon FC are currently in 11th place with 12 points, and on paper, they appear to be the overwhelming underdogs. But Suwon FC have been a thorn on Jeonbuk's side of late.

In 2021, Suwon FC were the only club to go undefeated against Jeonbuk, with two wins and two draws. This year, Jeonbuk eked out a 1-0 win in the season opener on Feb. 19.

Ulsan will face Gimcheon Sangmu FC at 7 p.m. Saturday, hoping for a better result against the military team than the scoreless draw they had on Feb. 20.

Jeju United also have 22 points, the same total as Jeonbuk, but they are in second place thanks to their edge in goals scored, 16-14. Losing to Ulsan on a last-gasp goal Wednesday stung, as Jeju tried to close the gap on the leaders. Jeju will host surging Suwon Samsung Bluewings on Sunday.

Suwon Samsung have three wins and one loss since Lee Byung-geun took over as head coach at the end of April, though all three wins have come at home.

Pohang Steelers have slipped out of a battle for second place by losing their past two matches. They will look to regroup Saturday against Incheon United, currently two points ahead of Pohang in fourth place at 21.

Incheon striker Stefan Mugosa is building an early MVP case. He leads the K League 1 with 11 goals, including two Tuesday against Daegu FC.

Also Saturday, last-place Seongnam FC will visit FC Seoul for a shot at winning for just the second time this season.

Gangwon FC snapped their eight-match winless skid Wednesday by beating FC Seoul 1-0. Next up will be Daegu FC on Sunday.

Gangwon and Daegu both have 14 points, but Daegu sit one spot ahead in the tables in ninth by virtue of leading Gangwon in goals scored, 17-13.

Gangwon won their first meeting against Daegu 2-0 on March 5. That had been Gangwon's most recent victory until Wednesday night. (Yonhap)