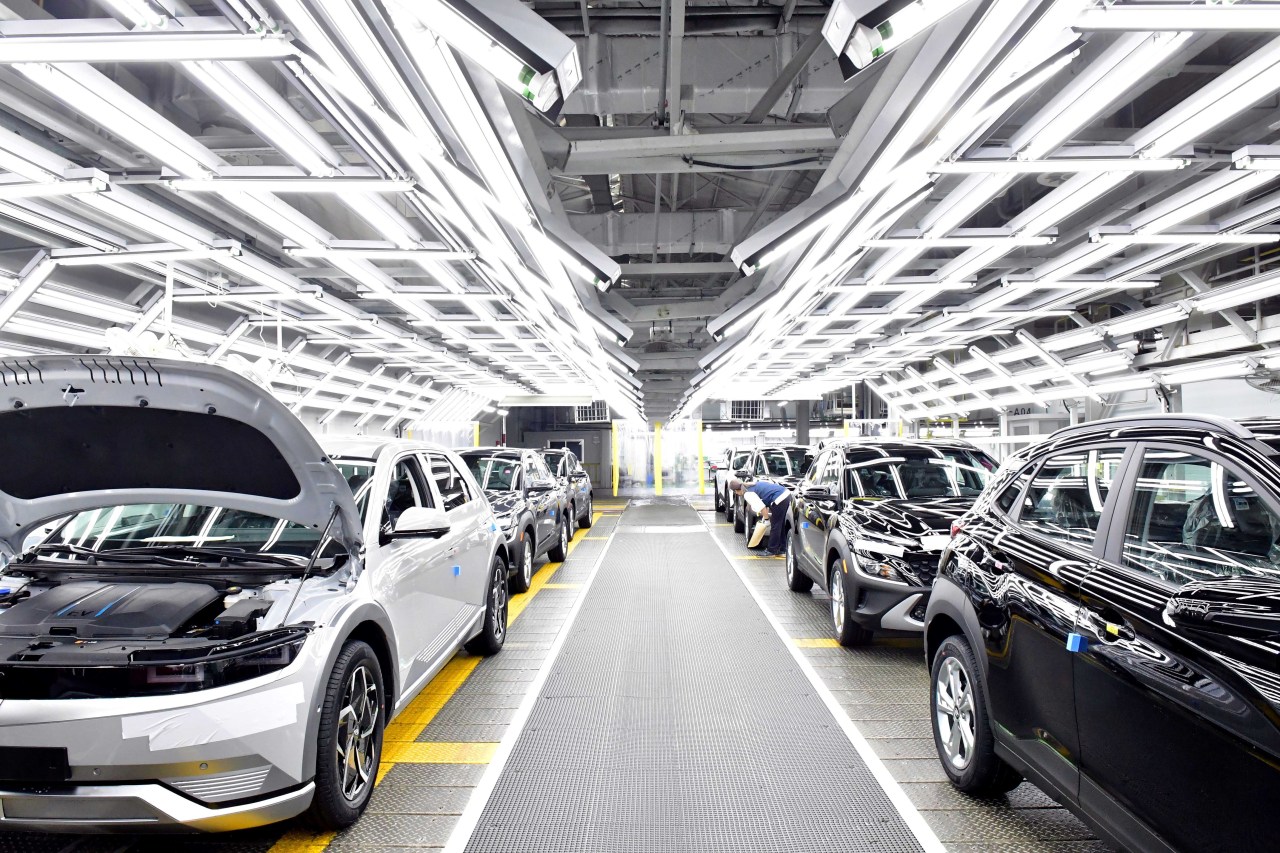 Manufacturing line for Ioniq 5 inside Hyundai Motor Group’s Ulsan production plant. (Hyundai Motor Group)
Amid looming reports that Hyundai Motor is set to announce a $7 billion investment in US, the South Korean carmaker unveiled a whopping 21 trillion-won ($16 billion) plan on Wednesday to quadruple its domestic electric vehicle production capacity by 2030.

The plan is aimed at digesting about half of its target goal of producing 3.23 million units of EVs globally, the company said. It came two days prior to US President Joe Biden’s official visit to Korea of which the company reportedly sees as perfect timing to make an announcement about its first and new EV-dedicated production in Georgia. Currently, the world's fifth-largest automaker manufactures combustion models at its Alabama and Georgia plants in the US.

Under the 21 trillion won plan, the group, which controls Hyundai, Kia and Genesis brands, is set to build a new production line to solely manufacture electricity-powered Purpose Built Vehicle (PBV) inside an existing plant in Hwaseong, Gyeonggi Province. It will produce 150,000 units of such EVs annually.

“To increase the group’s capacity in producing more EVs locally, we will promote building a new plant for PBV production, establish a system for a hybrid manufacturing line to make both EVs and combustion engine models and expand the existing EV production facilities,” the carmaker said in a statement.

Kia, a sister company to Hyundai Motor, has been highlighting its focus on PBV, a type of a self-driving future mobility that can be modified for certain purposes like last-mile delivery, car-hailing services or even as a moving business meeting room. 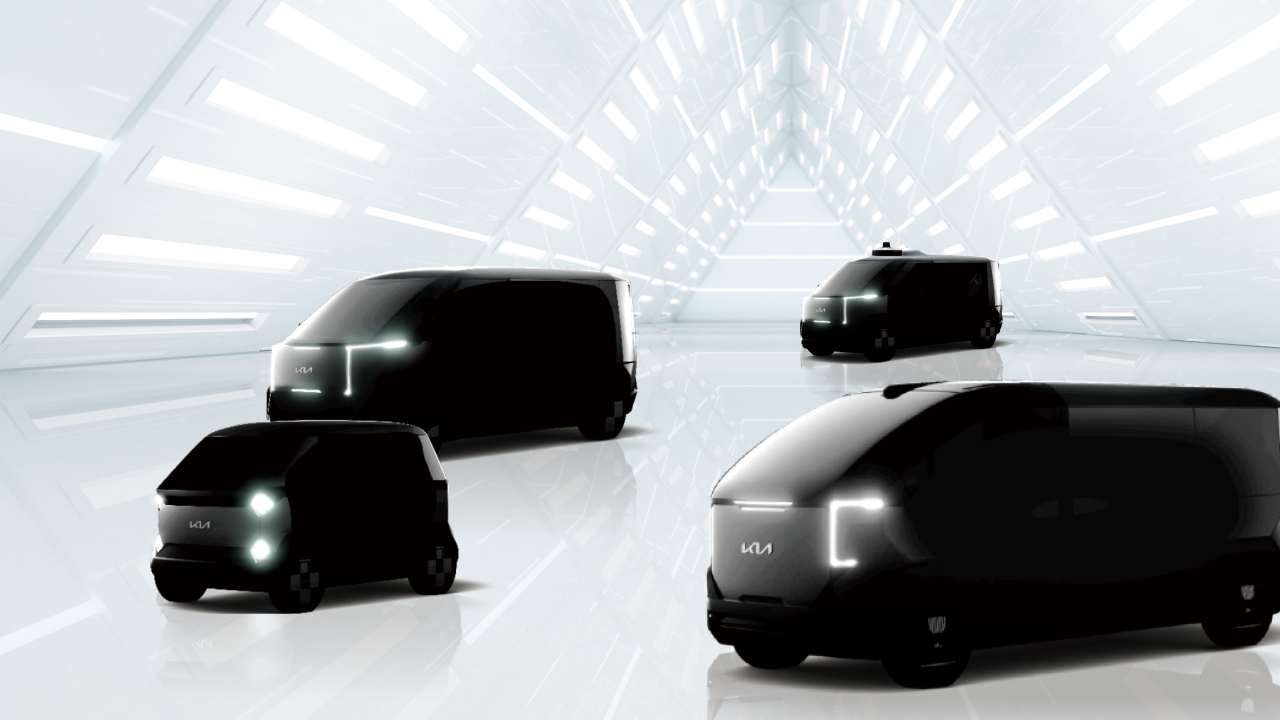 Kia’s Purpose Built Vehicle. (Kia)
As part of its PBV strategy, Kia said in March that it will produce the 1-liter Ray mini car and the Niro hybrid model for delivery or taxi purposes.

The new production lineup in Hwaseong will commercialize a mid-sized vehicle built on PBV platform called eS, instead, in 2025.

The construction of Kia’s PBV plant spanning over 20,000 square meters of land will kick off in the first half of 2023.

The plan also includes bringing in the company's digitalized and customized production system locally to innovate the EV production infrastructure here. Such system has been adopted at its future technology R&D center located in Singapore, the Hyundai Motor Group Innovation Center (HMGICS).

Local partnerships are also expected as it will seek collaborations in the categories of developing platforms for next generation EVs, expanding EV lineups, core auto parts and advanced technologies, as well as establishing related R&D facilities, the carmaker added.

The plan came amid growing resistance from unionized members who fear Hyundai’s mega investment plan in US will take away their jobs in Ulsan, a southeastern city, home to Hyundai Motor.

Hyundai’s Ulsan manufacturing complex currently has a workforce of about 32,000, working at five factories capable of producing a combined 5,800 vehicles a day.

The group’s flagship EV models like Kona and Ioniq 5 are produced there.

“When Hyundai Motor Group expands its US production, local manufacturing volume can shrink in response to that. While not every type of EV will be produced there, it is certain that fewer models won’t be made and exported from here,” said Kang Young-hoon, a senior researcher at Ulsan Development Institute.

Market insiders said the reduced production volume of EVs from the Ulsan factory is likely to cause domino effect to small and mid-sized auto parts makers in Ulsan as well.

On Tuesday, the automaker’s labor union released a statement that they are against the carmaker’s plan to build EV-dedicated plant outside Korea.

“The carmaker has breached a labor and management agreement to hold a meeting with the union regarding the expansion or the construction of new plant outside Korea, as well as conduction conversation prior to the new announcement regarding job security. Media reports on Hyundai Motor’s plan for building new factory has caused not only the concerns but anger among workers here,” the labor union said in a statement.

Late last year, Hyundai Motor’s unionized workers picked a hardliner to lead the union, a figure who led strikes against layoffs at Hyundai Motor in 1998 and promised to ask management to build a factory for EV core components inside existing Hyundai Motor factories.