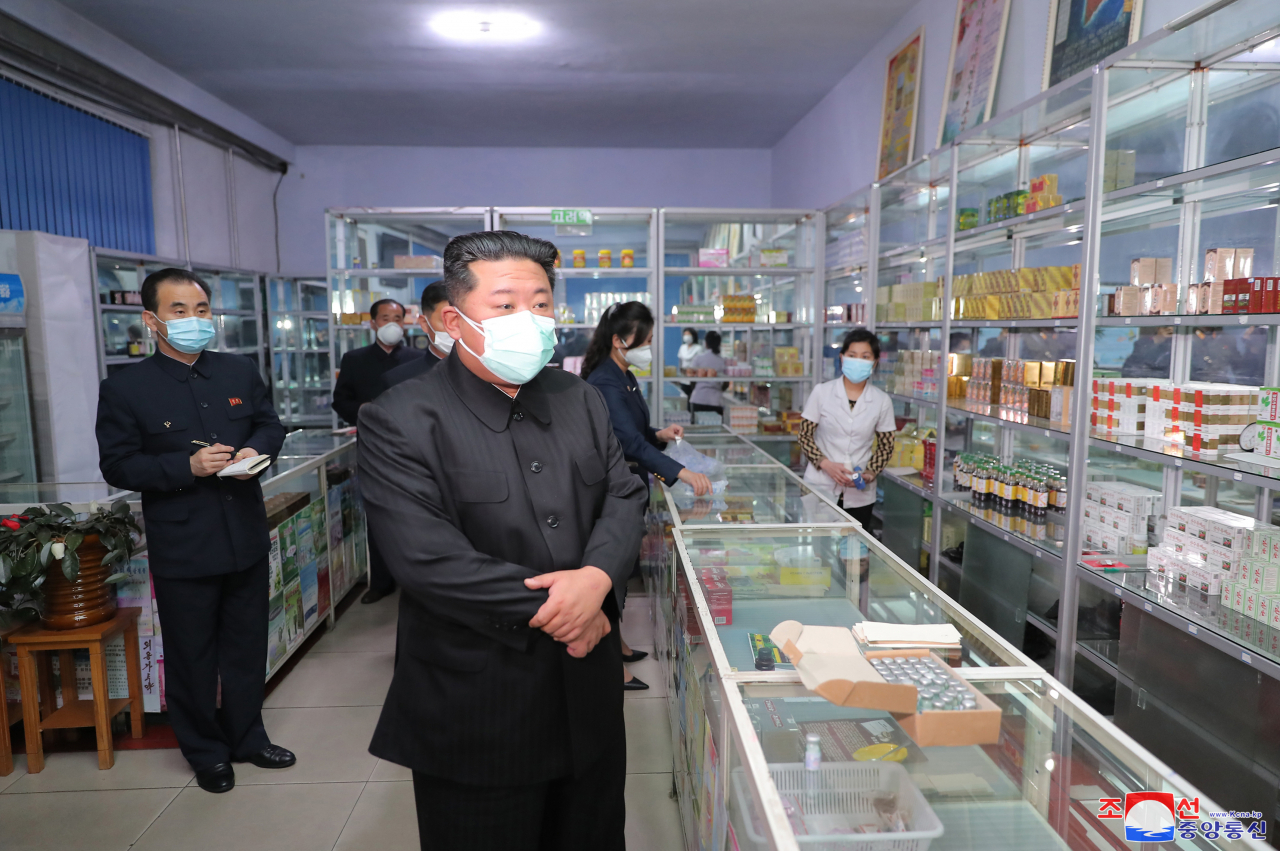 North Korean leader Kim Jong-un (front), wearing a face mask amid the COVID-19 outbreak, inspects a pharmacy in Pyongyang, in this undated photo released by the North's official Korean Central News Agency. Kim held an emergency consultative meeting of the political bureau of the Workers' Party at the headquarters of the party's Central Committee in Pyongyang on Sunday. In the meeting, Kim rebuked officials for failing to deliver medicine to its people in time and ordered the mobilization of soldiers to stabilize the supply of medicine in the capital. (KCNA)

North Korea reported six additional deaths Tuesday amid a surge in suspected COVID-19 cases, as it deployed its military to supply medicine to pharmacies in Pyongyang.

According to the information of the state emergency epidemic prevention headquarters, over 269,510 people showed symptoms of fever and six deaths were reported as of 6 p.m. Monday, raising the total number of fatalities to 56 amid the epidemic, the official Korean Central News Agency (KCNA) reported.

"On the special orders of the WPK Central Military Commission, the military medical field of the People's Army urgently deployed its powerful forces to all pharmacies in Pyongyang City and began to supply medicines under the 24-hour service system," the KCNA said. WPK refers to the North's powerful ruling Workers' Party of Korea.

Top party officials, including Choe Ryong-hae, president of the Presidium of the Supreme People's Assembly, and Premier Kim Tok-hun visited pharmacies in several districts to inspect the demand and supply of medicine.

Officials from the Cabinet and leading officials across the country helped transport the medicine to pharmacies and clinics, and took measures to "eliminate unfairness" in supplying medicine in cities and even in "far-flung villages in northern mountainous areas and areas along the demarcation line."

Last Thursday, North Korea reported its first COVID-19 case after claiming to be coronavirus-free for over two years. In response, Pyongyang declared the implementation of the "maximum emergency" virus control system. (Yonhap)