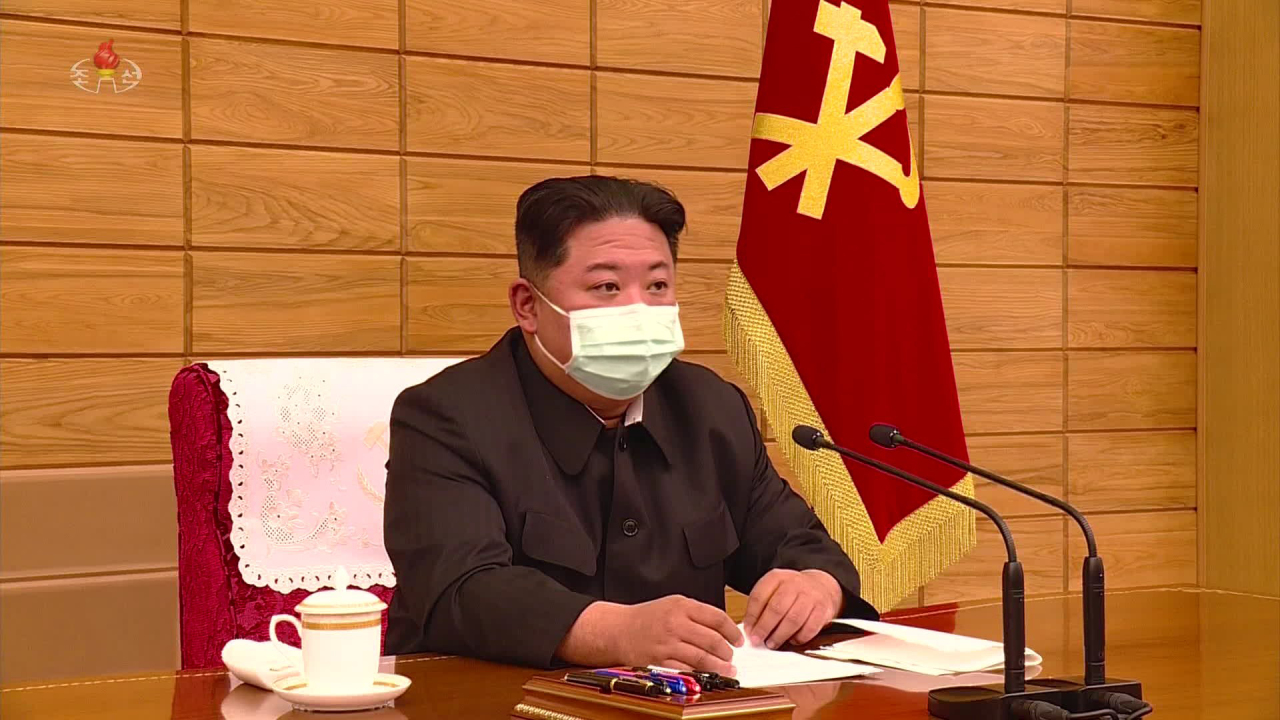 In this photo released by the Korean Central News Agency, North Korean leader Kim Jong-un is seen wearing a face mask at a politburo meeting of the ruling Workers` Party held Saturday. (Yonhap)
After holding down the fort for over two years, North Korea finally let COVID-19 slip through the cracks in its tightly sealed doors.

Just days since the first cases were announced, North Korea’s total number of related deaths rose to 42, according to the state-run Korean Central News Agency on Sunday. The count of people with fever accumulated since late April reached 820,620, which is about 3 percent of its 25 million population.

How bad could omicron get in North Korea? Here’s what experts have told The Korea Herald.

Kim said if reports were true that North Korea hasn’t been previously exposed to COVID-19, the country was now where the rest of the world was in spring 2020 -- no vaccines, no treatments and no immunity in the population.

“One of the main reasons countries experienced a lower rate of fatal omicron cases is because of the presence a fairly recent immunity among the population from prior infection or vaccination,” he said.

“North Korea reportedly has no circulation of previous strains, which means its entire population is susceptible. It has limited health care services, a high proportion of vulnerable people and zero access to key resources like vaccines and antivirals. All of these factors set the stage for potentially disastrous outcomes.”

International Vaccine Institute’s director-general Dr. Jerome Kim warned that omicron, which spreads at a rate of speed between that of chicken pox and measles, could hit North Korea’s immunologically naive populations harder.

Among older South Koreans aged 60 and above, omicron had a mortality rate of 5 percent.

“In North Korea, everyone -- the elderly, adults, and children -- would be at greater risk of hospitalizations and deaths due to a high prevalence of malnutrition, based on reports of food shortages from earlier this year,” said the International Vaccine Institute chief.

This would be on top of the vulnerabilities that were already present before the pandemic hit. According to the National Cancer Center-affiliated Peace Medical Center’s recent survey of North Korean defectors, 41 percent said they weren’t able to see the doctor when they were sick while in North Korea. More than 50 percent said they had never received a vaccine.

While a lock down remains the only strategy available to North Korea, science so far suggests the approach is at best shortsighted.

“After infecting a significant part of the population, the virus may be less of a threat for a period of time. Then it will likely flare up again,” said Kim of the International Vaccine Institute.

Immunity from natural infection with omicron is not that durable, particularly against different variants, he explained. Whatever immunity from the current BA.2 outbreak likely would not stop BA.2.12.1, BA.5 or a new variant from posing threats in the future.

“The virus may also end up being more slowly transmitted out of sight, in the sense that North Korea doesn’t have good testing,” he added.

“The Chinese system worked because they have the resources to do mass testing and the economic strength to ensure lockdowns. China also has vaccines,” he said. “Without the resources and capabilities to test, treat and vaccinate, what are the likely outcomes (of lockdowns)? I think we know what will happen.”

Dr. Paik Soon-young of Catholic University of Korea agreed that in the absence of medical interventions, North Korea would stand slim chances of weathering through the omicron outbreak.

“The pursuit of zero COVID-19, its sustainability aside, did not work for low-vaccinated Hong Kong and non-mRNA-vaccinated China once omicron caught up with them,” he said.

“Given the North’s conditions, an omicron outbreak there may explode into a magnitude that dashes any dreams of sticking to its old ways of border shutdowns and lockdowns.”

North Korea’s ability to pull off China-style mass lockdowns is doubtful, given their chronic struggle with starvation made worse by the pandemic, he said. After Shanghai’s extended lockdown, residents there had reported they had run out of food.

“The goal for North Korea at this stage should be minimizing deaths.”


The best way out

Dr. Cha Ji-ho, a global health professor at Korea Advanced Institute of Science and Technology, laid down three ways the COVID-19 outbreak could go down in North Korea.

“North’s ability to execute a strict, population-wide social distancing could prove successful in quelling the outbreak for the time being. But that would come at the cost of worsening secondary health and food crises,” said Cha, who has been following the developments in North Korea throughout the pandemic with the World Health Organization and the South Korean Ministry of Unification.

“If North Korea decides to accept outside help, and essential medical supplies like vaccines, medications and respirators get there in time and in enough quantities, cases could subside in a way that minimizes damage on lives and livelihoods.”

Possibly the worst scenario would be lockdowns failing to do the trick while at the same time international aid hasn’t been secured, he said. “In which case, large-scale deaths would be unavoidable.”

Then again, North Korea has “its own brand of resilience,” he said.

Sparse population and restricted travel within borders make physical distancing convenient. Disciplining the public about health precautions would not be a problem due to lack of competing sources of information. North Korea has 3.7 doctors per 1,000 people, according to the WHO data from 2017.

“These unique circumstances could allow the country stall the spread and buy time until life-saving medical resources become available, which would be the best way out of the crisis,” Cha said.

Kim of the International Vaccine Institute said politics and accountability aside, there are not only humanitarian but biological concerns for the world to act in face of a North Korean outbreak.

“There are strategic concerns that I am not qualified to assess, but from a public health perspective, if the situation is this dire, we must act and offer help on humanitarian grounds.”

There were also risks new, threatening variants could pop up from the region, he said.

“We know what happens when the virus is rapidly spreading through a naive population. Look at the rise of beta, omicron in South Africa, delta in India, gamma in Brazil.”

COVID-19 is “no doubt a key agenda” in North Korean politics, according to Park Won-gon, a professor of North Korean studies at Ewha Womans University.

The display of early-hour politburo meetings and the sheer volume of COVID-19 reports in Rodong Simun, the Workers’ Party organ, attested to the extent to which the public health emergency was taken seriously.

“North Korea has responded to COVID-19 with what I would say is almost a neurosis. That’s because it was viewed as a potential challenge to regime survival,” he said.

“Most North Korea collapse scenarios rule out the possibility of a popular rebellion amounting to a threat to the regime. But a pandemic combined with prolonged economic hardships has been discussed as a possible scenario under which such unrest could be instigated.”

COVID-19 probably reached North Korea long before this week, but the belated admission indicated that outbreak has grown to a size that could no longer be hidden, he said.

Park said he didn’t think North Korea was seeking international help, at least not so far.

“North Korean authorities identified the strain of virus circulating there as ‘stealth omicron.’ They’re aware the existing vaccines won’t work as well against what they have,” he said. “Whether North Korea continues to engage in missile-firing from now on could signal a message as to if help is wanted.”

North Korea-trained physician Dr. Choi Jung-hun, who worked at the North’s state epidemic control division before defecting to the South in 2012, said he sees “nothing changing with North Korea, even with an omicron ‘explosion.’”

He said omicron would be “just one of many public health hiccups” that people of North Korea routinely put up with. “I don’t think outsiders truly understand the level of tolerance North Koreans have for pain.”

Choi said the latest announcements would likely only serve as a justification to keep up with the measures taken by North Korea to control the pandemic, both internally and internationally.

South Korea’s newly inaugurated president Yoon Suk-yeol has offered to send medical supplies, including vaccines, to North Korea. Millions of COVID-19 shots in South Korea are at risk of being discarded, with most of the population having been doubly, if not triply, vaccinated.

These excess vaccines, arguably one of the most precious commodities at the moment, could go to its neighbor except it is unclear if North Korea would be willing to accept them. Over the ongoing pandemic North Korea has repeatedly refused vaccines from COVAX, an international vaccine-sharing scheme.

Cha of Korea Advanced Institute of Science and Technology said there would be little incentives for North Korea to accept assistance unless it came in quantities that were “certain to turn the situation around.”

“If that isn’t the case then North Korea wouldn’t want to risk the possibility of external political influence.”

People Power Party Rep. Tae Young-ho, once North Korea’s deputy ambassador to the UK,  pointed out in a Facebook post Friday that a support to North Korea would have to come as a full package covering not only vaccines but the logistics and cold chain technology necessary to deliver them.

“It may have been holding out to be offered shipments of Pfizer or Moderna to cover three shots for everyone rather than agreeing to shipments of different vaccines in stages,” he said.

“Pyongyang was probably waiting for global cases to abate before resuming international contact, but now its fortress approach has been broken,” he said. “Under the current circumstances, North Korean authorities should recognize there is no longer any time to waste.”

Easley said North Korea is “determined to receive assistance on its own terms, without showing desperation and weakness.” Donor countries and international organizations “may need to find creative arrangements that provide some face for the Kim regime.”

He went on, “But ultimately it is the North Korean government that must ask for, and cooperate to receive, international assistance that is urgently needed for its people.”