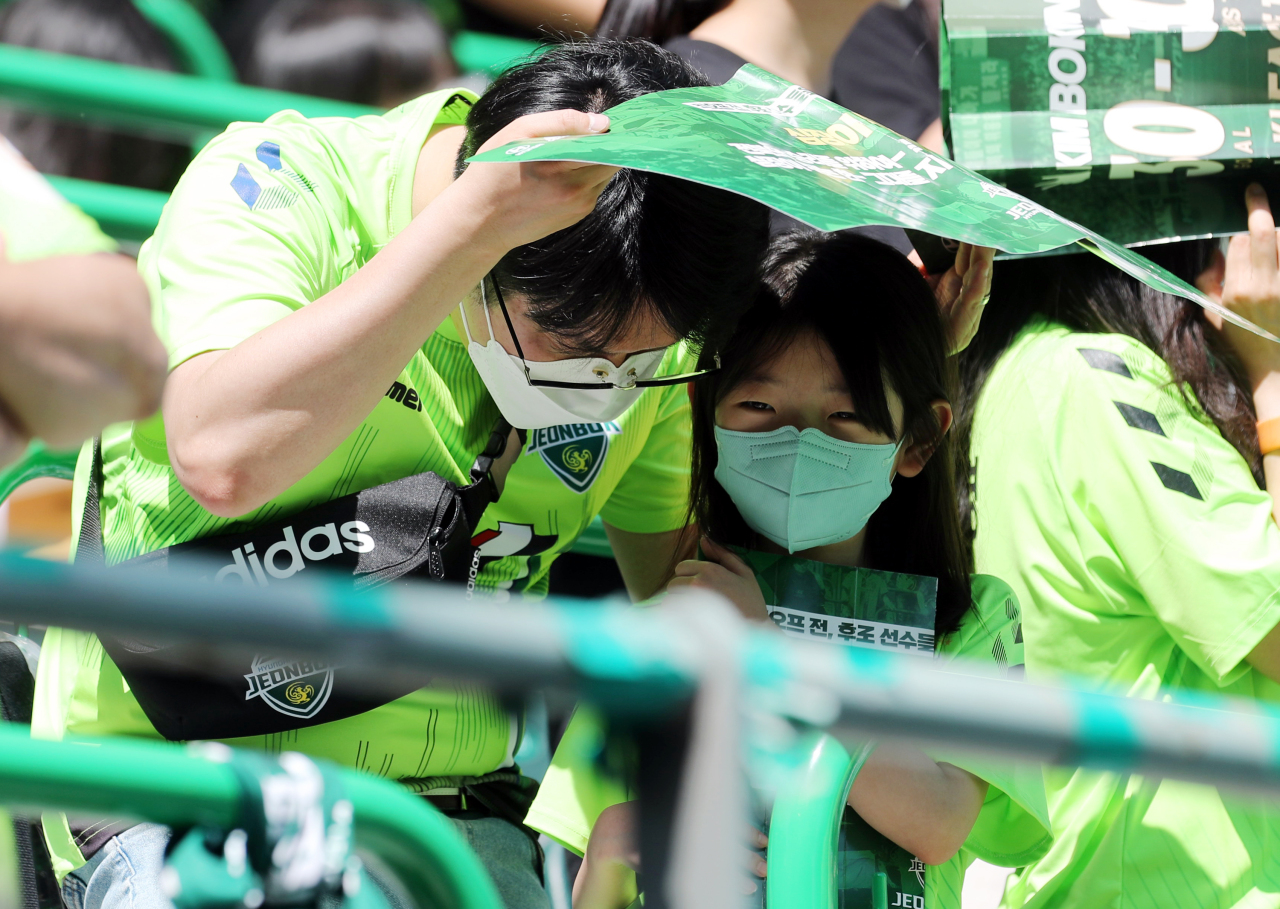 A father and his daughter attend a K League professional football game between Jeonbuk Hyundai Motors and FC Seoul held in Jeonju, North Jeolla Province, May 5.

A married couple and their children is what usually pops up in most people’s heads when hearing the word “family,” at least until now. But recent research indicates that this picture may be changing for a growing number of the local population, especially for youngsters.

Last week, a survey by a local think tank revealed that 52.4 percent of South Koreans in their 20s said they will not have children when they get married.

The study, conducted by the Korea Development Institute, is only one of the reminders that the perception of marriage and “the ideal family” is changing among the country’s young population.

Not only are more young people factoring kids out of their equations, more are saying they will not get married at all.

According to the Ministry of Gender Equality and Family’s study on South Korean families, 46.6 percent of the 20-somethings surveyed said they are willing to live with someone but never get married, jumping from 25.5 percent in 2015. The practice of unmarried couples living together had been frowned upon in the past. 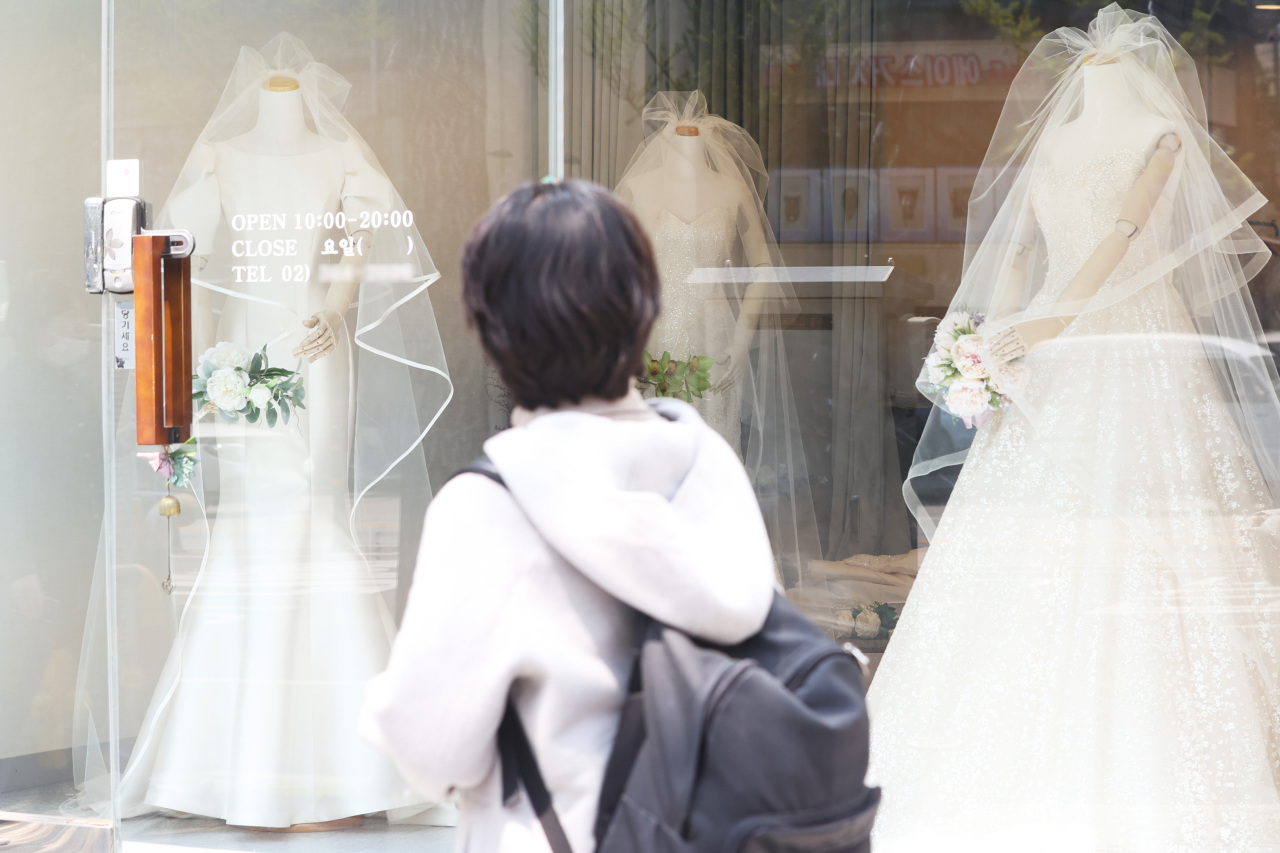 The issue of not having children is not confined to youngsters refusing to get tied down. Statistics Korea’s December report showed that 8.8 percent of married women in the country as of 2020 do not have children, up from the 4.4 percent recorded in 2010. Of married women with no kids, 43.3 percent agreed with the statement “Marriage with no children is all right.”

Reasons for not having kids included “wanting to enjoy life with just their spouses” at 24.2 percent and “wanting to be affluent financially” at 20 percent. Respondents also said they didn’t want kids because Korea was “a society in which a child cannot grow happily” at 16.3 percent. Sure enough, South Korea is not a cheap place to raise children, evidenced by a Jefferies Financial Group report showing that it is has the highest ratio of child-rearing costs to per-capita gross domestic product in the world.

Another report from Statistics Korea in February showed that the country’s total fertility rate -- the average number of children that a woman is perceived to have over her life under normal circumstances -- dropped to an all-time low of 0.81, falling woefully short of the former Moon Jae-in administration’s initial goal of 1.4 upon its launch.

It appears that the new administration sees the low birth rate as inevitable.
Earlier this month, President Yoon Suk-yeol’s transition team said the country needs a new strategy concerning the country’s population, focusing on ways to minimize the impact of a population decline, rather than trying to reverse the phenomenon.

“Even if the total fertility rate rebounded, it would still be difficult to recover the country’s population,” said professor Cho Young-tae of Seoul National University who is also on the transition team’s population taskforce. “The Yoon administration’s population strategy will be to predict changes and preemptively adjust the system,” Cho said during a press conference on May 1.

The year 2020 marked the first time in history where more men in their 30s -- 50.8 percent -- were single than married. As with childless couples, the financial consideration is among the biggest reasons.

A 34-year-old office worker stationed in Incheon surnamed Lee said he is postponing marriage until after acquiring some kind of financial stability. “I wouldn’t rule out marriage as an option, but I don’t want to rush into it without sufficient funding,” he said.

Not marrying among 30-somethings is a graver issue than it appears. Statistically speaking, they are the age group most likely to get married in South Korea. Government data shows that the average age of first marriages for men in 2021 was 33.4 and 31.1 for women.

While not quite as sizeable an increase as their male counterparts, the non-married ratio of women in their 30s also increased to 33.6 percent, from 28.1 percent five years prior.

Reasons for this vary, but some women said they find “conventional” perceptions of women’s roles in a marriage to be unfair. Recent data from the Gender Equality Ministry showed that married women devote 1.4 hours a day taking care of their children, compared to 0.7 by men.

“If I were ever to get married, it would be at least after I’m 30. I want to date and enjoy life before I get tied down,” said a 23-year-old woman who gave her name as Su-hyun.

Overall, more people are choosing to pass on marriage and live alone, compared to the past. The Gender Equality Ministry found a significant increase in single-person households from 2015 to 2020, increasing from 21.3 percent to 30.4 percent.

More importantly, it showed that the overwhelming majority -- 72.1 percent -- said they intend to continue living alone, implying that their solitary status is by choice, not situation.

Far fewer people have been joined in holy matrimony compared to the past, with only 193,000 marriages taking place in 2021. This was the lowest figure in history since the state had started keeping tally in 1970.

Whether the aforementioned phenomenon is temporary -- perhaps induced by financial hardship from the pandemic or the product of supposedly poor policies -- or represents a change in the tide remains to be seen. But evidence suggests that the question of what a perfect “family” is seems less clear than ever before.