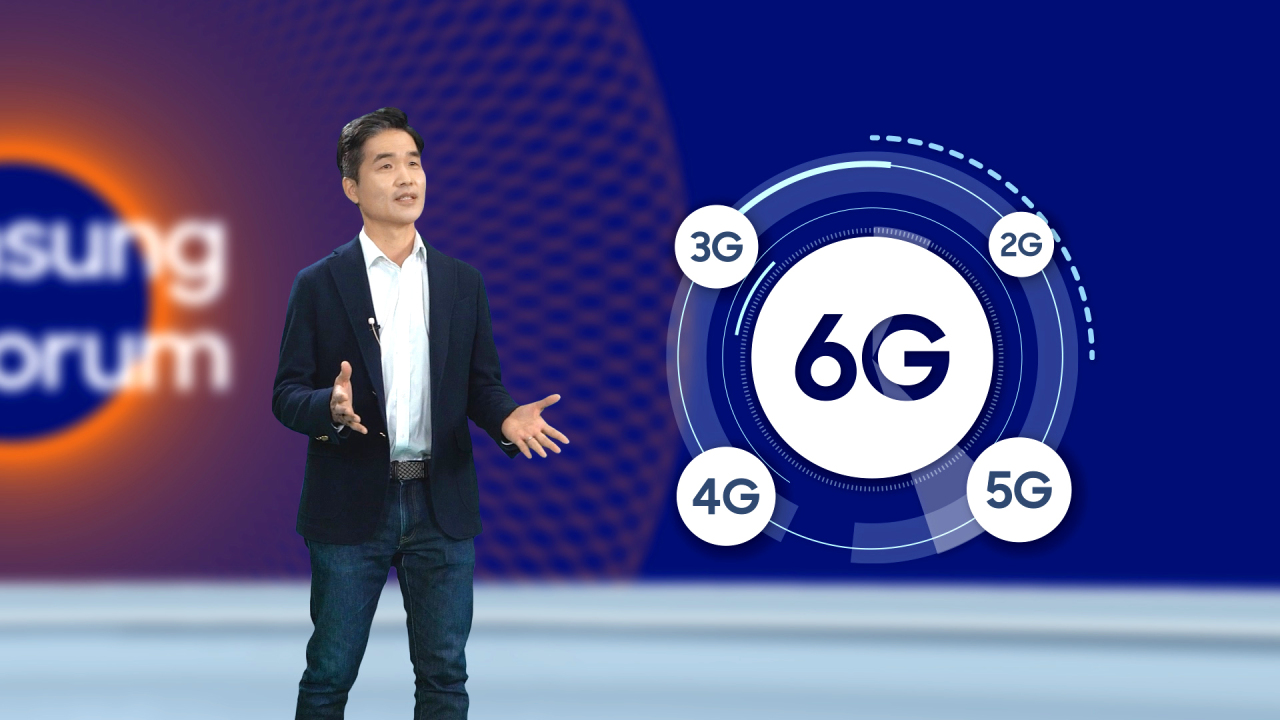 Sebastian Seung, president and head of Samsung Research, delivers a speech at Samsung 6G Forum Friday. (Samsung Electronics)
While 5G penetration is still largely underway worldwide, it does not mean progress to build a faster wireless network globally has peaked.

Given that it takes about a decade to enable the next generation wireless network, and the world is seeing more applications that require massive data processing, works to roll out the next generational network technology should start now, experts also said.

Sebastian Seung, president and head of Samsung Research, said in a speech that 6G is key to advancing the level of hyperconnectivity from that of 5G, enabling a more immersive extended reality, holograms and digital replicas. Samsung Research is an in-house think tank of South Korea‘s largest conglomerate.

This stems from the explosive increase in connected machines that drive up the use of network bandwidth and the need to manage complexity using artificial intelligence and machine learning.

Seung added that now is the right time to start preparing for 6G, echoing suggestions in its white papers, which suggested that 6G is 50 times faster than 5G and has one tenth the latency of 5G.

“Shaping 6G will require many years as we’ve seen in the previous generations,” Seung said.

Experts noted the gap between 5G and 6G in terms of capacity.

Jeffrey Andrews, professor at the University of Texas at Austin, told the audience about “situational awareness” in the 6G network -- aside from huge data capacity and mass connectivity -- will redefine how driverless cars and ubiquitous robots operate.

The next-generational network will allow autonomous moving objects to sense things and know about things outside of their own field of vision, according to Andrews.

“(An autonomous car or robot) needs to know more than it can sense itself,” Andrews said.

“Base stations in 6G will be dense and tower-mounted, and this is the perfect place to put lots of sensors such as radars, lidars, visual sensors and other forms of sensing, in order to build an unprecedented network awareness.”

Another speaker at the event who echoed this view was Tarik Taleb, a professor at the University of Oulu in Finland. Although the 5G network brought in the concept of cloud computing and software engineering to the telecommunications world, there is still a technological barrier it faced with the 5G standard, Taleb claimed.

“When it comes to whether the system is truly cloud native, whether there is extensibility of services and whether the network is truly open, in my opinion, the 5G core design nowadays is not meeting these requirements,” Taleb said.

The question, however, is about whether the world would be able to control the cost of a 6G network, given the expensive technology sets required.

“We can’t just deploy all these different networks, and certainly the base stations will need to be very dense,” Andrews said.

“So to make this cost-effective there has to be unprecedented amount of sharing and cooperation and reuse of infrastructure among different operators and different applications,” he said.

The event comes amid calls for preemptive collaboration efforts among different network vendors and operators to lay the basis for users’ immersive experience.

The market size of the global 6G network is expected to hit $40.99 billion by 2032, as the new network standard is projected to be commercialized, showed an estimate by Brandessence Market Research.

South Korea is preparing to gain a competitive edge in 6G technology. Korea had filed 4.2 percent of total 6G patents globally, ranking fourth among nations filing such patents following China, the US and Japan, according to a study jointly conducted by research firm Cyber Creative Institute and Japan-based news organization Nikkei Asia in August 2021.

The Yoon Suk-yeol administration is looking to nurture at least 48 key technologies related to the 6G standard by 2026, its policy roadmap has revealed. This follows a 220 billion won ($171.5 million) investment pledge in the five-year plan by the previous Moon Jae-in administration unveiled in 2021.

Samsung has embarked on research for 6G-related technology internally since 2019, aiming for a global 6G technology standardization. Also, Samsung Research’s Principal Engineer Choi Hyung-jin has been leading the 6G Vision Group at the International Telecommunication Union-Radiocommunication since last year.

As for 5G penetration, the tech giant has been supplying 5G network equipment to countries including Korea, the US, Canada, Japan, Australia and New Zealand.