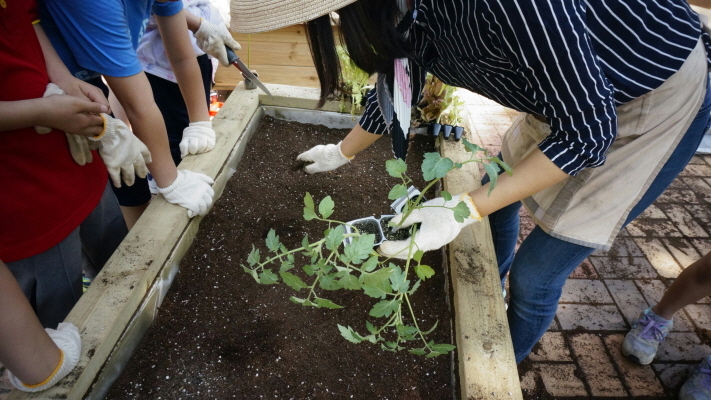 Participants of care farming program for gardening therapy at Dream Tteul Healing Farm are seen enjoying the activities. (Dream Tteul Healing Farm)
For Kim Yoo-jun, a 31-year-old firefighter, farming is a newfound hobby -- not necessarily to put fresh vegetables on his table, but to regain strength to continue his mission of saving lives.

Looking back at the last three years, Kim realized that he was under a lot of stress at his high-risk job. He realized that he desperately needed to do something other than taking pills or counseling to manage his stress.

“I run my own little farm near my mother’s house. It’s as small as 2 square meters of land, but growing vegetables like lettuce and Korean perilla makes me feel like I’m being healed. It’s funny, right?” Kim said, adding that he plans to visit floral markets and go tree hunting to make his small farm more lively.

Kim is one of a growing number of people in South Korea who have begun care farming as an alternative form of treatment or medicine.

Behind the growing care farming population is the government, as it acknowledged the power of gardening therapy for Koreans going through mental distress and discontent about the quality of their lives.

According to the Korea Development Institute’s research last year, Koreans were the least happy people among OECD nations.

In the early 1990s, the RDA first introduced gardening therapy and expanded the concept to include planting and farming in 2013. In 2017, a total of 28 farms across the country were designated by the RDA as test beds for a Korean version of care farming. As of the end of last year, the agency’s data showed that there were 234 care farms in the country, but the number is expected to be larger when including privately-run care farms with their own therapy programs.

“The health benefits of care farms are great for people who have a variety of ailments. For example, some people who have lost functionality or who have become dependent on others are introduced to care farms. These people are often able to do the manual labor necessary to make the garden successful,” said Chung Myung-il, an official from the agency’s urban farming team.

Care farms were first introduced in 1950 among European countries with the purpose of promoting people’s welfare.

“In the case of European countries, people can stay for few days at farms for farming or gardening therapy. Taking care of plants or other living things really boosts one’s self-esteem and sense of responsibility, as well as mitigating aggressive character traits. Children and young students can increase mental stability and a feeling of bonding, while adults can relieve their stress,” said Han Tae-ho, a professor of horticulture at Jeonnam University.

Research conducted by the RDA has also shown that senior citizens with mild dementia symptoms who participated in a 10-week program of care farming therapy for two hours a week saw their objective cognitive functions increase by 19.4 percent.

Experts say that the therapeutic aspects of care farming are important.
Song Mi-na runs a private care farm in Wanju, North Jeolla Province, targeting children and seniors with five programs including farming, cropping and playing in the forest. Her care farm opens up people’s minds to express their feelings and let negative feelings go away, Song says.

“Using resources at our farm and garden -- such as flowers, vegetables, animals, forest, insects and food -- we have prepared programs to help participants alleviate their depression and enhance emotional stability,” said Song.

Participants come from various walks of life. They include young students, people with developmental disabilities and seniors who want to prevent dementia. There are also elderly couples, friends and co-workers who participate together.

People who have been through life-changing events often turn to this type of farming to interact with others who have had similar experiences, according to Song. 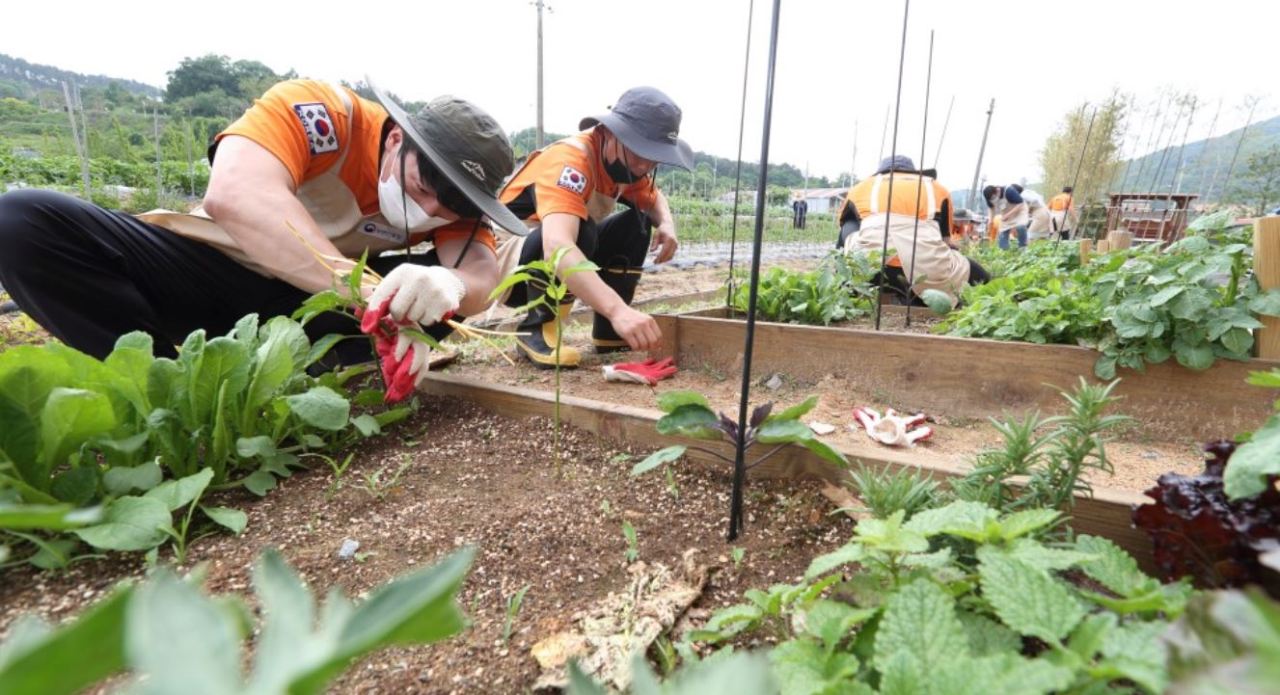 Firefighting officers participate in a care farming program run by Rural Development Adminstration. (Rural Development Adminstration)
In a similar context, the RDA formed a partnership in 2020 with the National Fire Agency to offer care farming programs for firefighters, starting with officers stationed in the Daejeon area. A group of 30 officers gardened at a farm by planting herbs and vegetables and making organic air fresheners using flowers.

After analyzing the brainwaves of the participating officers, their cortisol concentration levels reduced by 23 percent compared to before the program. Cortisol affects several aspects of your body and mainly helps regulate your body’s response to stress.

“I clearly remember one of the program participants at the care farm was really lethargic in the beginning, but after touching soil, taking care of plants and sharing cropped vegetables with her neighbors, she really changed into an outgoing, relation-oriented person,” Song said.