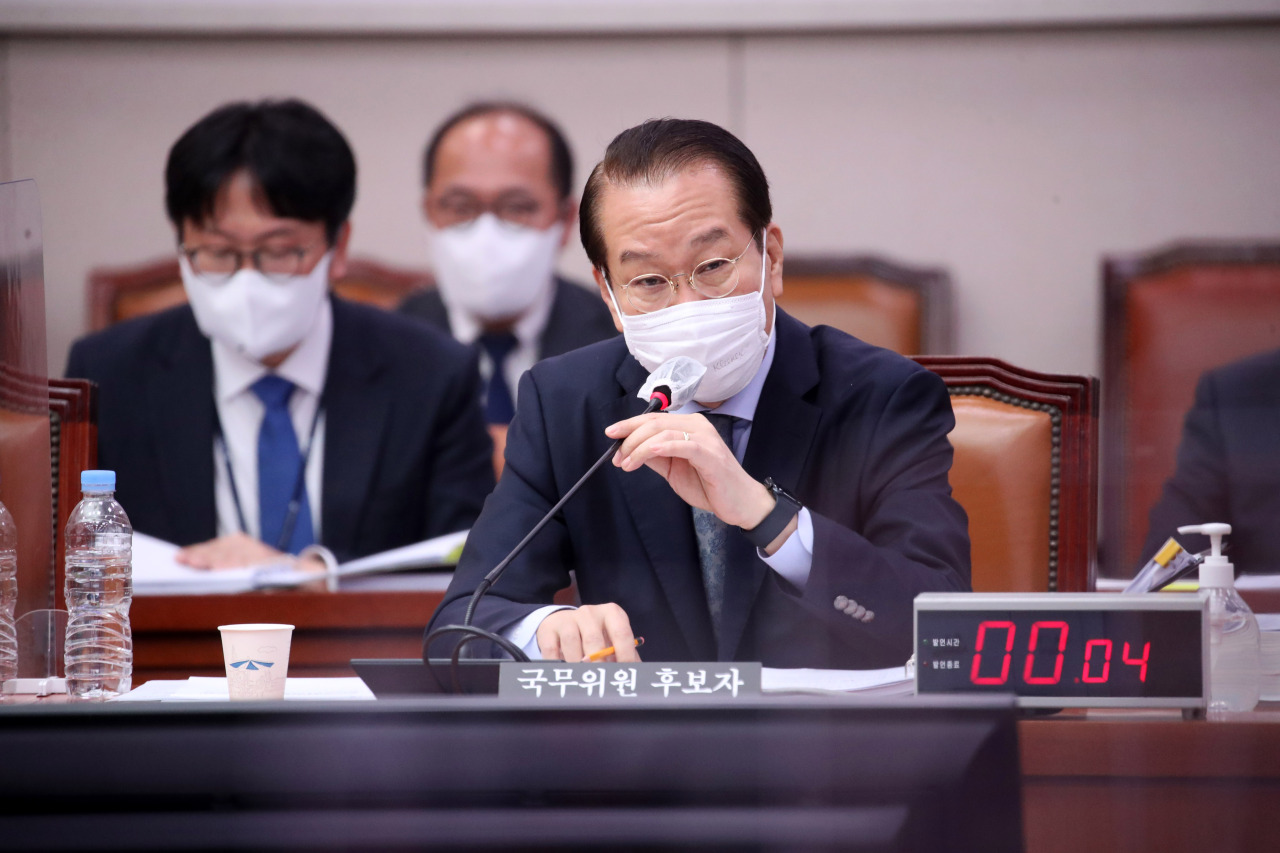 Unification Minister nominee Kwon Young-se speaks during his parliamentary confirmation hearing at the National Assembly in Seoul on Thursday. (Yonhap)
Unification Minister nominee Kwon Young-se said he would consider visiting Pyongyang as a special envoy when he steps into office, during a parliamentary confirmation hearing on Thursday.

“I will consider the situation with North Korea and consult with our foreign policy and national defense team and openly consider the possibility,” he said in response to a question from Rep. Lee Tae-kyu of the ruling People Power Party.

Kwon is a four-term lawmaker who is considered a close associate of President Yoon Suk-yeol.

Kwon also said that a government’s policy to deal with North Korean issues should be understood as “a relay race,” and that all agreements the former liberal Moon Jae-in administration has made with North Korea would stay valid.

“In the transition periods, there have always been criticisms against former administrations. But I believe it is not appropriate to completely ignore (the works) of former governments and go in reverse, just because of the criticisms,” Kwon said.

“The idea to ‘reverse everything Moon Jae-in did’ would not only cause confusion in our North Korean policies and the North, but may also give way for Pyongyang to exploit the situation.”

The nominee said he evaluates the past agreements forged between former President Moon Jae-in and the North Korean leader Kim Jong-un as “positive.”

The two agreements, the Panmunjom Declaration inked between Moon and Kim on April 27, 2018, and Pyongyang Joint Declaration on Sept. 19 in the same year will remain valid under the Yoon Suk-yeol administration, Kwon added.

In response to North Korea’s official confirmation of first COVID-19 outbreak on Thursday, the nominee said the South Korean government is willing to provide relief aid to the reclusive state.

Kwon said it is “morally inappropriate to take advantage of Pyongyang’s difficult situation” to initiate talks with the regime, but that the government would be willing to take actions to help the North.

“The Unification Ministry already has its budget planned for related support (to North Korea). I will review the ways to cooperate,” the nominee said.

When asked about his first move when he is inaugurated, Kwon said he would want to start talks on any topic, as Pyongyang continues to reject almost all of Seoul’s proposals.

“North Korea is rejecting almost all talks on humanitarian aid and on organizing reunions for separated families,” Kwon said.

“As you know, cases of omicron infections were found in North Korea, but they even (rejected the offer of) vaccines.”

In his opening speech, Kwon said he would handle North Korea’s missile provocations with strict and stern measures, but would also open the door for dialogue and negotiation.