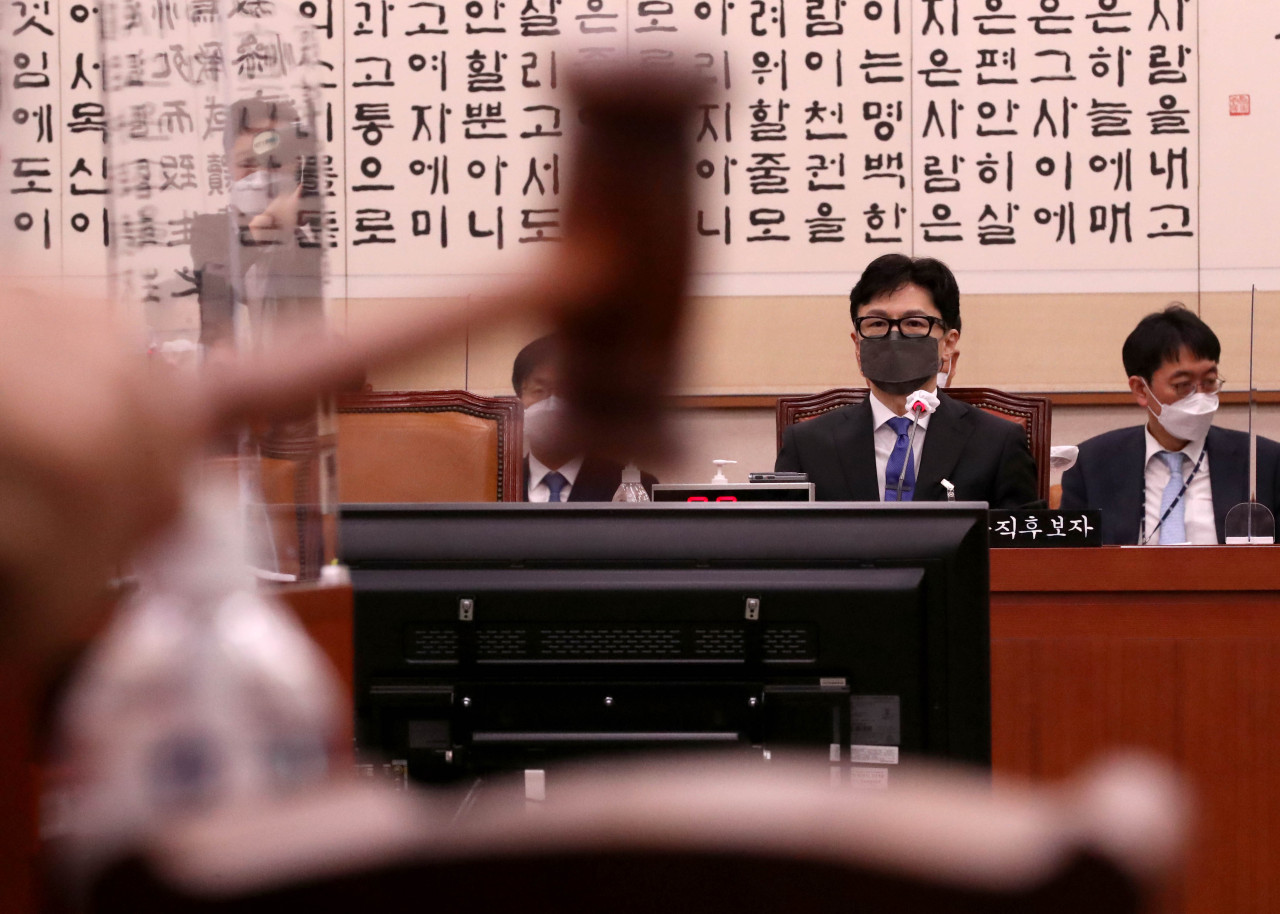 Justice Minister nominee Han Dong-hoon during a National Assembly confirmation hearing on Monday. (Yonhap)
How many high school students have their papers published in academic journals?

The question has prompted headlines in the South Korean media in recent days, following a political scandal.

At the center of the controversy is the daughter of Justice Minister nominee Han Dong-hoon who published five academic papers and four e-books within the space of two months as a high school student.

Reminiscent of a case years ago involving the daughter of former Justice Minister Cho Kuk and the family’s efforts to fill her resume with impressive extracurricular activities for college admission, the latest case is provoking soul-searching in a country obsessed with getting a college diploma.

What to make of children of influential parents racking up extracurricular credentials seemingly unattainable for ordinary students?

“For high school students to so easily publish their papers in international journals like what has been seen in recent years used to be unfathomable,” economics professor Lee Joon-koo of Seoul National University posted on his Facebook on Friday. The post was titled “Where have all the geniuses gone?” in which he called the students “fake geniuses.”

“As for me, I did not finish a single decent paper throughout my entire college (student) years.”

Criminality has been found only in the case of Cho’s daughter. But questions remain over to what extent the achievements of Han’s daughter have been thanks to help from her parents rather than her own doing.

Professor Lee, who is the author of “Introduction to Economics” and has taught at many local universities, said it was in the early 2000s -- after the country’s college entrance examination system was revised -- that high schoolers who write academic papers while in high school suddenly started to emerge.

Questioning why local academia has not made major advancements in the past 20 years and why he has not met anyone exceptionally smart at his university over the years, he branded these highly qualified students “fake geniuses,” a product of the country’s ill-advised education system and parents’ obsession with elite schools.

Research led by Kang Tae-young, the head of media company Underscore, and Kang Dong-hyun, a Ph.D. student in the University of Chicago‘s Department of Sociology, seems to support his observation.

According to their analysis, between 2001 and 2021, a total of 558 papers were written or co-written by 980 high school students. At least 70 percent of those who published an academic paper while in high school have not done any further research work after graduating from high school.

It also found that many of the papers were in computer engineering and medicine, subjects not offered as part of regular secondary education.

South Korea took a major shift in direction to reduce the college entrance system’s reliance on one standardized written exam administered by the state educational authorities in 2001. This resulted in a greater emphasis on an applicant’s resume of extracurricular activities.

It was against this backdrop that the business of college admission consulting came to thrive, offering programs designed to help clients get into prestigious universities.

Those with an eye on universities in the United States or elsewhere sought the help of former admissions officers and professional consultants specialized in foreign schools.

These businesses, some of whom charge hefty sums, have faced criticism that they are designed for the rich to pass on their education and disrupt efforts to achieve equal footing in education. Education authorities have introduced measures in the past to crack down on consulting firms offering ghost writing services.

Some have drawn comparisons between this and the case involving the daughter of former Justice Minister Cho.

In April, Pusan National University finalized its decision to cancel the admission of Cho’s daughter into its medical school because of forged documents used in her application.

One of her first credentials to come into question was a pathology research paper published in an international medical journal. The paper listed Cho’s daughter as the first author despite the study needing ethical review board approval and her being a high school student at the time. The paper was later retracted after the corresponding author admitted the study did not have ethical approval and the co-authors did not make relevant contributions to the study.

In a statement on Sunday, groups including Professors for Democracy, called on Han’s nomination as justice minister to be withdrawn over the issues regarding his daughter.

It said that some of the papers written by Han’s daughter were published in “predatory journals.” ABC Research Alert and Asian Journal of Humanity, Art and Literature -- two of journals in which Han’s daughter have published papers -- have been flagged by Cabell’s Blacklist, a list of deceptive or predatory journals, according to reporting by local media outlet Newstapa.

By publishing in predatory journals, Han’s family has contributed to disrupting the scholarly publishing ecosystem, the groups said in a joint statement.

“For years, we saw many high-ranking nominees for public office forced out of their position over unethical research practices or stay in office despite controversies,” they said.

A 2019 TV series “Sky Castle” touched upon South Korea’s education craze. The award-winning hit show laid bare the dark side of the country’s obsession with elite schools, featuring wealthy tiger moms who are the wives of doctors and an ex-politician. 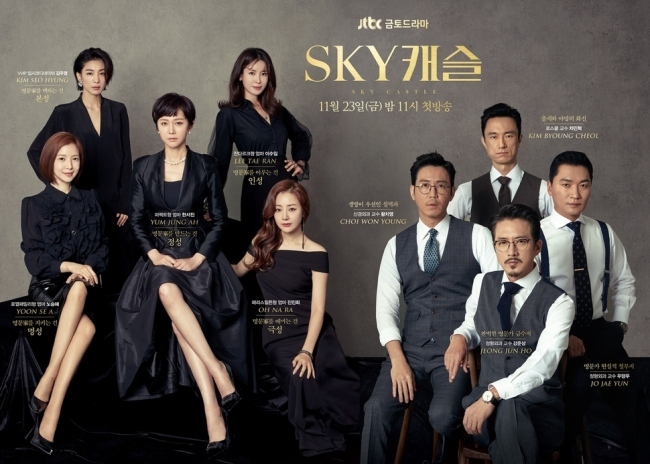 A Poster for Sky Castle (JTBC)
Han Seo-jin, played by actress Yum Jung-ah, is a woman desperate for her daughter to be accepted into Seoul National University’s School of Medicine in hopes of winning the approval of her own mother-in-law. In doing so, Han hires an elite university admissions coordinator whose cut-throat approach to education later backfires.

In the show, another family learns that their daughter lied about attending Harvard University for a year and that she had faked admission to the Ivy League school. She confessed that she lied because of pressure from her father.

The show entered the political debate over academic credentials this week as a pop culture reference.

In a radio interview, Rep. Jang Kyung-tae of the ruling Democratic Party of Korea argued that if former Justice Minister Cho was a real-life Sky Castle case, Justice Minister nominee Han’s daughter was “Ivy Castle,” seemingly referring to Ivy League institutions. He suggested that Han’s daughter, who attends an international school in South Korea, may have written those papers to build her resume that would use when applying for US school admissions later on.