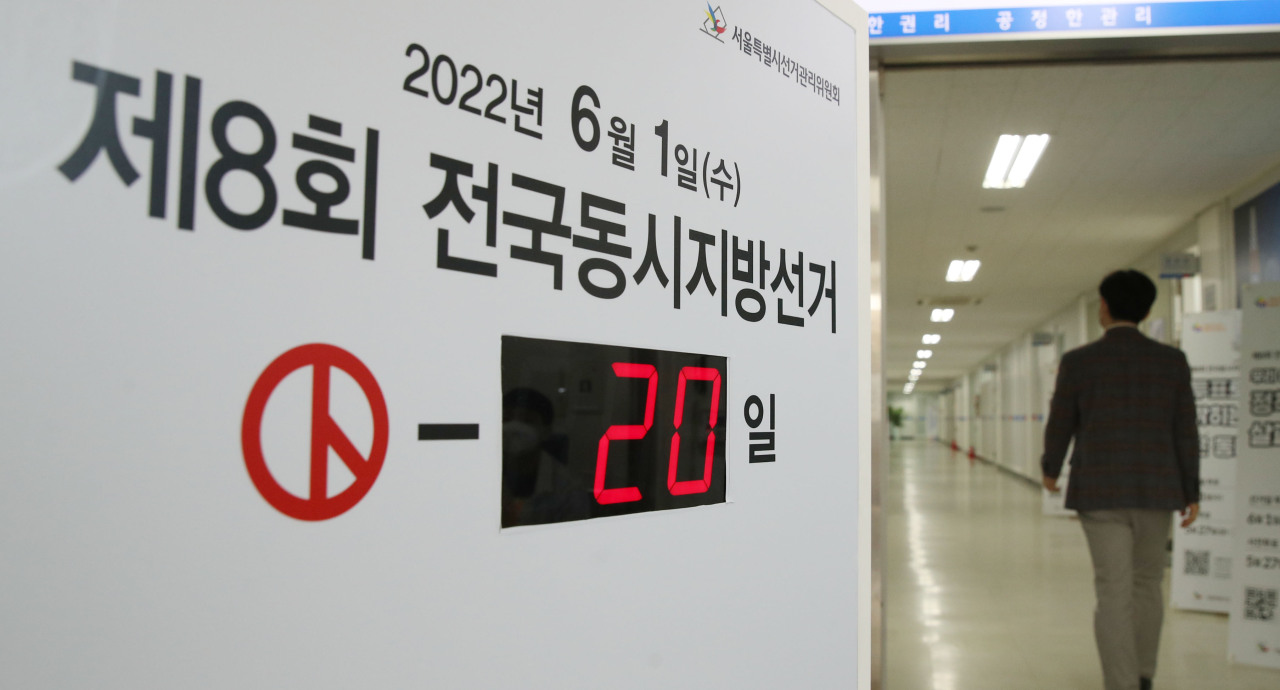 The National Election Commission is receiving applications from candidates seeking to run for local government posts until Friday. Those aged 18 or above – those born before June 2, 2004 – as of election date are eligible to register as candidates.

It is the first election in South Korea in which high school seniors will be able to participate as candidates after lawmakers passed revisions to the Public Official Election Act last year to lower the age requirement from 25 to 18 to be a lawmaker, local council member or local government chief.

Candidates have to be registered as residents of the areas they desire to represent at least 60 days prior to the election date.

The campaign period is set at 13 days -- from May 19 to 31 – during which candidates can make public speeches, distribute pamphlets, run advertisements and install booths to promote themselves.

Public speeches can be made from 7 a.m. to 11 p.m. during those days, and megaphones can be used until 9 p.m. each day. But campaign speeches are barred from being held on public transportation or in some multi-use facilities like bus terminals, subway stations, hospitals and libraries.

The upcoming election is considered to be a reflection of public sentiment toward the Yoon Suk-yeol administration, as it takes place only 22 days after Yoon‘s inauguration. The sentiment could be reflected in the outcome of the parliamentary by-elections for seven lawmaker seats held on the sidelines of the local elections.

The last local election ended in a landslide victory for the Democratic Party of Korea, with the liberal party grabbing 14 of the 17 metropolitan mayoral and gubernatorial posts. It also swept 11 out of 12 legislative seats up for grabs in the parliamentary by-elections held on the sidelines.

While many had expected the result to be a sweeping victory for the winner of the 20th presidential election, the competitiveness seen in the two-way race then has created uncertainty over how the election might actually turn out.

How much each political faction can gather its supporters to head to voting booths could be a decisive factor in determining the winner on June 1. Local elections usually see much lower voter turnout than other elections, meaning both parties could be losing votes

The conservative People Power Party is looking to score another win following its success in the presidential election with Yoon’s victory. The tide has been in its favor since it scored a landslide win in the mayoral by-elections in April 2021.

The party is hoping to win at least 10 out of 17 metropolitan mayoral and gubernatorial posts on June 1 and has put forward well-known candidates to stand the challenge. It is the first election the People Power Party is holding as the ruling party of South Korea.

“We must win to secure and expand the number of our legislative seats and help the Yoon Suk-yeol government succeed. The job of this election campaign committee is to put efforts to have all of these fine candidates we have nominated to achieve victory in their races.”

Lee is leading the party’s election strategy and campaigns with Reps. Kweon Seong-dong and Kim Ki-hyeon, two party heavyweights whose work helped Yoon to victory in March. The two can be trusted to “meticulously respond” to opponents’ moves, he added.

The Democratic Party, on the other hand, is determined to stage a successful comeback after two unsuccessful elections by bringing Lee Jae-myung, who lost against Yoon in the 20th presidential election by a margin of 0.73 percentage points, to lead the central election campaign committee.

The party is facing a somewhat uphill battle against the People Power Party, as the public sentiment is still favorable to the Yoon administration and his affiliated party according to opinion surveys. Many of the candidates put forward by the conservative party for “swing state” regions are leading in polls for the time being.

"The people chose a leader to overturn the regime in the presidential election, but now is the time to achieve balance and time to seek talented workers for state affairs to run in a stable manner,” Lee Jae-myung said in a launch ceremony of the central election campaign committee held Wednesday.

“I am certain voters will make brilliant choices of who to select as workers to make our lives better.”

The local elections, if successful for the liberal party, could serve as leeway for Lee Jae-myung to again bid for the presidency in 2027, not to mention try running to be the next chairman of the liberal party in August.

Lee Jae-myung is also running for a lawmaker post for a constituency in Gyeyang-gu of Incheon in his bid to join central politics after serving as the governor of Gyeonggi Province and mayor of Seongnam before his unsuccessful bid for presidency.

Yet he faces the burden of facing calls for a long halt in his political career if the liberal party finishes the local elections in another defeat, as many denounced him for returning too early after losing the presidential election and failing to assume responsibility for the loss.