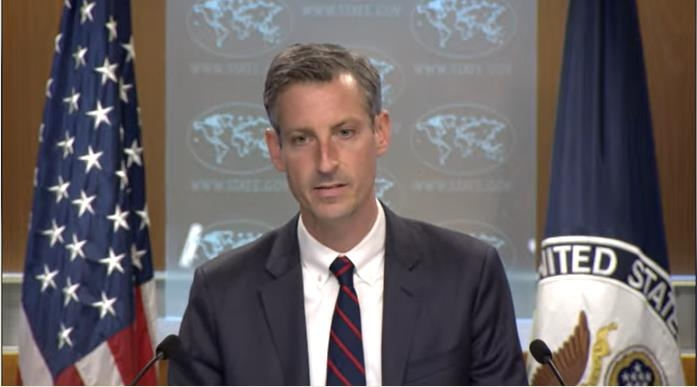 Department of State Press Secretary Ned Price is seen answering questions in a press briefing at the state department in Washington on Tuesday in this image captured from the department's website. (Yonhap)

The United States and South Korea share a common objective of completely denuclearizing the Korean Peninsula and will continue to coordinate closely on ways to achieve that goal, a state department spokesperson said Tuesday.

"We have been and we will continue to coordinate closely with the ROK to address the threat posed by the DPRK's unlawful WMD programs, its ballistic missile program as well, and to advance our shared objective on the complete denuclearization of the Korean Peninsula," Price said when asked about Yoon's offer for North Korea, referring to South and North Korea by their official names, the Republic of Korea and the Democratic People's Republic of Korea, respectively.

"It's an objective we share with this ROK government," he added. "And I know that we look forward to the opportunities ahead over the phone, in person, including when the president travels to the ROK in just a matter of days, to continue these discussions with the new ROK administration on how we can advance and promote that goal."

US President Joe Biden is set to visit Seoul next week for a summit with Yoon, who took office on Tuesday (Seoul time).

North Korea has avoided denuclearization talks since late 2019. It has also ignored all US overtures since Biden took office early last year.

Price reiterated US concerns over North Korea's continuing provocations, which the state department earlier said may include a nuclear test before the end of the month.

"I wouldn't want to put a specific timeframe on it," he said when asked about the possibility of North Korea conducting a nuclear test before Biden's trip to Asia from May 20-24 that will also take him to Japan.

"We have seen three ICBM tests. We have seen additional ballistic missile tests, and we have spoken of our concern that the DPRK may mount another nuclear test in the near term," he added. (Yonhap)