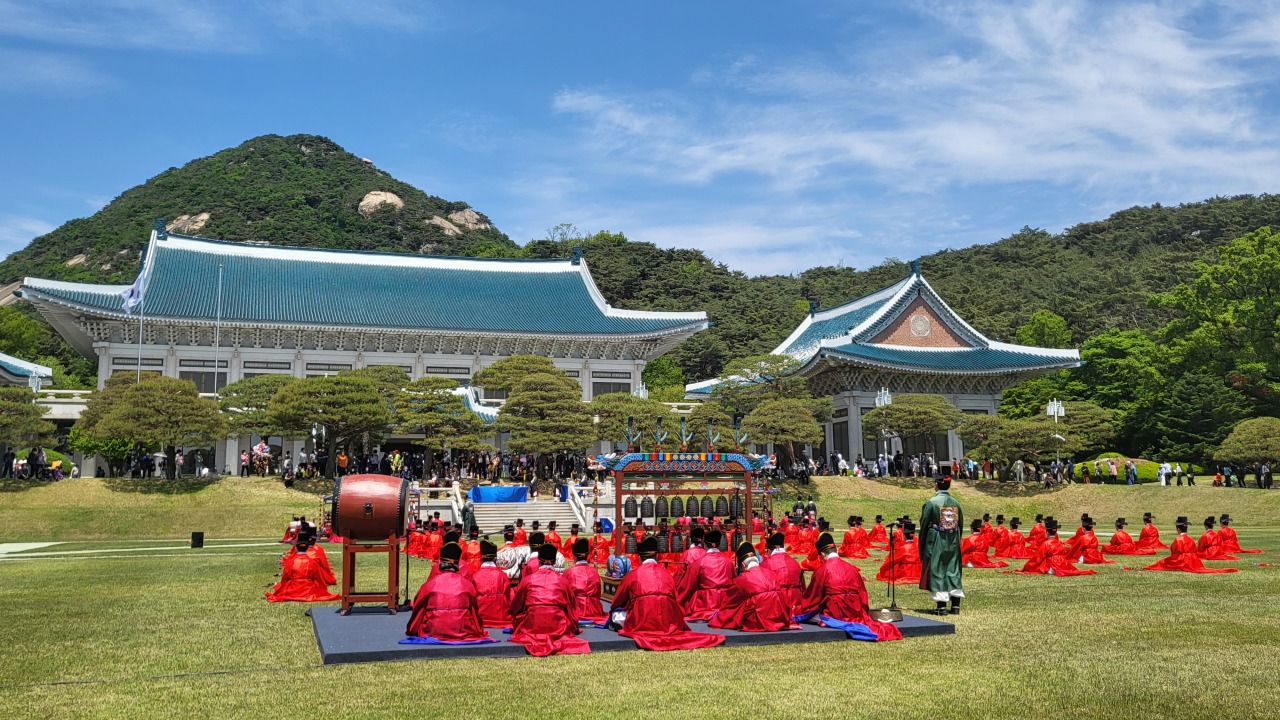 The opening of the gates to Cheong Wa Dae was broadcast live as part of the presidential inauguration ceremony, bringing an end to its function as the office and residence of 12 Korean presidents, from President Syngman Rhee to President Moon Jae-in, since the establishment of the Republic of Korea in 1948.

Jongmyo Jeryeak, a music and dance that accompanied ancestral rites offered to Joseon kings and queens, was among several events held to mark the opening of the grounds. Jongmyo Jeryeak was used to inform the ancestors of good news and thus appropriate for the occasion, according to Song Hye-jin, a Sookmyung Women’s University professor.

The spectacle at the former presidential compound drew scores of visitors.

“I took a day off from work and waited from 6 a.m. to watch both the opening event of Bugaksan trail and Cheong Wa Dae,” an office worker, 29, from Samsong, Gyeonggi Province, told The Korea Herald. “Although I have often seen its exterior through media, I have never stepped inside Cheong Wa Dae. I thought today will be a meaningful time for me, and a historical moment for Korea.” 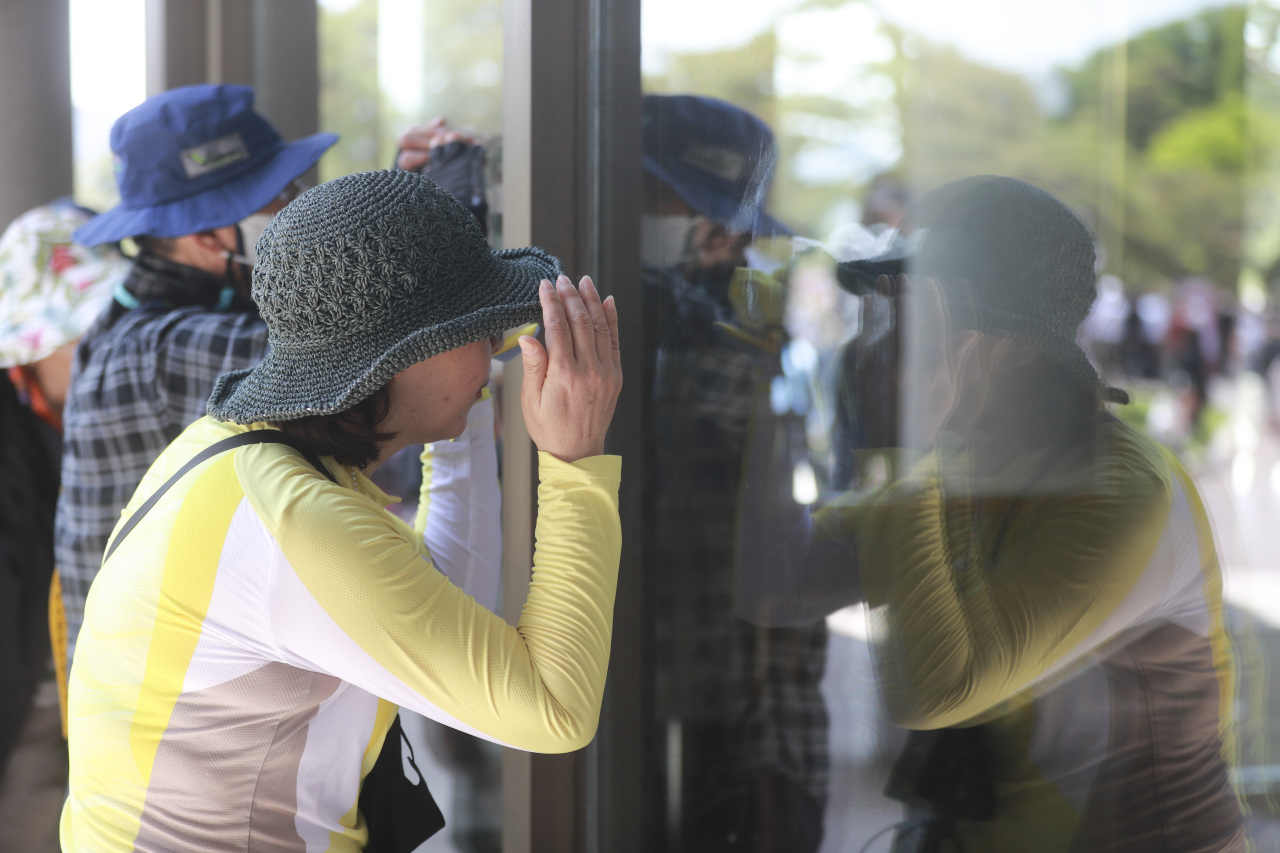 Visitors peer through the window of the main office building at Cheong Wa Dae on Tuesday. (Presidential Transition Committee Joint Press Corps)
“Looking at the grounds, I am half worried and half excited about Cheong Wa Dae being open to public, and the new president moving to Yongsan,” a woman in her mid-60s living in Eunpyeong-gu, northern Seoul, said. “I can feel the beauty and dignity of this place, and I think it is important for South Korea‘s presidential office to look presentable when inviting foreign officials for diplomatic events.”

A five-minute walk from the main gate is the main office building, a two-story building completed in 1991 that housed the president’s office and a reception hall where foreign envoys were received. The building incorporated architectural elements of Joseon-era palaces. The blue roofs which gave the presidential office are made up of 150,000 pieces of blue roof tiles and have come to symbolize Cheong Wa Dae, often called the Blue House in English. 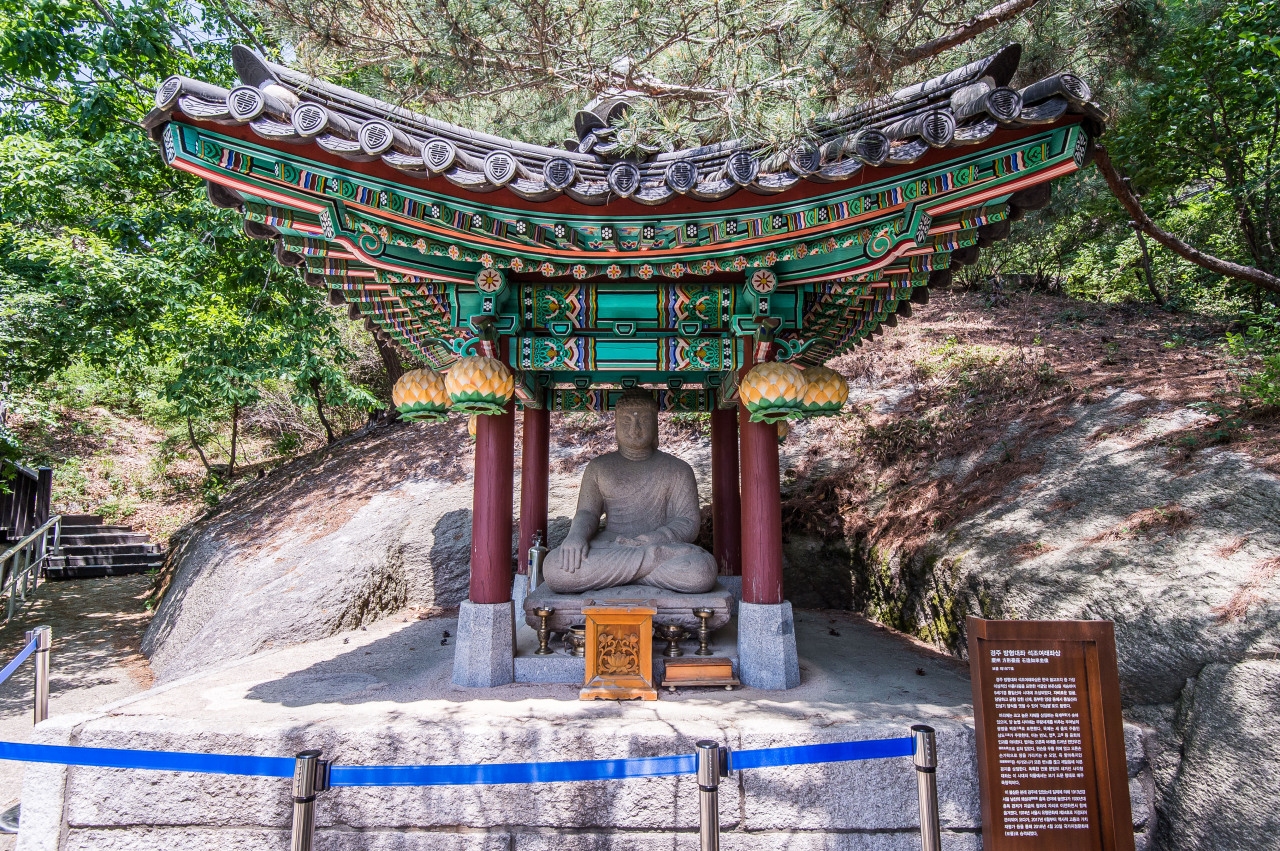 About 200 meters from there, the building known as Sangchunjae -- meaning “a place of everlasting spring” -- comes into sight.

Since 1983, it hosted events and meetings, welcoming high-level guests from both Korea and overseas. The hanok architecture is built with wood from more than 200-year-old Korean red pine trees. 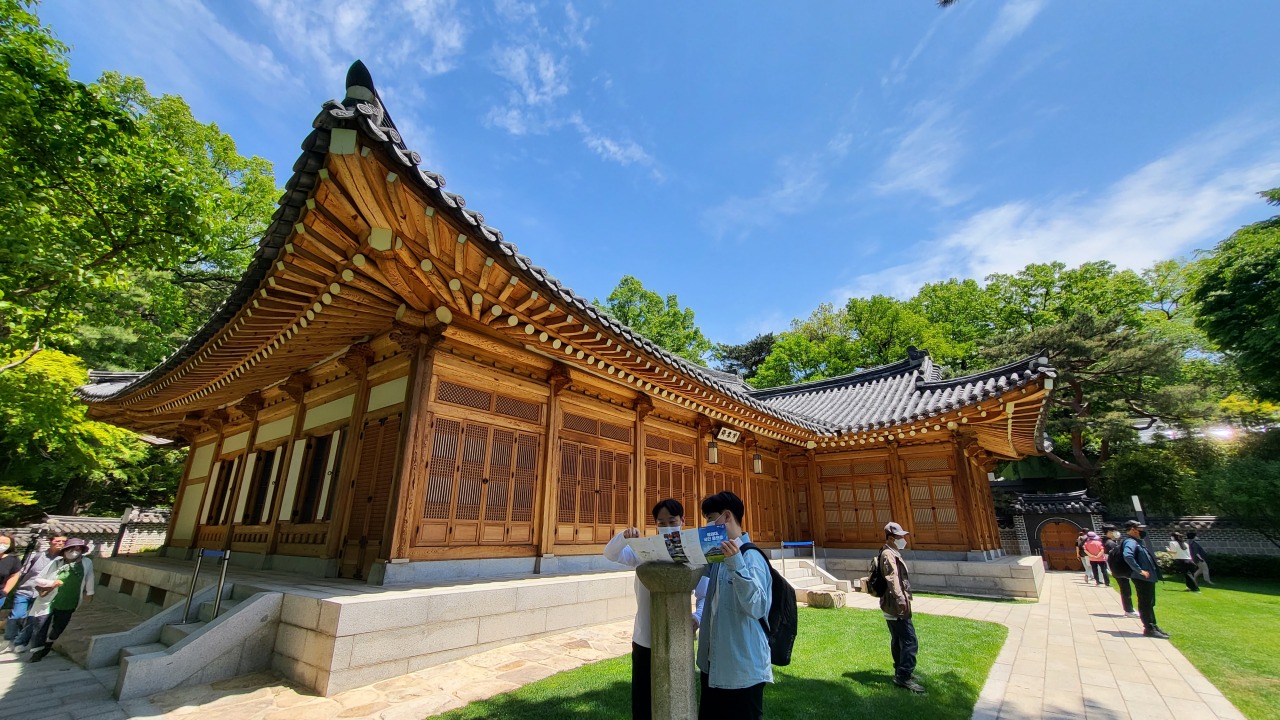 Visitors look at a map of Cheong Wa Dae, in front of Sangchunjae. (Kim Hae-yeon/ The Korea Herald) 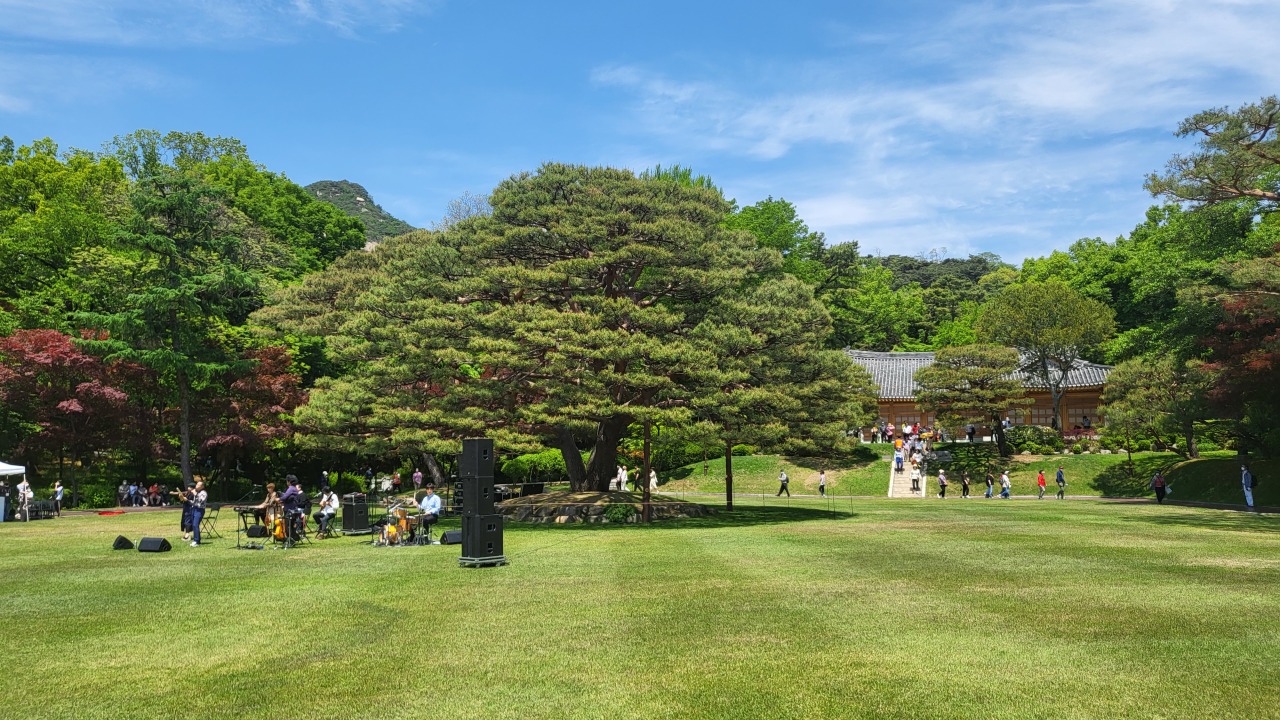 A band plays fusion gugak music in Nokjiwon, located in front of Sangchunjae (Kim Hae-yeon/ The Korea Herald)
Sangchunjae includes an ondol room featuring a traditional floor heating system, and daecheongmaru, a spacious wooden-floored hall. It is known for its beautiful scenery throughout the four seasons.

Nokjiwon, known as Cheong Wa Dae’s most beautiful garden, lies next to Sangchunjae.

Nokjiwon is home to some 120 species of trees, including commemorative trees planted by former presidents. Children are often invited to the garden on Children’s Day, with events that included spending time with the president. 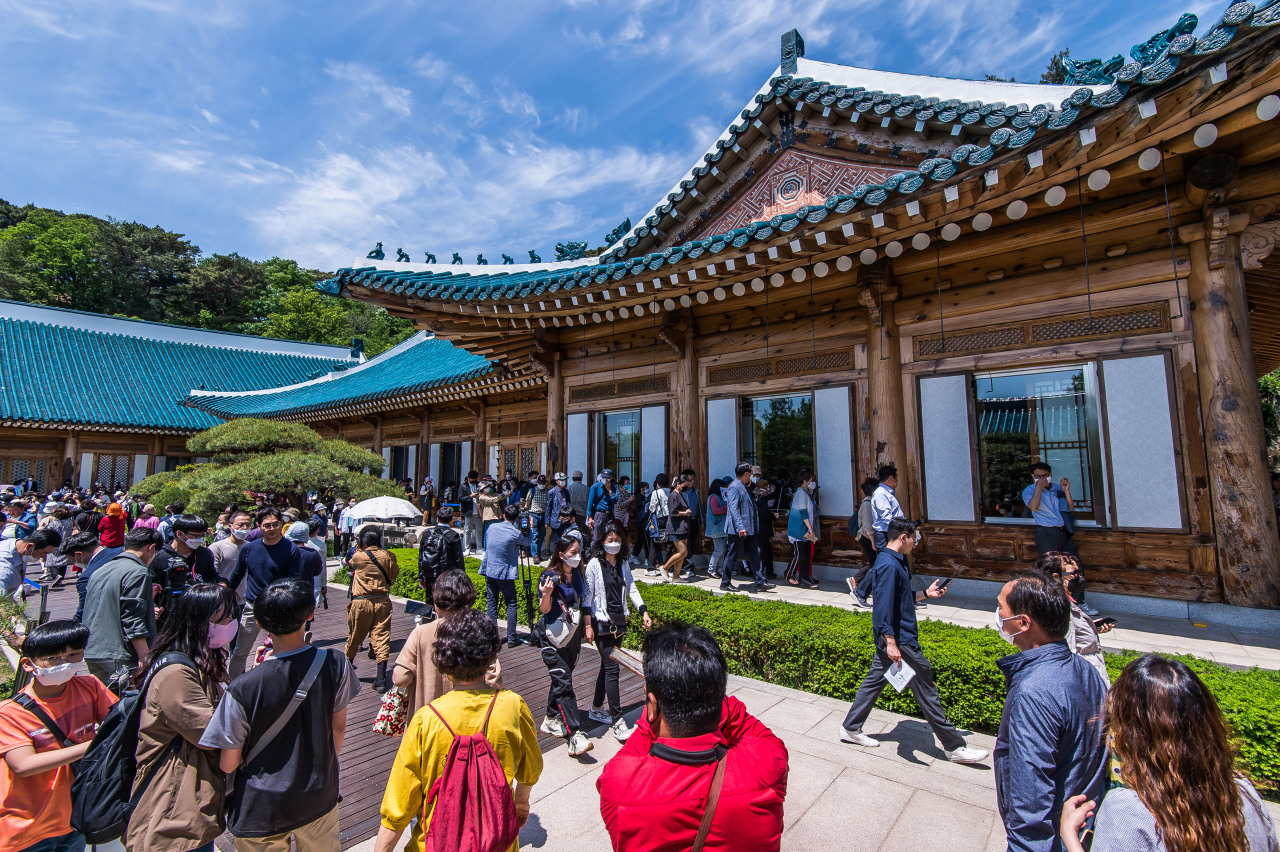 The official also hinted at the possibility of Cheong Wa Dae being designated as a state-registered heritage site in the near future.