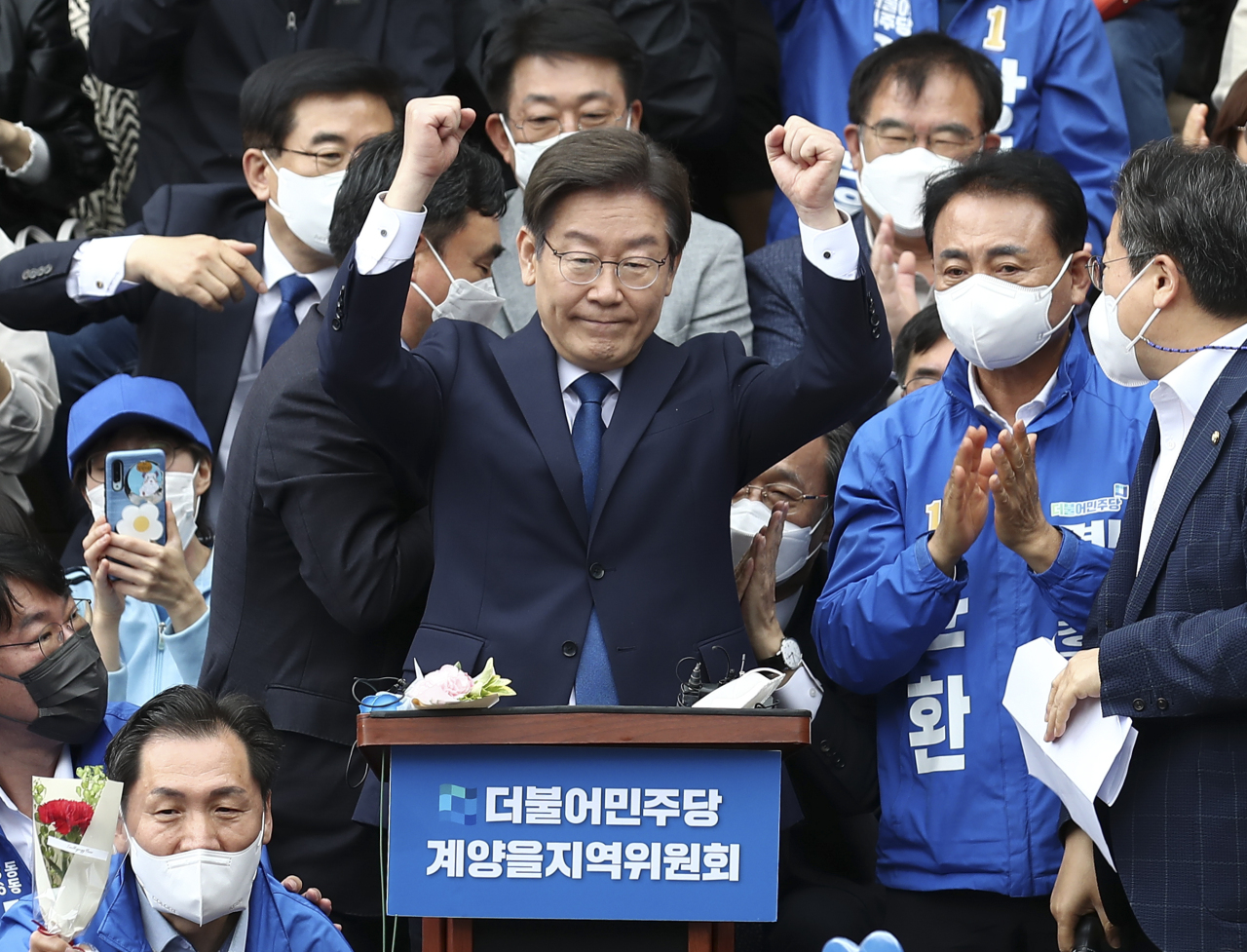 Former Gyeonggi Province Gov. Lee Jae-myung greets his supporters during a press conference held Sunday in Incheon for Lee to officially announce his bid to run in the parliamentary by-election for a constituency in Gyeyang-gu, Incheon. (Joint Press Corps)
Two former presidential candidates on Sunday declared their bids for parliamentary seats in the by-elections, raising the stakes for the rival blocs in the June 1 polls.

On the sidelines of the local elections, the country will be electing seven new legislators as some incumbents have resigned in order to run for the metropolitan mayoral and gubernatorial elections.

Lee Jae-myung, former presidential nominee of the Democratic Party of Korea, on Sunday declared his bid to run for a constituency in Gyeyang-gu of Incheon, left vacant by Song Young-gil who resigned to run for Seoul mayor. Separately, Ahn Cheol-soo, nominee of the minor centrist People’s Party in the presidential election, threw his hat into the ring for the Seongnam constituency.

Lee, in a press conference on Sunday, said after “deep consideration,” he decided to lend his support to the Democratic Party that is undergoing a crisis and will “charge head-on” to lead the party to victory.

“I will give everything I have to win in Incheon and bring majority victory nationwide,” he said.

He had been staying in the shadows since to take responsibility for the loss, while many had expected Lee to return to the spotlight in August to run for the chairman seat of the Democratic Party. Lee said he could not overlook the difficult situation the party is under for the time being.

“Many have advised me to keep distance from the local elections for my political sake, and I was also pessimistic about returning early,” he added. “But I could not turn away from the difficulty facing this party and the risky situation on the local elections.”

Lee’s official announcement comes as the Democratic Party on Friday named him as the official flagbearer for the parliamentary by-elections. The liberal party’s leadership recently asked Lee to join the election as the party needs heavyweights to give guidance on the election, sources said.

The People Power Party strongly denounced Lee’s early return to politics, vowing to find the right competitor to Lee in the parliamentary by-elections. Yet the conservative bloc faces an uphill battle for the constituency, which has been a Democratic Party stronghold for years.

Former Rep. Yun Hee-suk has been floated as a potential flagbearer for the People Power Party to face Lee in the by-elections. She has staunchly opposed the Moon Jae-in administration’s real estate policies and is known for running a debate for 12 hours and 47 minutes straight as a filibuster move in 2020.

Having previously served as a researcher for the Korea Development Institute for years, Yun is touted as a worthy figure to run against Lee, having stressed that she can help boost economic growth. Lee has also emphasized the same with his experience as mayor of Seongnam, Gyeonggi Province, and governor of Gyeonggi Province.

The People Power Party is reviewing nomination requests from three other figures for the legislative seat of Incheon aside from Yun. 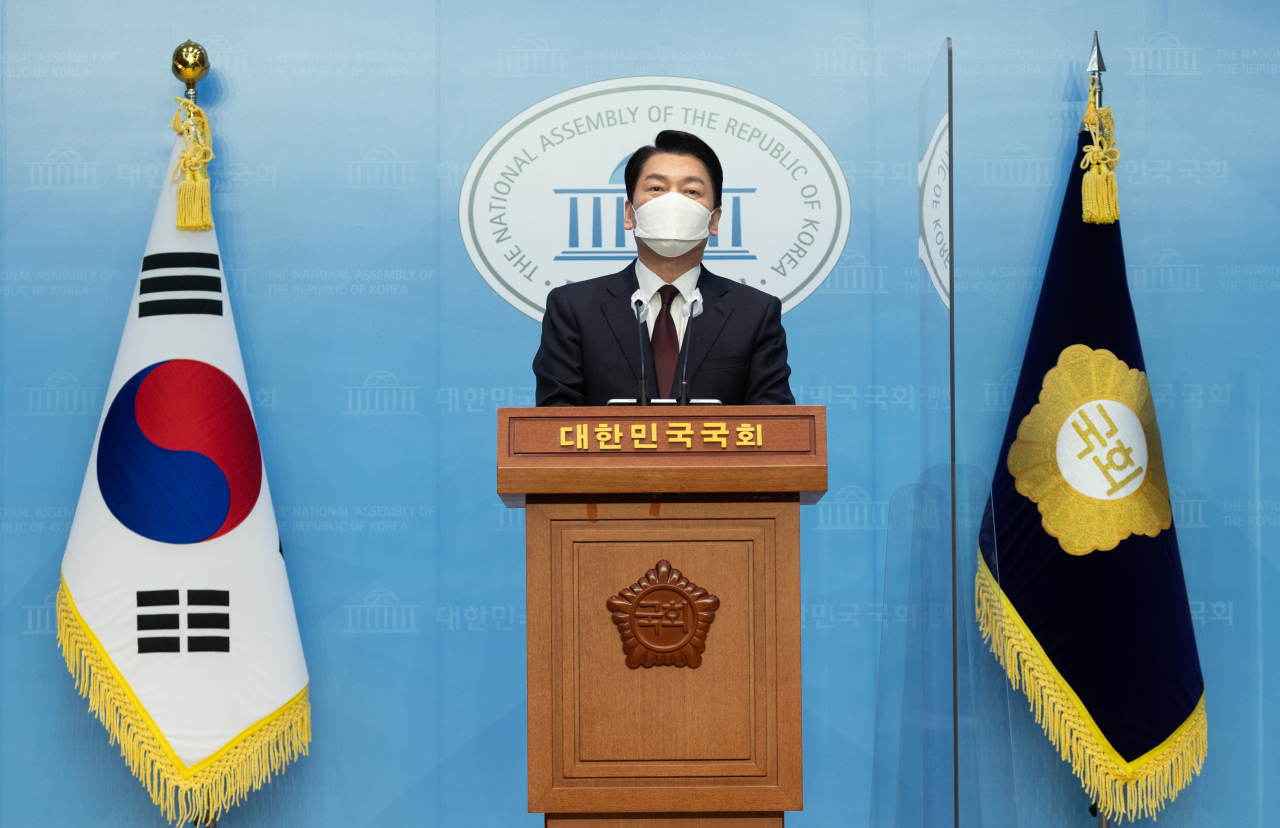 Ahn Cheol-soo, head of the transition team for President-elect Yoon Suk-yeol, speaks during a press conference held Sunday at the National Assembly. (Joint Press Corps)
Attention is also high for the Seongnam constituency, which has been left vacant after Kim Eun-hye decided to bear the People Power Party’s flag to bid for the Gyeonggi Province governor post.

Meanwhile, Ahn, who served as the head of the presidential transition team for Yoon until Friday, also on Sunday declared he would run for the parliamentary seat upon “sincere requests from inside and outside the party,” at a press conference at the National Assembly.

Ahn is expected to bear the flag of the People Power Party as Ahn’s People’s Party had merged with it. During the presidential race, Ahn merged his candidacy with Yoon’s that paved the way for the conservative bloc’s victory.

He was touted as a suitable figure to represent the conservative party in Seongnam due to his background as an entrepreneur and because his antivirus software firm, AhnLab, is based there.

At the moment, three figures aside from Ahn have already announced their bids to run for the constituency in Seongnam. Park Min-sik, a special assistant to Yoon, is one of the figures who has made his declaration. The People Power Party is preparing to make a final decision by Tuesday.

The Democratic Party has already selected former Rep. Kim Byoung-kwan to bear the party’s flag and compete in the by-election in Seongnam. Kim Byoung-kwan has been serving as chief of staff to the National Assembly speaker after losing the constituency to Kim Eun-hye in the 2020 parliamentary elections.