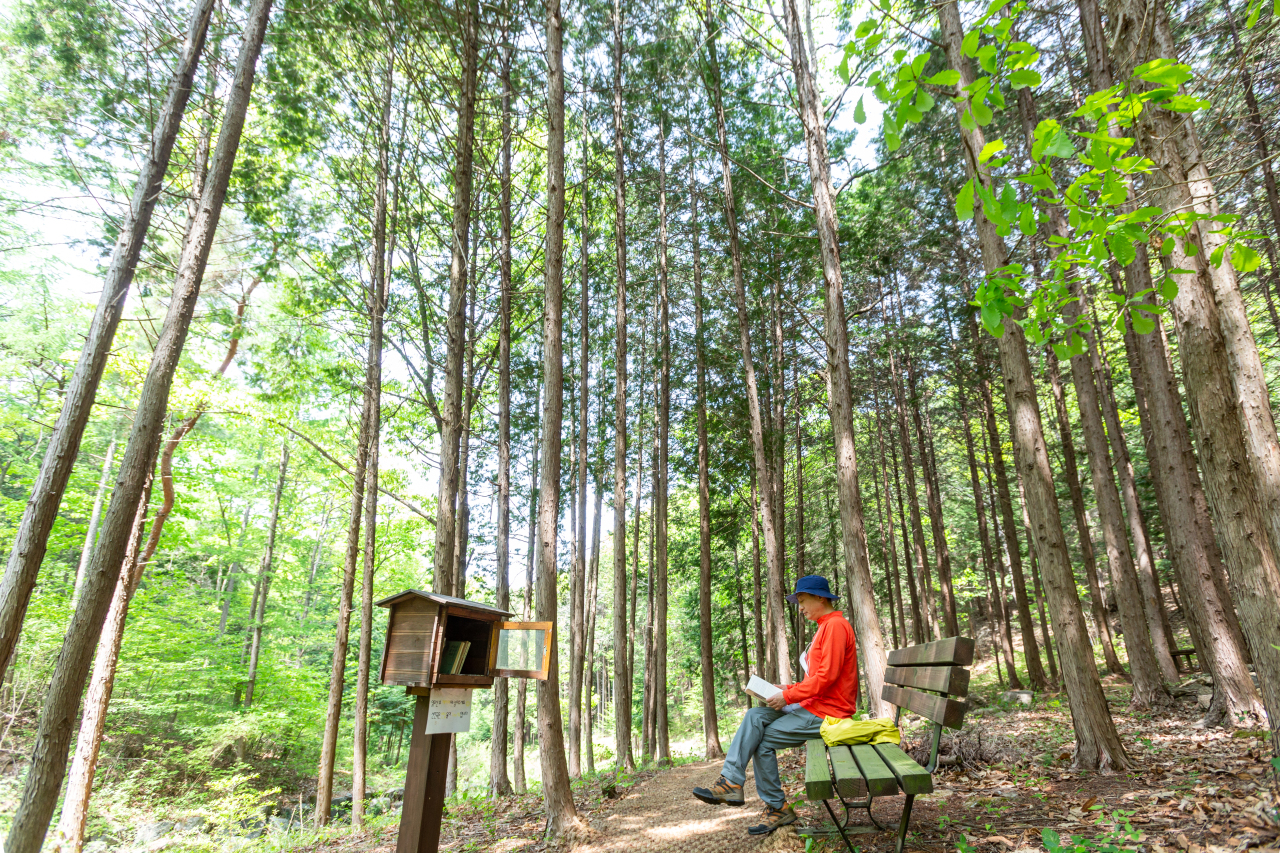 A visitor pauses to read at Gyeongcheon Cypress Forest on April 28. (Wanju)
WANJU, North Jeolla Province -- With the lifting of the outdoor mask mandate, festivals and cultural events around the country are starting to liven up again.

Wanju, some three hours’ drive south of Seoul, is a small county in North Jeolla Province almost entirely surrounded by the famous hanok city Jeonju. It is a quiet serene county which recently became popular as a “BTS’ healing spot” and “BTS pilgrimage” site.

In late April, the air in Wanju was warm and cozy enough to confuse the visitors -- it felt like early summer.

Wanju was dressed in different colors, the flowers on trees blossoming and flowers pushing through the earth.

After a 40-minute walk on a low slope that starts at the Gyeongcheonaein Obok Village, a dirt road appears, signaling that the forest is near.

A wooden bridge, which serves as the entrance to the forest, is a perfect spot for taking photos against the background of lush cypress trees

With 15,000 trees in an area measuring 48,000 square meters, the forest provides a unique experience to the visitors as if they were cut off from the real world.

The forest’s 1.78-kilometer eco-trail is divided into two sections -- cypress section and pine tree section. The terrain is relatively flat with some stairs and low and gentle uphill slopes, allowing visitors of all ages to enjoy the forest. 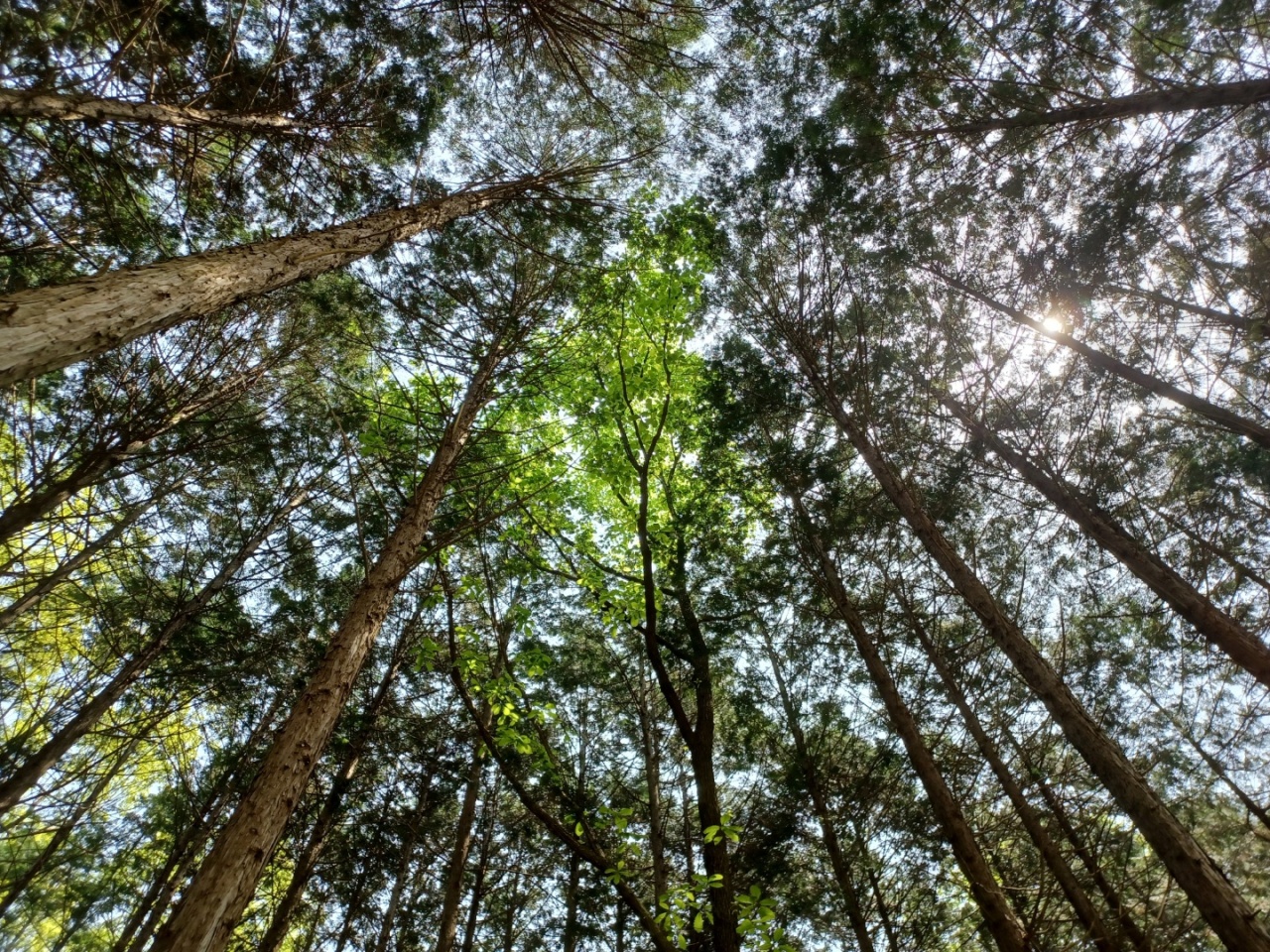 The tall cypress trees provide shade from the dazzling sunlight in Gyeongcheon Cypress Forest. (Lee Si-jin/The Korea Herald)
While the tall trees provide cool shade and allow a cool breeze, the wooden benches and mailbox-shaped bookshelves entice visitors to sit down and read for a while in the fresh air. 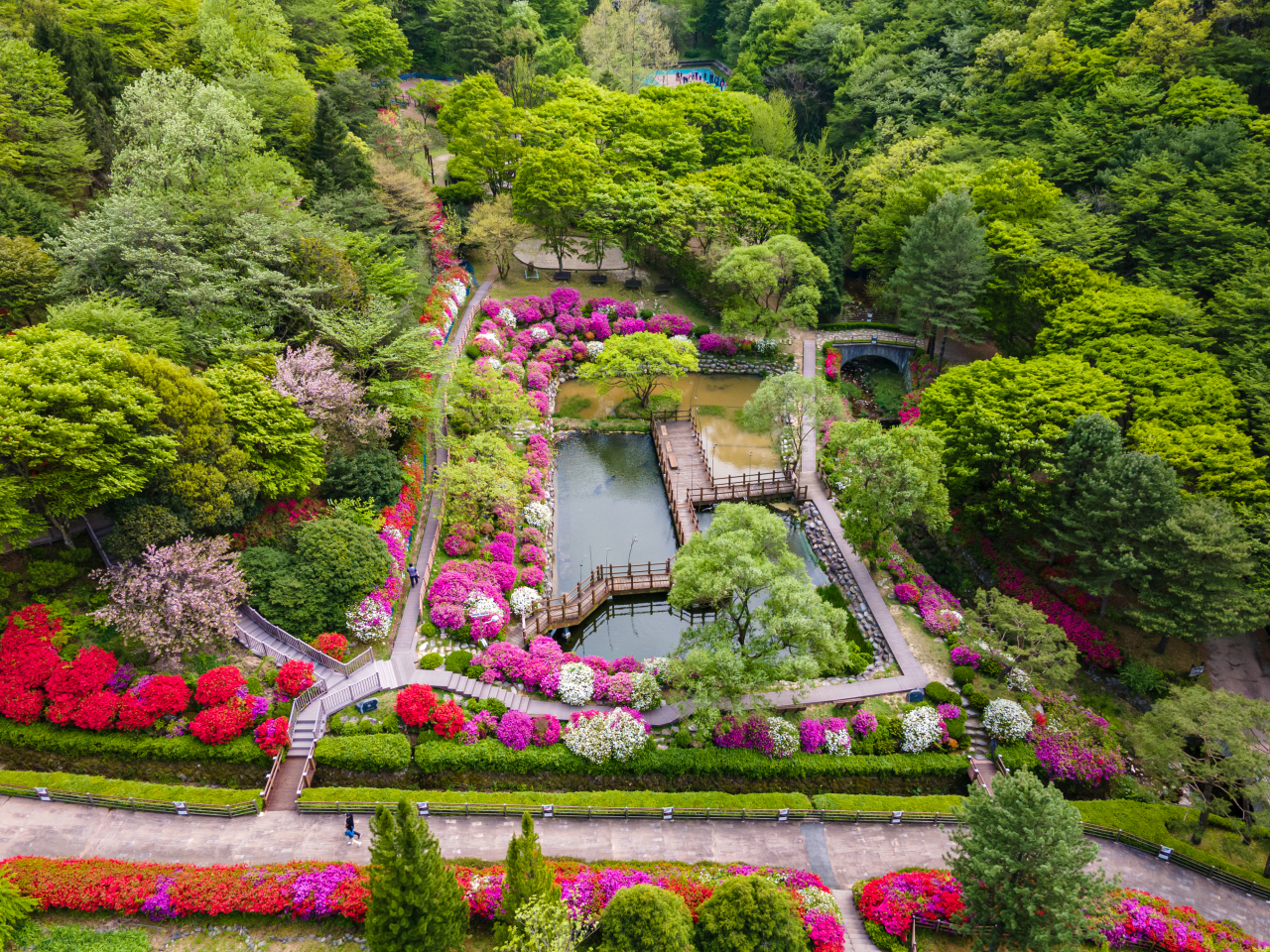 Located at Dongsang-myeon, Daea Arboretum is a home to almost 2,600 different types of plants and flowers.

The arboretum has different attractions every month, ranging from tulips in March and April, to lilies from June to August and chrysanthemums from September to November.

But the Daea Arboretum’s natural habitat for bleeding hearts makes it more special in the spring.

Discovered in 1999, the 70,000 square-meter habitat is visited by flower lovers to see the pink and red heart-shaped flowers, which remain in full bloom from April to May.

“This is the biggest natural habitat of bleeding hearts in South Korea,” forest reader Kim Byung-kook told The Korea Herald.

“Some people may wonder why there are many medium-sized trees near the flowers. The bleeding heart is a shade plant, so we have planted zelkova trees to help the flowers’ growth,” Kim added. 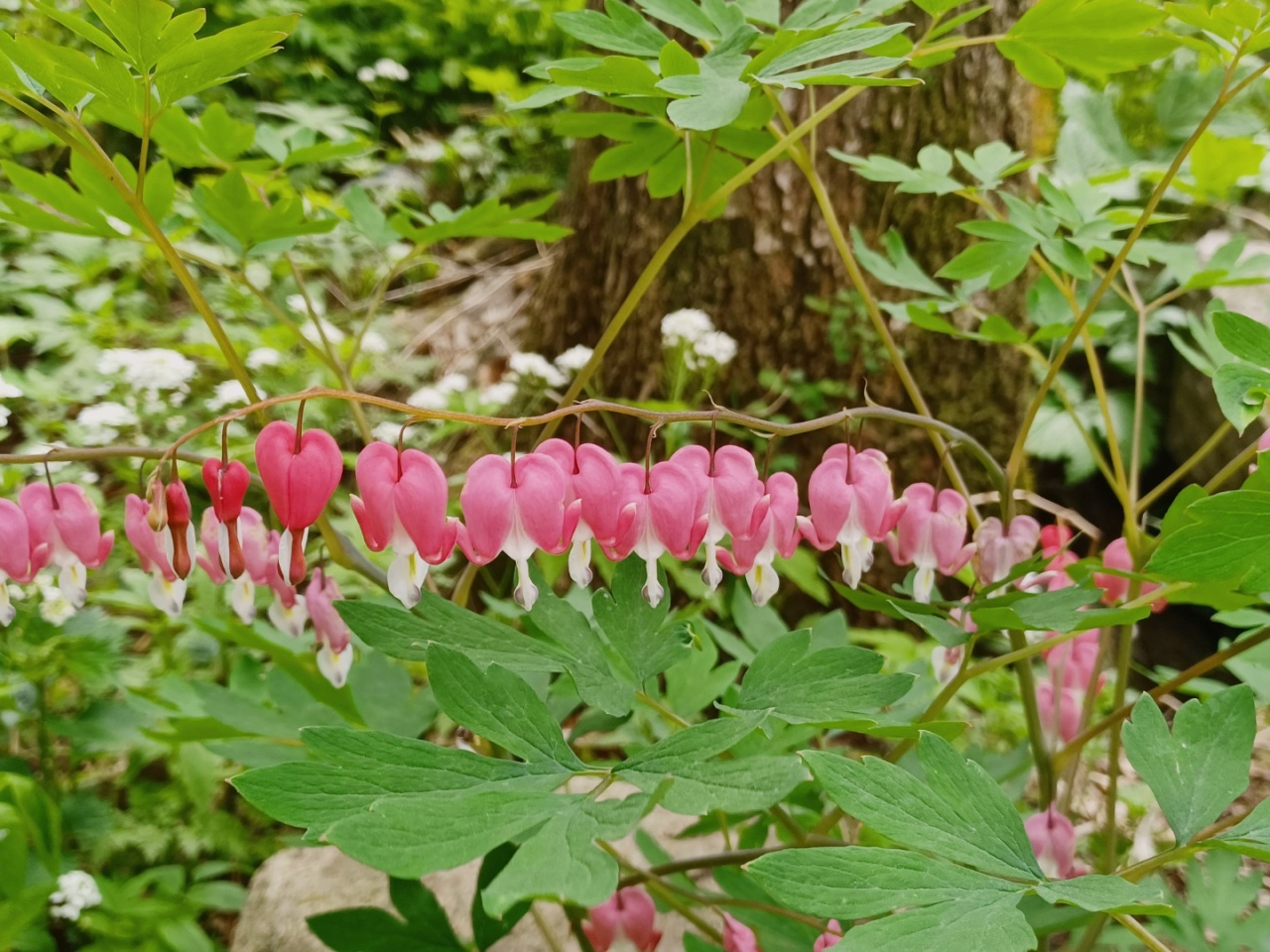 Visitors can see the bleeding hearts in full bloom from April to May. (Lee Si-jin/The Korea Herald)
The bleeding hearts aside, Korean fairybells, peonies and other flowers signal that spring has finally arrived. 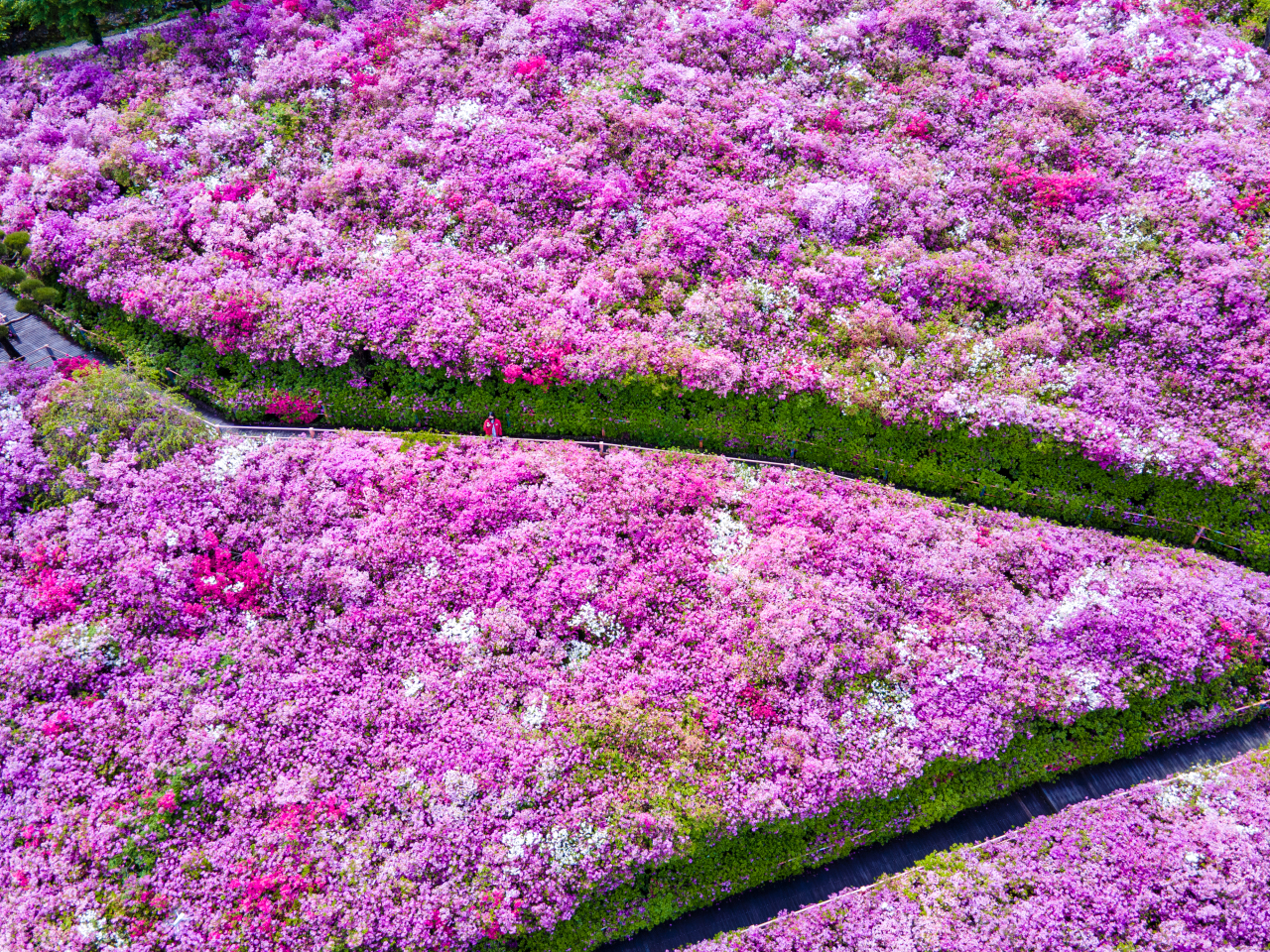 After a short 10-minute walk uphill from the entrance, purple azaleas greet the visitors, swaying left and right with the spring breeze.

While the seemingly unending azaleas dominate the space, wild flowers throughout add a different flavor to the Hwasan Flower Garden. 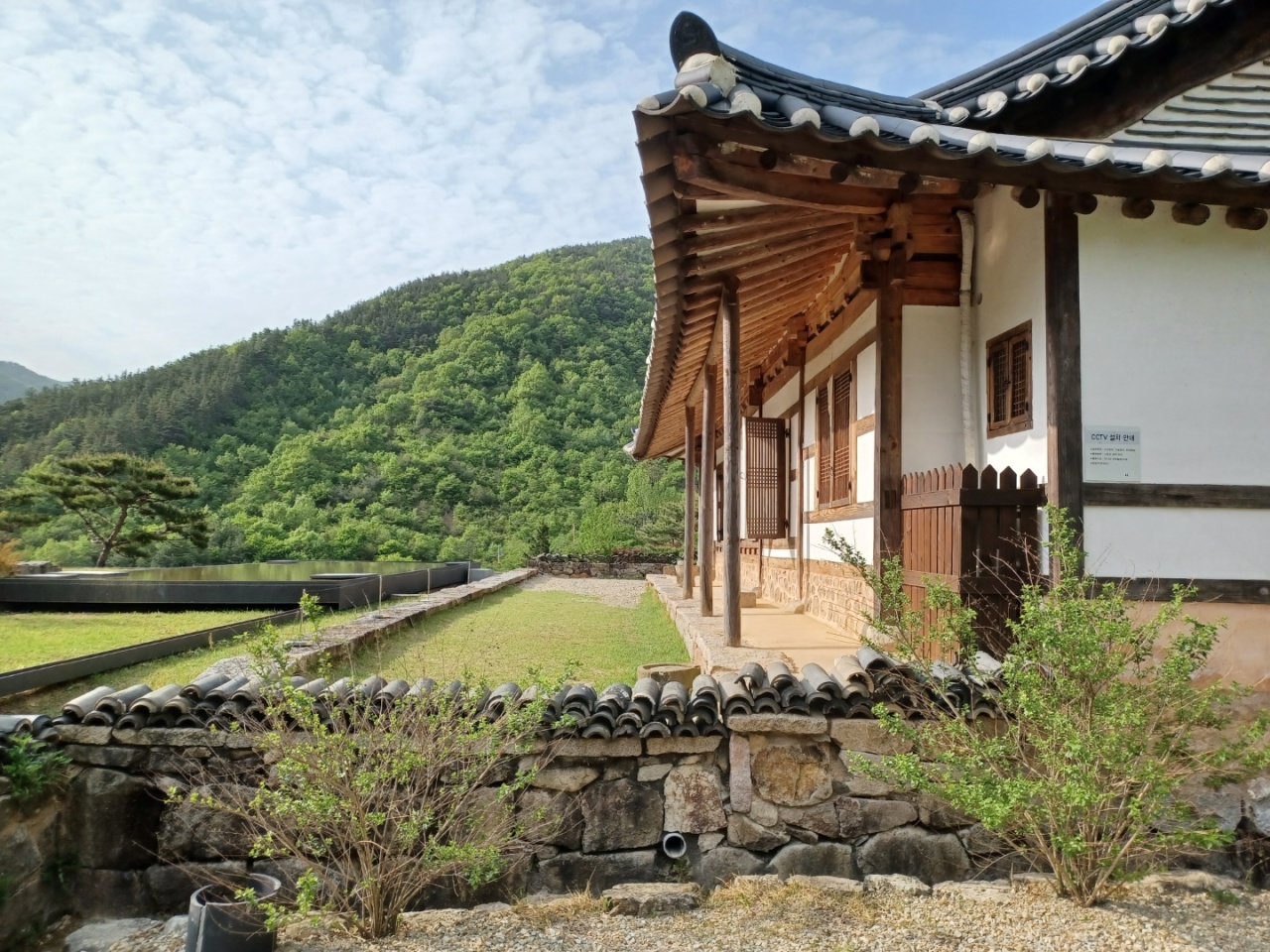 Guests can stay overnight in Awon’s 250-year-old hanok. (Lee Si-jin/The Korea Herald)
Awon, meaning “our garden” in Korean, is a museum in Soyang-myeon, where you can also stay in a hanok.

The tranquil atmosphere of Awon, with only the occasional sounds of grasshoppers and birds chirping, is an ideal place to relax and take emotional refuge from the bustling city life. 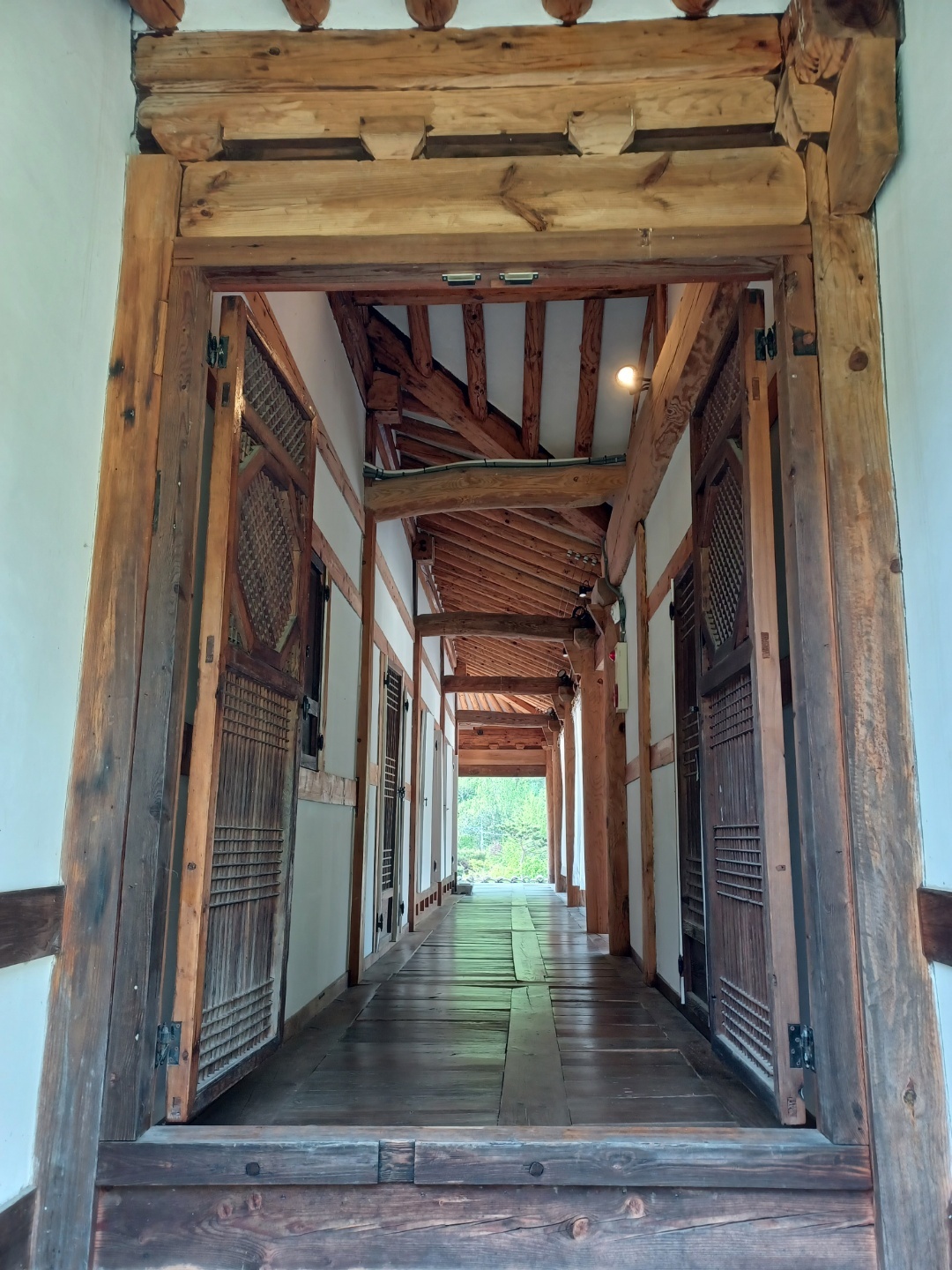 “Awon is open to the public from noon to 4 p.m. Visitors can enjoy the hanok and the paintings and art works presented in the museum. After 4 p.m., the place is used exclusively for the (hanok) guests, allowing them to have a safe, comfortable time during their stay,” Awon Director Jeon Haru told The Korea Herald.

“The guests visit Awon as friends, couples and family. Their age varies from those in their 20s to 60s,” Jeon added.

The total of 23 hanok can be seen in the village, used as cafes, restaurants, hotels and more.

Located at Soyang-myeon, the center of Wanju, the village became a popular destination for Gen MZs for the stylish cafes as well.

With the spacious seating areas, interesting furniture and an open garden with traditional decorations, O’s Gallery allows visitors to experience a luxurious afternoon break, drinking coffee while enjoying the beautiful landscapes and paintings by local artists.

A 2-minute walk from O’s Gallery, the Osungje Reservoir offers a splendid scenery with the mountains and sky reflected in water. 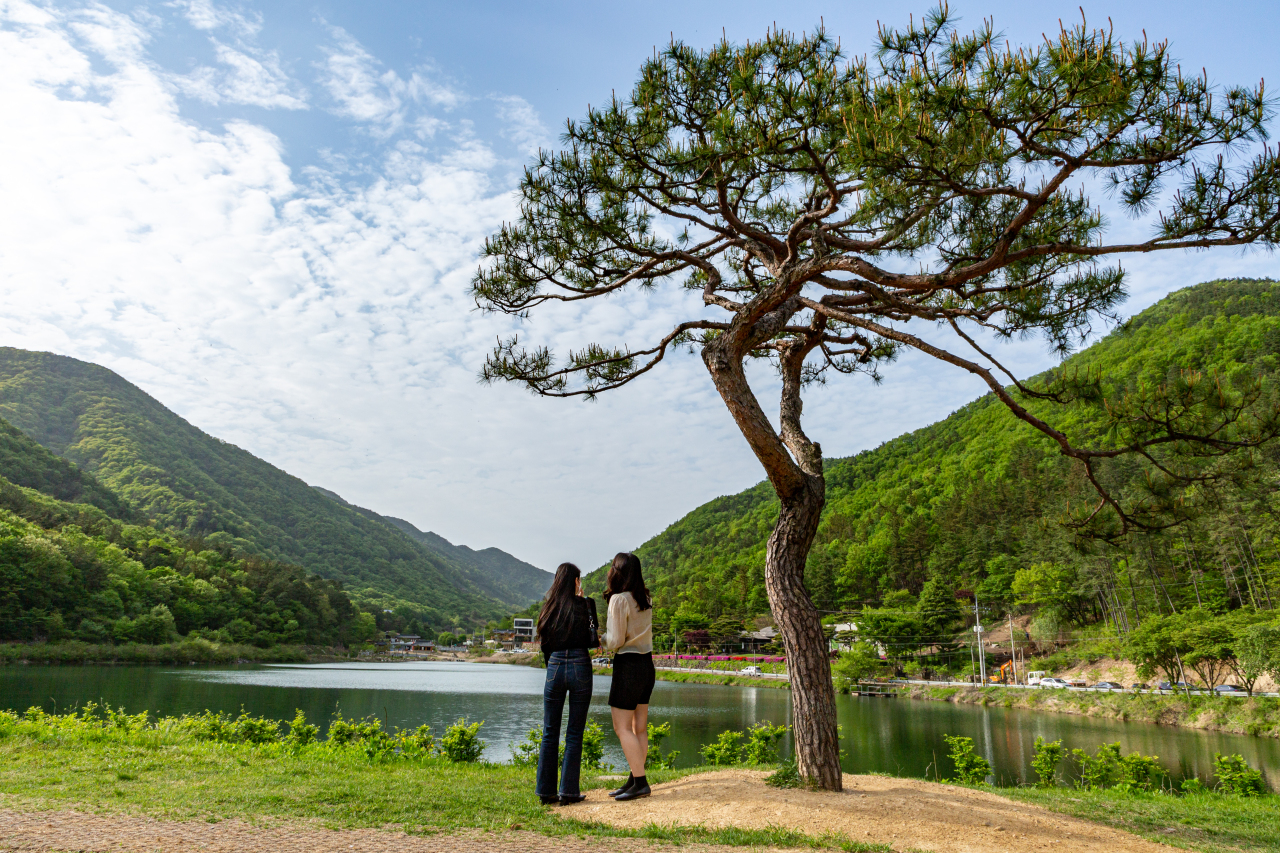 Visitors pose for a photo at Osungje Reservoir on April 28. (Wanju)
A pine tree, standing alone, has become one of the most famous Instagram photo zone of Wanju after all seven members of BTS had photographs for the photo album of “2019 BTS Summer Package in Korea” taken here.

In response to the growing popularity, various areas of Osung Hanok Village are featured in many TV dramas and advertisement as well. 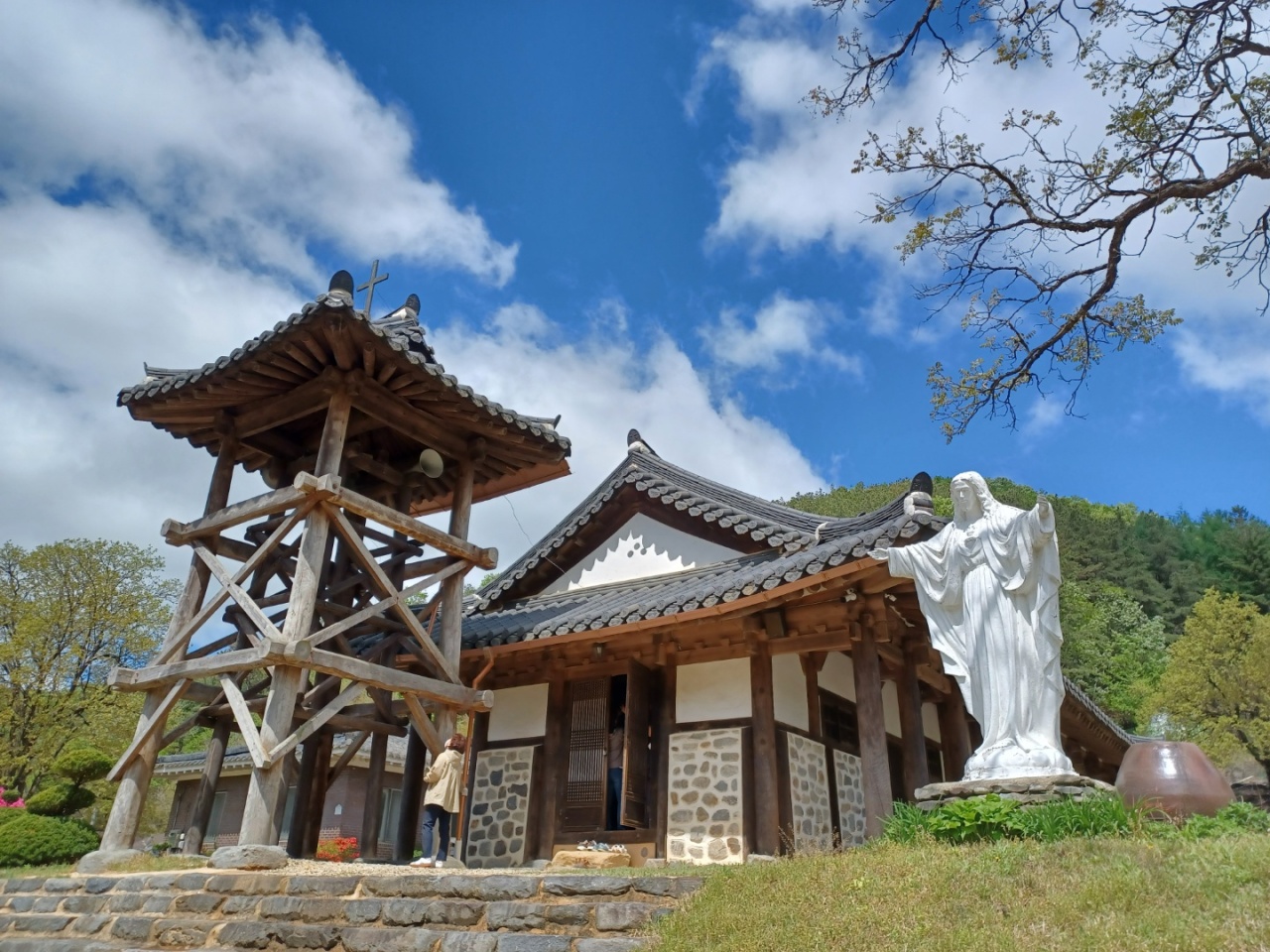 The second ever Catholic church built in South Korea, Doejae Catholic Church was destroyed during the Korean War (1950-1953) and reconstructed in 2006.

Applying a Christian basilica layout to a Korean-style wooden structure, the church presents a unique charm with stone stairs, pebble-covered pathway and a mountain behind the building, which are characteristics commonly found at Korean Buddhist temples.

While the building remains a valuable example of the process by which Western culture was adopted in Korea, the church has become one of the iconic landmarks of Wanju, as a traditional hanok immersed in nature. 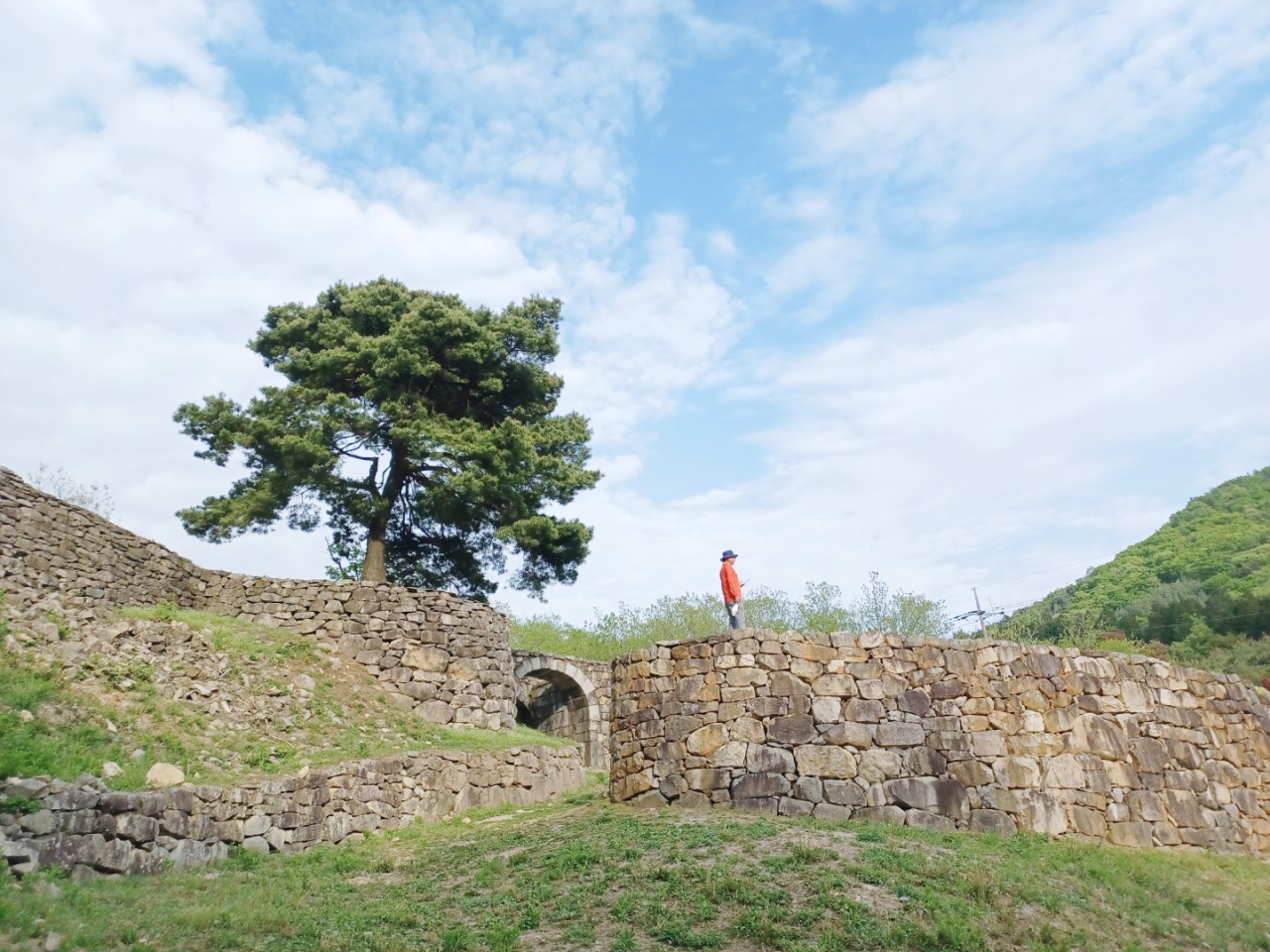 The fortress features in a BTS photo album as well.

After climbing the paved, flower-lined path for 15-20 minutes, visitors will reach an observatory with a view of a waterfall tumbling down the mountainside, a wall of blue satin threaded with silver, pounding the rocks and sending cool air to the visitors, a welcome relief after the short hike.