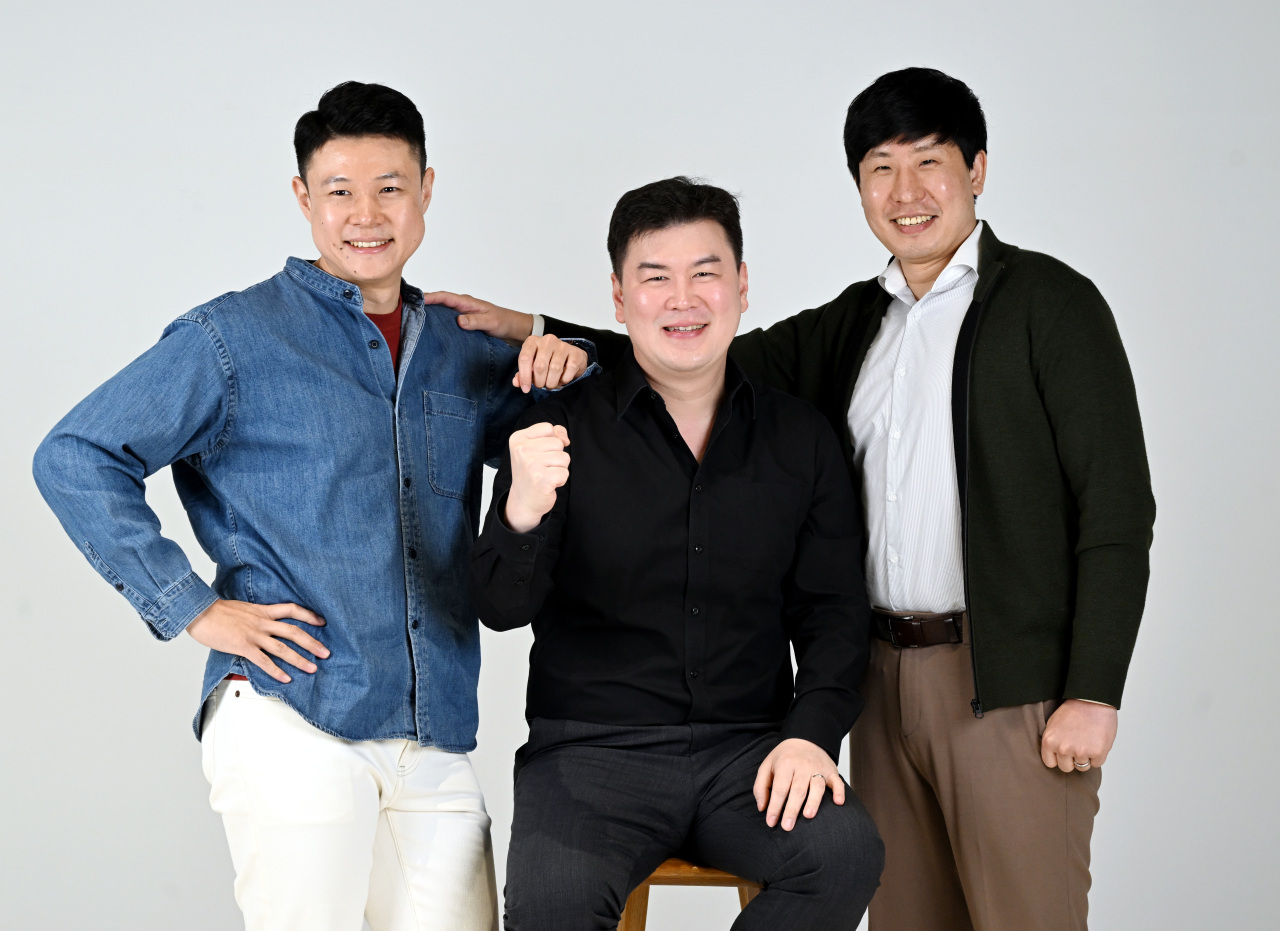 From left: Plana’s Chief Product Officer Lee Jin-mo, CEO Braden J. Kim and Chief Strategy Officer Ahn Min-young pose for a photo during an interview with The Korea Herald in Seoul on Monday. Park Hyun-koo/The Korea Herald
Flying is a common mode of transport when it comes to domestic travel. Whether it’s for business or pleasure, people need to travel to the nearest provincial airport to visit other cities. That’s an extra one or two hours of traveling, in addition to the flight time.

But according to Plana, a South Korean startup dedicated to building vertical takeoff and landing aircraft powered by hybrid e-powertrains, UAM can dramatically reduce travel time, as they can easily take off inside the city via “vertiports” -- landing pads for flying cars.

For Braden J. Kim, a 38-year-old aerospace and mechanical engineering expert who founded the UAM startup in 2020, what makes UAM more feasible is the company’s hybrid powertrain.

“We thought that UAM’s powertrain run by electrical batteries have restrictions and that’s how we came up with the conclusion that only hybrid technology can offset the potential problems caused by technology and the product’s profitability,” Kim told The Korea Herald.

Plana says its hybrid technology can be simply explained as attaching a gas turbine-based charger to the UAM aircraft’s battery. Such turbines have been used in standard aircraft for decades as the Auxiliary Power Unit, and its technical credibility and safety have been guaranteed. The lifespan of such hybrid e-powertrain batteries is almost semipermanent, compared to the standard e-battery lifespan at around three to four years.

Such technology can allow UAM vehicles to increase travel range so it can move between cities, according to Plana.

“As hybrid models can utilize the existing airspace and air-traffic system of regional airplanes and helicopters during mid- and long-range flights, it will give us an early intercity market opportunity, relatively free from infrastructure constraints and social acceptance issues in a dense urban area,” said Kim.

Plana is not the only player in the UAM field that’s focusing on hybrid technology for UAM powertrains. Japan’s Honda announced last year it would create the turbine-based hybrid UAM so that it could move between two cities. South Korean defense electronics and smart tech service provider Hanwha System announced a plan to commercialize UAM based on the gas turbine and battery by 2030 and fly a fully hydrogen fuel cell model by 2035.

“UAM is not a market one can monopolize, due to the industry’s massive size involving various stakeholders -- telcos, construction companies for vertiports, firms managing and training pilots, local governments, regulatory authorities and more. That’s why more players in the field can help lead the ecosystem to grow,” Kim added.

Under the company vision “Design the new sky,” Kim’s two other co-founders, both 35, said Plana wants to bring UAM to the mainstream.

Plana Chief Product Officer Lee Jin-mo also said UAM will allow customers to take off from vertiports just 10 to 15 minutes away from one’s home or workplace.

“We want to primarily focus on the premium market serving long-distance routes and then move on to the short-range travels so the price of travel can become equivalent to those of taxis or low-cost carriers,” said Lee.

Changing the mobility paradigm also means not just making UAM aircraft that’s accessible or affordable, but also widely accepted by the public, according to Ahn and Lee. 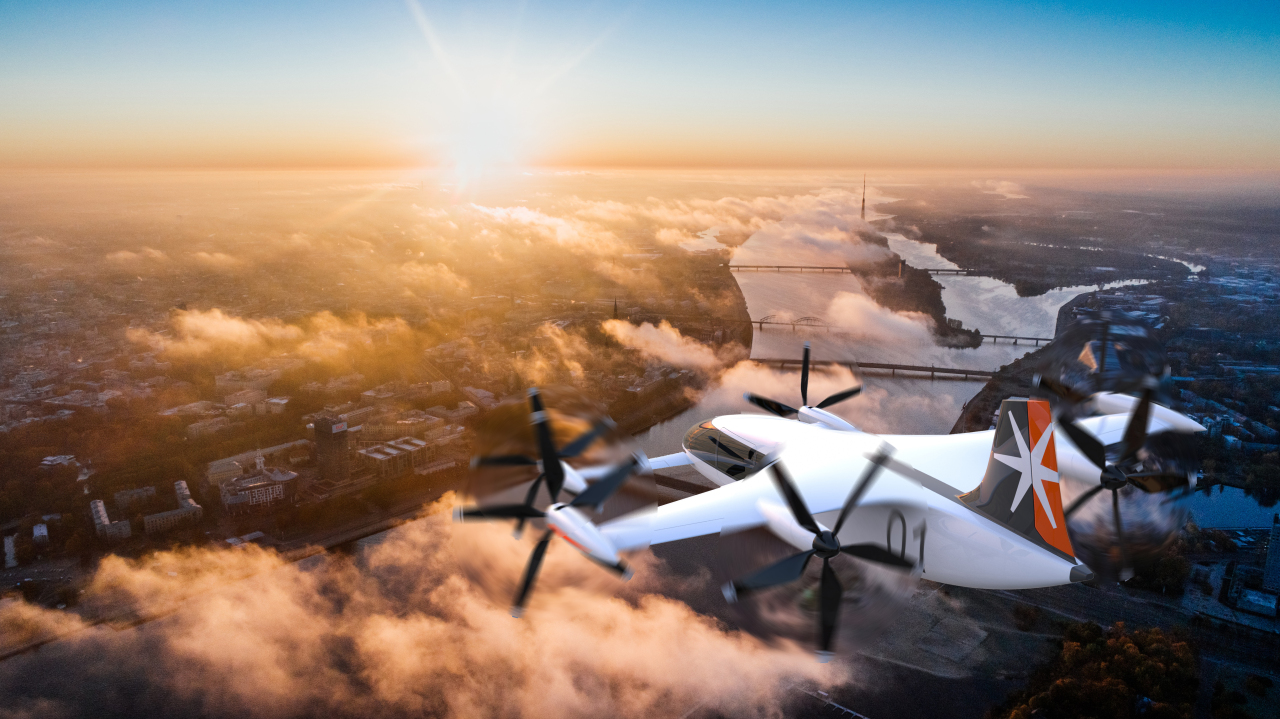 A rendered image of Plana’s advanced urban air mobility aircraft Plana
“UAM will become a concept of mobility that’s not just used for long-distance travel or business trips between the cities, but simply a means of transportation for a daytrip to cities within 300 miles (480 kilometers) -- UAM will help expand the definition of people’s idea of a daytrip,” said Lee.

Aiming at releasing smaller-sized cargo delivery aircraft by 2024 and passenger-carrying UAM by 2028, Plana said it would also seek partnerships with existing market leaders.

“In terms of the cargo delivery business, UAM will be useful and will help the market grow even bigger. Just like Amazon or Google’s parent company Alphabet has been operating delivery services using drones, we are very interested in joining hands with local logistics firms like Coupang and CJ to secure both data and customers,” said Kim.

While existing market pioneers like Joby Aviation and Volocopter have partnered with South Korean conglomerates for future business opportunities here, Plana is betting on global talents.

All three founders have built their expertise globally. A recipient of engineering scholarships from Korean and Japanese governments, Kim graduated from Nagoya University and holds a doctorate in mechanical engineering at MIT. He most recently led Hyundai Motor Group’s UAM vehicle development department.

Ahn, who studied at Nagoya University and was also a government scholarship recipient, finished his master’s degree in electrical engineering at the University of Tokyo, worked as a researcher at LG Electronics and pivoted toward business strategy. He currently leads Plana’s strategy and operation.

Lee, after graduating from KAIST, completed an integrated doctoral program in computational mechanics at Carnegie Mellon University before moving on to work at Hyundai Motor Group. There he helped develop noise and vibration technology applied to vehicles such as the GV80. He currently serves as an adjunct professor at Postech teaching a UAM-related course.

Such background and professional expertise are commonplace at Plana -- over 60 percent of the workforce at the 1-year-old startup hold master’s or doctoral degrees, according to the firm.

“We have great talents joining our team which is rapidly growing. Over 20 engineers currently work with us, whose backgrounds all vary but have one same thing -- passion for what they want to do in this field,” said Kim, adding that his colleagues have come from countries like France, India, Turkey, Australia, Japan, the US and UAE.

Kim said he spends most of his time looking for talents, whether through LinkedIn or those who approach Plana via email or on social media.

“We really look for candidates who not only have technical skills but also people skills -- we want those with passion and leadership,” he said.

“Those who work together from the very early stages of a company really matter. They really shape the company culture and form the atmosphere at work to increase work efficiency. We do not want to spend more money in replacing the workforce.”

This is the third installment of a series of articles and interviews exploring the world of urban air mobility and the people behind the latest technological advancements. --Ed.