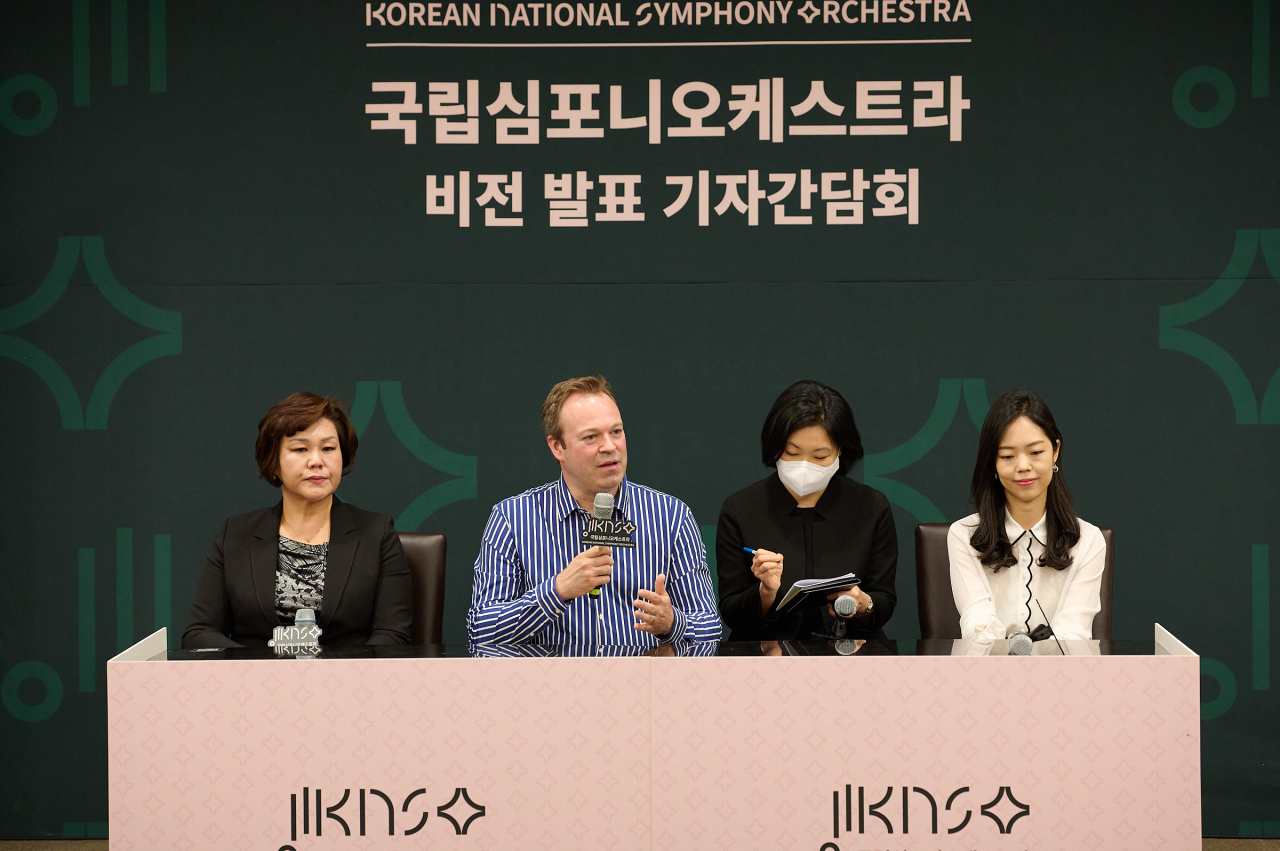 From introducing forgotten female composers to crossing over beyond classical music into K-culture, the Korean National Symphony Orchestra unveiled plans to impress its name on the minds of music lovers at home and abroad.

The orchestra’s artistic director David Reiland introduced various artistic plans and initiatives to reporters during a press conference at Seoul Arts Center on Tuesday. Reiland plans to help discover forgotten female composers, a continuation of a project with France’s National Orchestra of Metz, which Reiland has been leading as music and artistic director since 2018.

“There are many female composers, but we barely listen to their music just because they have female names. I’d like to give a chance to a lot of female composers,” Reiland said. “I discovered there were more than 15 composers in Europe who studied with Yun I-sang.”

The Belgian conductor, who was appointed the artistic director of the KNSO in January this year, said that his goal is to bring classical music to all generations. To achieve that goal, he hopes to collaborate with various genres, and K-culture in particular.

Reiland is mulling various ideas to cross over into genres such as K-pop and K-drama. Some of these ideas include mixing classical music with Korean literature and “live painting,” combining exhibitions with music, Reiland explained.

The revamp plan also includes a new year-long deputy conductor position and a revival of the composer-in-residence program which was suspended for the last five years.

The orchestra has appointed US conductor Elias Peter Brown as deputy conductor and Chun Yie-eun as composer-in-residence.

Chun Yie-eun, who Reiland described as “a composer who creates creative originality within musical tradition,” will be KNSO’s composer-in-residence for the next two years, during which she will create two new pieces.

The KNSO will introduce at least three new pieces by Korean composers each year while collaborating with world-renowned music organizations.

The orchestra, which gets 7 percent of its annual budget from the Culture Ministry, also introduced measures to boost its operations.

Choi Jung-sook, the CEO of KNSO, announced a list of new initiatives, including adding more musicians to the orchestra and releasing more recordings.

The orchestra, which currently has 74 members, will add more musicians over the next three years.

“The budget issue is very important and we’re currently in talks with the Ministry of Culture, Sports and Tourism and the Ministry of Economy and Finance to secure the necessary budget,” Choi said. “We also plan to diversify budget sources by expanding our sponsorship member base in addition to corporate sponsorships,” she added.

In March, the KNSO, previously known as the Korean Symphony Orchestra, officially added “National” to its name.