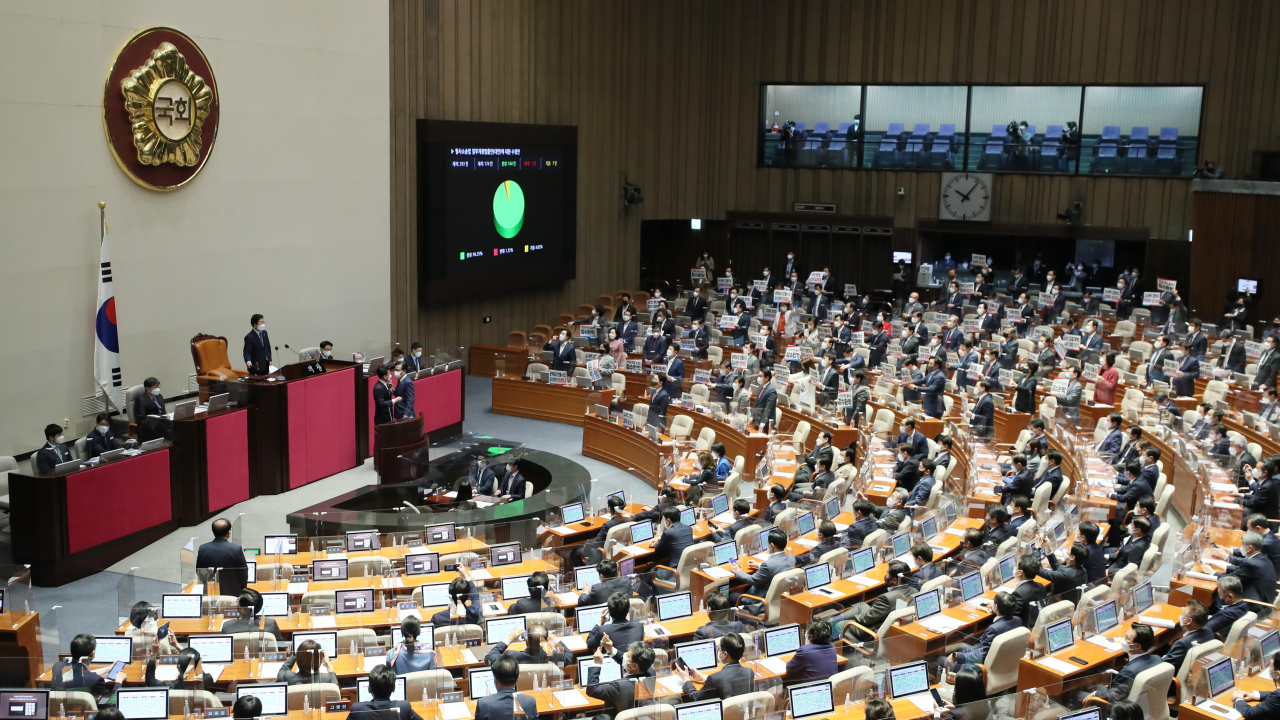 Lawmakers pass a revision to the Criminal Procedure Act, the remaining half of the ruling Democratic Party's prosecution reform legislation, at a plenary session at the National Assembly in Seoul on Tuesday. (Yonhap)

The ruling Democratic Party railroaded the last-remaining bill on prosecution reform through the National Assembly amid opposition protest Tuesday, completing its push to reduce and ultimately remove the prosecution's investigative powers.

The revision to the Criminal Procedure Act, the remaining half of the ruling DP's prosecution reform legislation, was passed in a 164-3 vote, with seven abstentions in just three minutes after the opening of a parliamentary plenary session.

The revision calls for limiting the scope of the prosecution's supplementary investigations.

PPP lawmakers attended the session but boycotted the vote in protest.

The move follows Saturday's passage of the revision to the Prosecutors' Office Act that reduces the prosecution's investigative powers to only two crime types -- corruption and economic crimes -- from the current six, before removing them completely.

President Moon Jae-in planned to hold a Cabinet meeting at 4 p.m. to promulgate the legislation into law. The session had originally been scheduled for 10 a.m. but was pushed back until after the parliamentary passage of the bill.

The DP, which holds 171 out of 300 seats, has been trying to pass the two bills and get them signed into law before the May 10 inauguration of President-elect Yoon Suk-yeol, because Yoon would be expected to veto the bills.

The rival parties have been wrangling for weeks over the bills as the DP has insisted they are necessary to ensure the prosecution does not abuse its investigative powers for political purposes, while the PPP has countered they will leave the people with fewer means to seek justice for crimes.

The two sides reached a compromise deal under which the prosecution's investigative powers would be reduced from six crime types to two before being removed completely, but the PPP backtracked following criticism that lawmakers colluded to shield themselves from prosecution investigations as the agreement calls for striping the prosecution of its right to investigate election crimes.