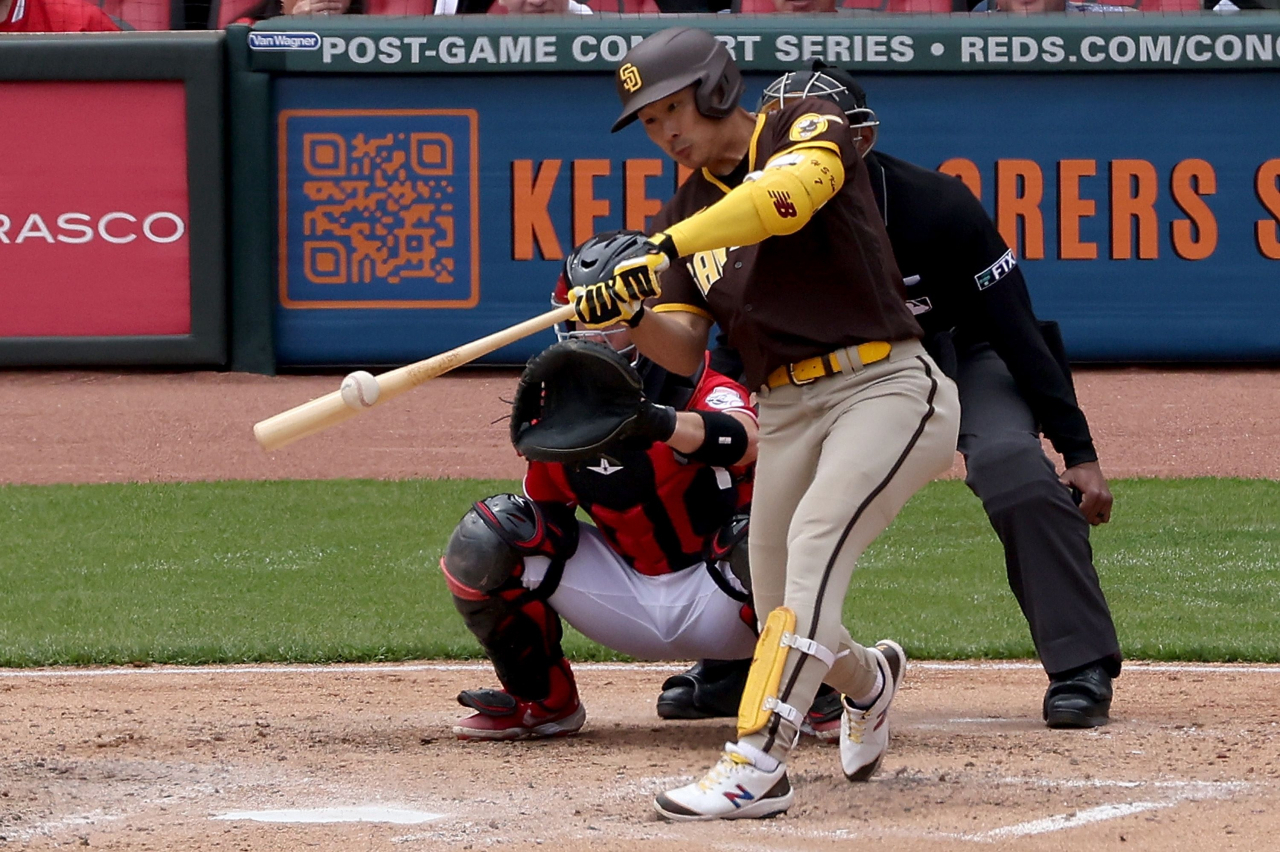 In this Getty Images photo, Kim Ha-seong of the San Diego Padres hits a double against the Cincinnati Reds during the top of the sixth inning of a Major League Baseball regular season game at Great American Ball Park in Cincinnati last Thursday. (Getty Images)

Four South Korean players were on Opening Day rosters for their respective clubs in April. But with the first month of the 2022 Major League Baseball (MLB) season in the books, only one of them is active in the bigs at the moment: Kim Ha-seong, the second-year infielder for the San Diego Padres.

Kim, meanwhile, has been chugging along. He closed April on a season-high four-game hitting streak. By batting 7-for-15 in that stretch, Kim raised his batting average from .182 to .271.

A 0-for-4 performance on Sunday against the Pirates brought that number down to .250. But his on-base plus slugging percentage (OPS) remains a respectable .858.

Kim has been thriving in one other metric: OPS+, which normalizes a player's OPS by adjusting for external variables such as ballparks. It is scaled to 100 as league average, and each point up or down is one percentage point above or below league average.

Kim's OPS+ through Sunday's action was 158, meaning his OPS has been 58 percent better than league average. Last year, Kim posed a 73 OPS+.

The recent hitting streak featured Kim's first three doubles of the season, and two of his three home runs so far. Kim knocked in seven runs in those four games after driving in just three runs in his previous dozen games.

Kim had been one of the top offensive shortstops in the Korea Baseball Organization (KBO) before signing with the Padres on New Year's Eve in 2020. Given the discrepancy in quality of pitchers in the two leagues, Kim may never be the 30-homer slugger in the majors that he once was in South Korea.

But Kim has at least cut down on his swings-and-misses and has been making harder contact more frequently than in 2021. Kim is also striking out less and walking more.

The term "barrels" applies to well-struck balls where the combination of exit velocity and launch angle leads to a minimum .500 batting average and 1.500 slugging percentage.

This is a significant jump for Kim, even though it has come in a small sample. Other metrics show how Kim has been able to improve his barrel numbers.

Per FanGraphs, Kim has cut down on his groundball percentage from 41.4 percent to 27.5 percent. In a corresponding trend, Kim is hitting more line drives (from 17.2 percent last year to 20 percent this year) and more flyballs (from 41.4 percent to 52.5 percent). These figures indicate that Kim, compared to 2021, is less likely to bounce into outs and more likely to drive the ball into the outfield, thus giving himself more chances to pick up extra-base hits.

While handling shortstop, third base and second base last year, Kim was one of the most valuable defenders in baseball. Baseball Reference credited him with 2.1 in defensive wins above replacement (dWAR), the third-best mark in the National League.

Kim has a -0.1 dWAR this year, a figure that will surely rise as the season progresses. He has made some solid plays on the left side of the infield -- he has yet to appear at second base this year while getting 13 starts at shortstop and two at the hot corner -- and Kim's athleticism has translated well to the majors.

Ryu, who threw to live batters on Saturday, will have a rehab assignment in Triple A on Saturday before rejoining the Blue Jays. Since the second half of last year, Ryu has been the shell of his Cy Young-contending former self. In two starts this year before hitting the IL, Ryu was rocked for 11 runs on 11 hits, including two home runs, in only 7 1/3 innings. Ryu began the season as No. 3 starter but he has fallen even further in Toronto's starting pitching hierarchy, with Jose Berrios, Kevin Gausman and Alek Manoah all pitching well so far.

Choi's elbow injury couldn't have come at a worse time. He sat out for four consecutive days before landing on the IL, with the move retroactive to last Thursday. Choi was sporting a .357/.491/.595 line in 15 games with a pair of home runs and 10 RBIs.

Park made the Opening Day roster for the first time in his career but appeared in only five of the Pirates' first 13 games. In 15 plate appearances, Park batted just .214/.267/.286 with no homer and two RBIs.

He hasn't exactly set Triple-A on fire, with an underwhelming .182/.333/.318 line across six games. While Park brings defensive versatility, with games at second base, shortstop and right field this year, he will have to start hitting at some point to earn a trip back to the big show.

Hitting hasn't been a problem in recent days for Kim, who should continue go get extensive looks at either shortstop or third base, especially with the regular shortstop, Fernando Tatis Jr., out for weeks with a wrist injury. (Yonhap)