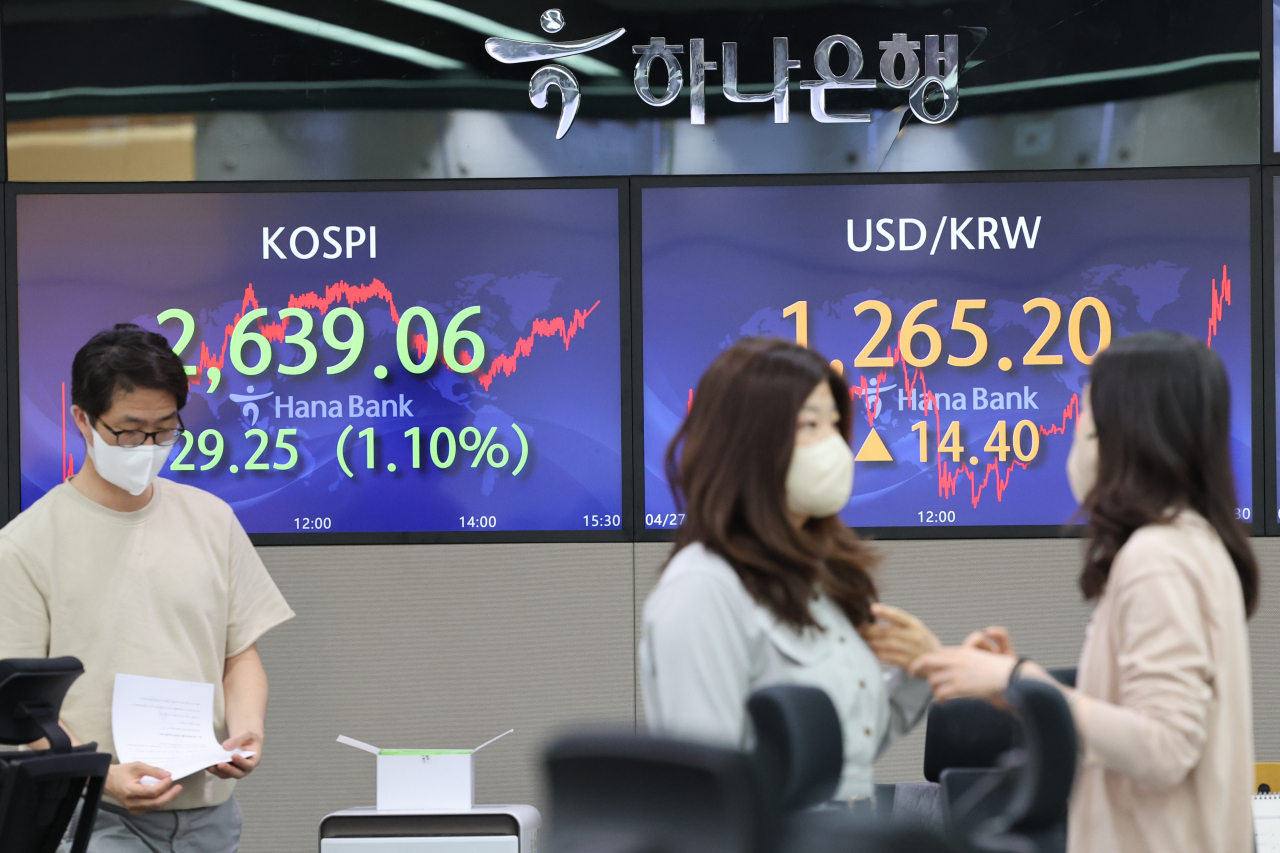 The photo shows information about the KOSPI (L), South Korea's main stock index, and the won on screens at a Hana Bank branch in central Seoul on Wednesday. (Yonhap)
South Korea's top economic policymaker said Thursday the government plans to take measures to stabilize the foreign exchange market, if needed, as the Korean currency has fallen against the US dollar at a fast pace.

Finance Minister Hong Nam-ki made the verbal intervention as the Korean currency hit an over two-year low against the greenback Wednesday amid heightened external economic uncertainty.

"The government is closely monitoring the FX market in a bid to curb (the won's) excessive one-sided movements, and it plans to make efforts to stabilize the market, if needed," he said.

The local currency ended at 1,265.20 won against the greenback, down 14.4 won from Tuesday's close. It marked the first time in more than two years that the won slid to the 1,260 won level.

The won further weakened against the dollar Thursday, but its pace markedly slowed after Hong made the remarks.

The won's weakness came as demand for the dollar was fueled by expectations for the Federal Reserve's aggressive monetary tightening, the fallout of China's COVID-19 lockdowns of its major cities and the Ukraine war.

Fed Chairman Jerome Powell signaled a 0.5 percentage-point rate hike in next week's policy meeting as US inflation jumped to a 41-year high in March. Last month, the US central bank raised the policy rate by a quarter percentage point to 0.25-0.5 percent, the first rate hike since 2018.

The Korean currency has fallen some 6 percent per the dollar so far this year. The won slid around 2 percent against the dollar in the latest three sessions alone.

The Bank of Korea and the finance ministry have disclosed quarterly figures on net selling or buying of dollars in the foreign exchange market since the third quarter of 2019.

South Korea's consumer prices grew 4.1 percent in March from a year earlier, the fastest on-year gain in more than 10 years, amid soaring energy prices caused by Russia's war with Ukraine. The Bank of Korea aims to keep annual inflation at 2 percent over the medium term.

The International Monetary Fund recently lowered its 2022 growth outlook for the South Korean economy to 2.5 percent, while raising its inflation projection to 4 percent. (Yonhap)