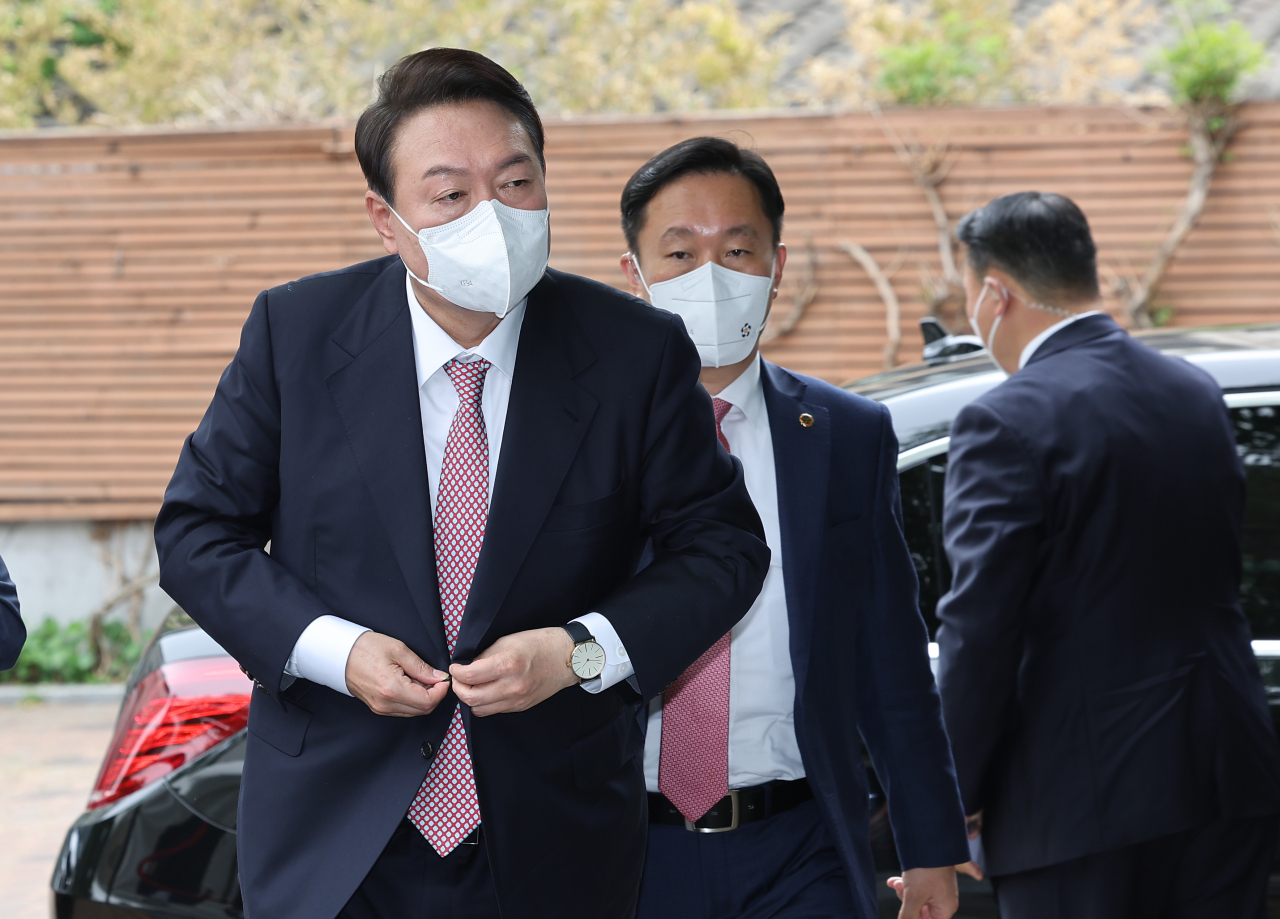 President-elect Yoon Suk-yeol walks into the presidential transition committee`s office in Jongno-gu, central Seoul, on Monday. (Yonhap)
Controversy over the move to reduce the prosecution’s investigative authority continued Monday, with both the president and president-elect chiming in on the issue.

President-elect Yoon Suk-yeol on Monday broke his silence over the controversial prosecution reform bill, asking the political community to “deeply reflect” on what is needed for the people, as the prosecution continues to vocally oppose the ruling party’s move to strip them of their investigative powers.

Rep. Bae Hyun-jin, spokesperson for the president-elect, in a press briefing Monday quoted Yoon, who said “no politics can prevail over the people.”

“President-elect Yoon urged the entire political community to deeply consider the ways to protect the values of the Constitution and the lives of the people, and pool their wisdom,” Bae said.

“We believe that the gigantic ruling party will not arbitrarily push for enactment while the people voice concerns,” the spokesperson added.

President Moon Jae-in, meanwhile, expressed general support for the move, saying that the proposed bill is moving in the direction his administration has pushed for.

“You will be well aware of my position that it is desirable (for the prosecution) to separate the right to investigate and indict,” Moon said in his last press meeting at Cheong Wa Dae in the afternoon, and added that the “government has been working in that direction.”

In this regard, he believes the agreement between the ruling and opposition parties, which was mediated by National Assembly Speaker Park Byeong-seug, “went well.”

Moon said he is fully aware of the prosecution‘s internal backlash.

“There may be complaints about it because its authority is reduced. And I think (they) can worry about the inconvenience that such a phenomenon causes to the people,” he said. “However, even under the agreement, the prosecution will have the right to investigate corruption and economic investigations, which it has been good at.”

Should a serious crime investigation agency be established, “the prosecution will be able to fully utilize the investigative capabilities of prosecutors and investigators,” Moon said.

Yoon’s earlier remarks, his first over the issue, are effectively seen as opposition to the compromise reached between the conservative People Power Party and its rival Democratic Party of Korea.

The agreement was to push a bill that would reduce the prosecution’s investigative powers for corruption and economic crimes before a complete removal 18 months later. Bae said Yoon has kept abreast of discussions unfolding at the National Assembly.

The Democratic Party, controlling over 170 lawmaker seats out of 300 in the National Assembly, has been pushing to pass a bill that would completely strip the prosecution’s investigative powers, which has often faced criticism of abusing its power and authority for political purposes.

The legislative move has been met with fierce opposition from almost all related sectors as well as the People Power Party, which essentially had no option but to stage a filibuster to block the bill from enactment. Public sentiment toward the bill has also been negative, which prompted politicians across the board to reach a compromise Friday.

National Assembly Speaker Park Byeong-seug brokered a deal between the two parties and defused tensions over the controversial bill, but criticism still festered from in and out of the political circle, as it would still involve ridding the prosecution of its investigative powers.

Many in the judiciary denounced politicians for essentially finding a means to free themselves of scrutiny and investigations in the future. This prompted the People Power Party to officially announce it would break away from the Friday compromise and start over the discussion process.

Lee Jun-seok, chairman of the People Power Party, on Monday suggested lawmakers hold a public hearing on the prosecution reform bill, saying that many worry the compromise lacks details on who can investigate crimes on elections and those concerning public figures.

“To pass laws that are demanded by the people, it would be best to reveal as much information as possible to the people and open discussions than holding negotiations within time limits and putting others under pressure,” Lee said in a senior party official meeting Monday.

Going against public sentiment is detrimental for parties preparing for local elections in June. According to People Power Party’s internal analysis, around 70 percent of the public was discontent with the compromise reached between the rival parties.

The Democratic Party immediately denounced the People Power Party for breaking the compromise, threatening that the liberal party will push for enactment of its original draft of the bill if the conservative party officially breaks the agreement.

“The Democratic Party of Korea will not allow any attempts from the People Power Party to nullify the compromise reached between the rival parties,” Rep. Yun Ho-jung, head of the emergency steering committee for the Democratic Party, said in a meeting Monday.

“If the People Power Party breaks the compromise, we will immediately work to pass the prosecution reform bill (by ourselves) at the National Assembly.”

The prosecution has fiercely opposed the bill, with its senior leaders expressing intent to resign over the “unconstitutional moves” occurring inside the political domain.

Prosecutor General Kim Oh-soo again offered to resign Friday after the rival parties announced the compromise, and so did the chiefs of all six high prosecutors’ offices across the country. President Moon Jae-in was expected to officially sign off on Kim’s resignation soon.

In a meeting with reporters Monday, Kim reiterated his objection to the bipartisan proposal, arguing the compromise is only a delay to the “unconstitutional” abolition of the prosecution’s investigative powers. The chief prosecutor emphasized he was not informed of the compromise beforehand.

Kim asked Moon and the National Assembly to form a special committee to hold discussions on the criminal justice system by involving those from rival parties and all related sectors. He added that his offer to resign was to take responsibility and express views as the head of the prosecution even if he has time left to serve in the role.

Shin Ji-hye contributed to this article.