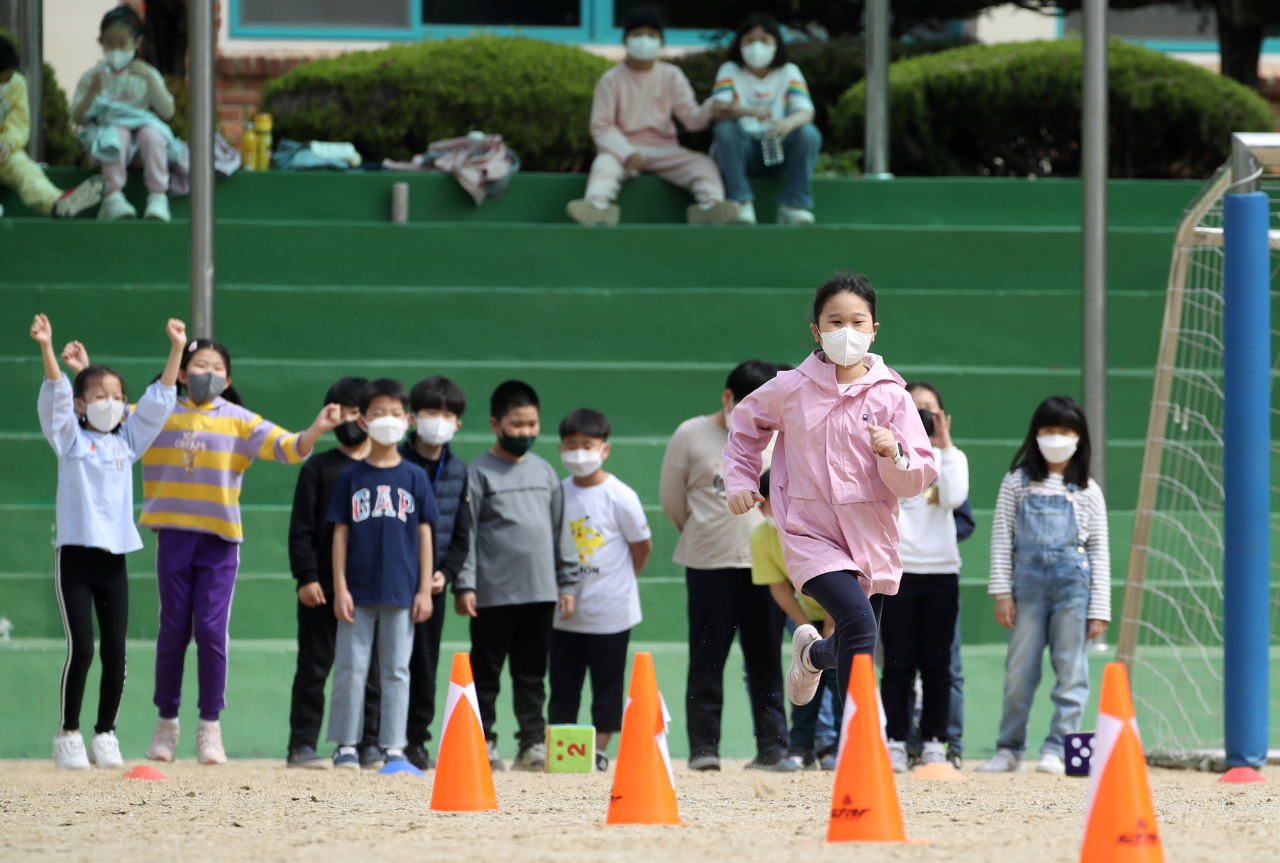 Students take part in a sports day event held at an elementary school in Gwangju, Monday. (Yonhap)
The number of COVID-19 cases among students and kindergarteners showed a 40 percent week-on-week drop, Seoul’s education authority said Tuesday, as schools prepare to return to normal with the attendance rate for schools in Seoul nearing 100 percent.

According to the Seoul Metropolitan Office of Education on Tuesday, 16,814 kindergarteners, elementary, middle and high school students contracted COVID-19 in April 11-17, marking a 40.8 percent drop from 28,366 from the week before.

The number of students who contracted the virus has been on a continuous decline since the fourth week of March. It is the first time for the figure to drop below 20,000 since the semester began in March.

As the numbers fall, more schools are having students attend class face-to-face.

As of Monday, 96.3 percent of kindergartens and elementary, middle and high schools in Seoul are holding fully offline classes, marking a 1.7 percent-point increase from the week before.

All 767 kindergartens across Seoul reported they are not holding online classes. Only two high schools reported that they have gone completely online with their classes.

Schools, however, need to gain more than 70 percent consent rate from parents to arrange such group events.

Though the Education Ministry’s recommended once-a-week self-testing routine is set to run until the end of April, the Seoul Metropolitan Office of Education plans to give out antigen rapid testing kits to use in contingency. It will provide 1.35 million kits to schools to be used for six weeks.

It will also expand the mobile polymerase chain reaction test lab system. While mobile testing booths have been installed at schools with high-risk groups such as kindergartens, special-education schools and schools with dormitories, the education center will dispatch mobile labs to schools with group events scheduled such as field trips and excursions to prevent the spread of the disease.

Meanwhile, the country has passed the peak of its worst wave yet of COVID-19.

According to the Korea Disease Control and Prevention Agency, the country saw 118,504 new COVID-19 infections in the 24 hours of Monday, raising the total caseload to 16,471,940.

The nation’s disease control authorities, however, maintained the risk level of the pandemic in the country to be “high,” the fourth-highest level in the five-tier system.

Though the number of daily confirmed people and deaths have decreased, the figures are still significant, authorities said.

The risk level outside of the capital went down a notch to “high” from the “very high” level it was at last week.