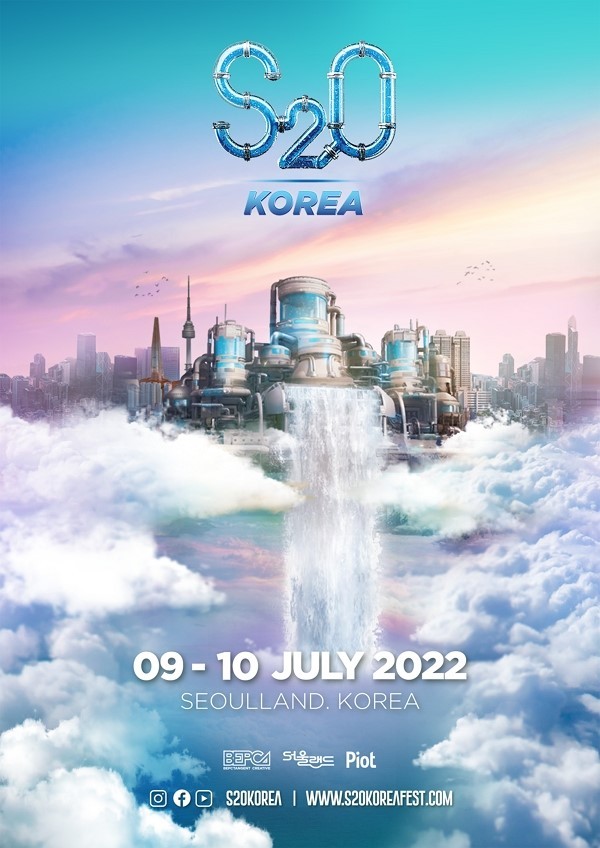 Poster image of S2O Korea (BEPCTangent Creative)
Songkran Music Festival will be held in Korea for the first time in July, fighting off the summer heat with water and heart-thumping music, according to the festival organizer BEPCTangent Creative on Tuesday.

S2O Korea will take place at Seoul Land in Gwacheon, about 20 kilometers south of Seoul, on July 9 and 10. It will feature top electronic dance musicians while 1 million liters of water is dumped on the audience, the organizer said.

Songkran Music Festival has its roots in Songkran, a 10-day water festival that coincides with the Thai New Year’s festival. Around 300,000 people attended the annual festival each year when it was held in Thailand and Japan in 2019 and in Taiwan in 2020.

BEPCTangent Creative which organizes a number of festivals in Korea, including World DJ Festival and Heineken Presents Stadium, holds the right to host the Songkran Music Festival in Korea.

The event was originally planned for 2020 but was delayed due to the COVID-19 pandemic. It is likely to be the first large-scale EDM festival to take place in Korea since the virus crisis began, the organizer said.

Ticket bookings, the line-up of performers and the festival schedule will be announced through S2O Korea’s official website, social media and YouTube channel.