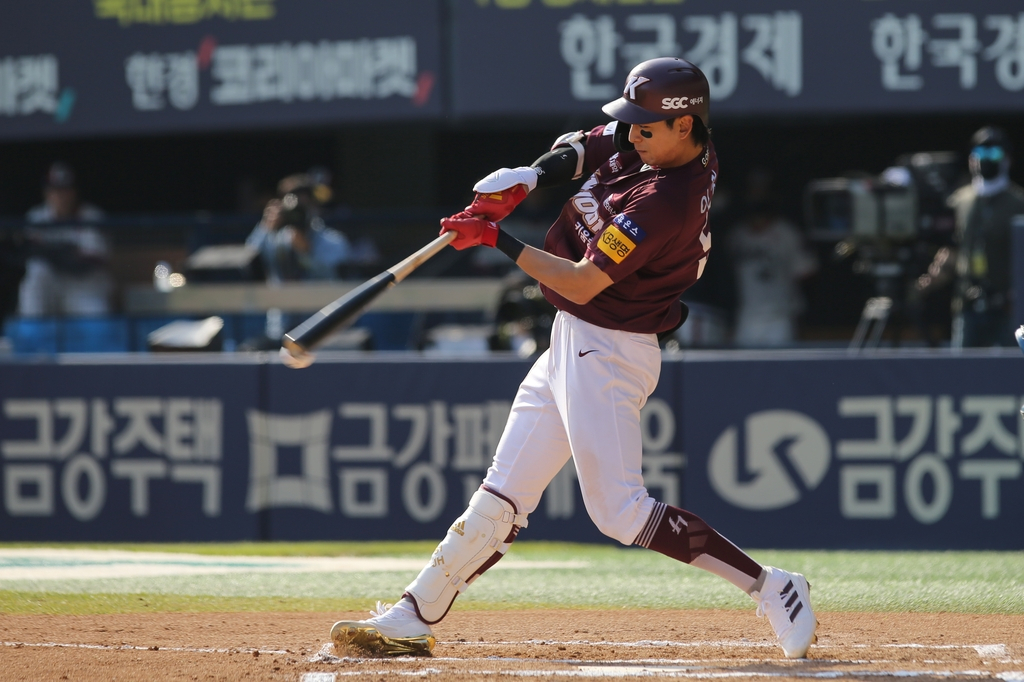 Lee Jung-hoo of the Kiwoom Heroes hits a single against the Doosan Bears during the top of the fifth inning of a Korea Baseball Organization regular season game at Jamsil Baseball Stadium in Seoul on Sunday, in this photo provided by the Heroes. (The Heroes)

Lee Jung-hoo is going where few others have gone before in South Korean baseball, breaking records, including one held by his father, along the way.

And now Lee is on the verge of becoming the career batting average leader in Korea Baseball Organization (KBO) history.

Lee, the veritable hitting machine for the Kiwoom Heroes, collected his 900th career hit against the Doosan Bears on Sunday. It came in his 670th game, making him the fastest to get to the 900-hit milestone. Lee's legendary father, Lee Jong-beom, had owned the previous mark with 698 games.

The junior Lee also became the youngest with 900 hits at 23 years, seven months and 28 days old. Lee Seung-yuop, another retired legend, had held the previous record at 24 years, nine months and 13 days.

Lee Jung-hoo had earlier become the fastest and youngest to 500 hits. With 17 hits in 14 games this year, he is now on track to also reach the 1,000-hit plateau in the fewest games and at the youngest age.

"This is just a part of the process on my way to my 1,000th hit," Lee Jung-hoo said, in his typically understated fashion. "I am trying to improve at the plate."

It's difficult to see where improvements may come from, other than the rather uncharacteristic .298 batting average for the career .340 hitter. Lee, who debuted in 2017 out of high school, has never finished a season hitting below .324, and the current batting average will certainly tick back up to his career norm as the season progresses.

But Lee won't even have to get a hit in his next three plate appearances to officially become the league's lifetime batting average leader.

The minimum number of plate appearances required for the KBO's career batting average ranking is 3,000. Lee sits only three trips to the plate shy of that mark. Even if he goes hitless in his next three plate appearances, Lee will still have a .339 career average, which will then be the highest mark.

The late outfielder Jang Hyo-jo is the current leader with a .331 lifetime average. During his 10-year career that began in 1983, Jang won four batting titles, including three straight from 1985 to 1987. He finished in the top 10 on four other occasions.

Three active players, all members of the NC Dinos, currently trail Jang: Park Min-woo (.326), Park Kun-woo (.326) and Son Ah-seop (.324). Lee doesn't have nearly as many plate appearances as the veteran trio, though it shouldn't diminish the impact Lee has already made in his early 20s.

Lee, 23, captured his first batting title last year, making him and his father the first father-son batting champ duo in league history. The son also finished in the top 10 in every season from 2018 to 2020. As a rookie in 2017, Lee batted a robust .324 but ranked 13th in an offense-happy season.

A key reason why Lee Jung-hoo has been collecting hits at a record pace is that he puts so many balls in play, thus giving himself a chance that a few may find holes through the infield or drop in no-man's land for some fortuitous hits.

Lee has been the toughest batter to strike out this season. He has only struck out once in 64 trips to the plate. The mind-boggling rate may not be sustainable over a 144-game season, though one would be foolish to put that past Lee.

For this season, he has a strikeout rate -- strikeouts divided by plate appearances -- of 1.6 percent. Kim Hun-gon of the Samsung Lions is a distant second at 5.8 percent.

Since his debut in 2017, Lee has an 8.3 percent strikeout rate, tied for the lowest in the league.

The record for the fewest strikeouts in a season for qualified hitters is eight, by Kim Il-kwon for the Taepyungyang Dolphins in 1988. He had 343 plate appearances over 89 games in a 108-game season, barely over the minimum to qualify.

With Lee doing his thing at the plate, the Heroes have jumped out to a 9-5 record, good for third place. Pundits didn't give the Heroes much of a chance to contend for a postseason berth this year, but Lee said he doesn't understand such pessimistic outlooks.

"From the outside, we may not seem like a strong team. But our guys have the 'next man up' mentality here, and we're all trying to keep getting better and better," said Lee, whose team recently enjoyed a seven-game winning streak. "We've been playing well because we haven't been caught up in what people are saying about us, and we've been focusing on what we have to do." (Yonhap)