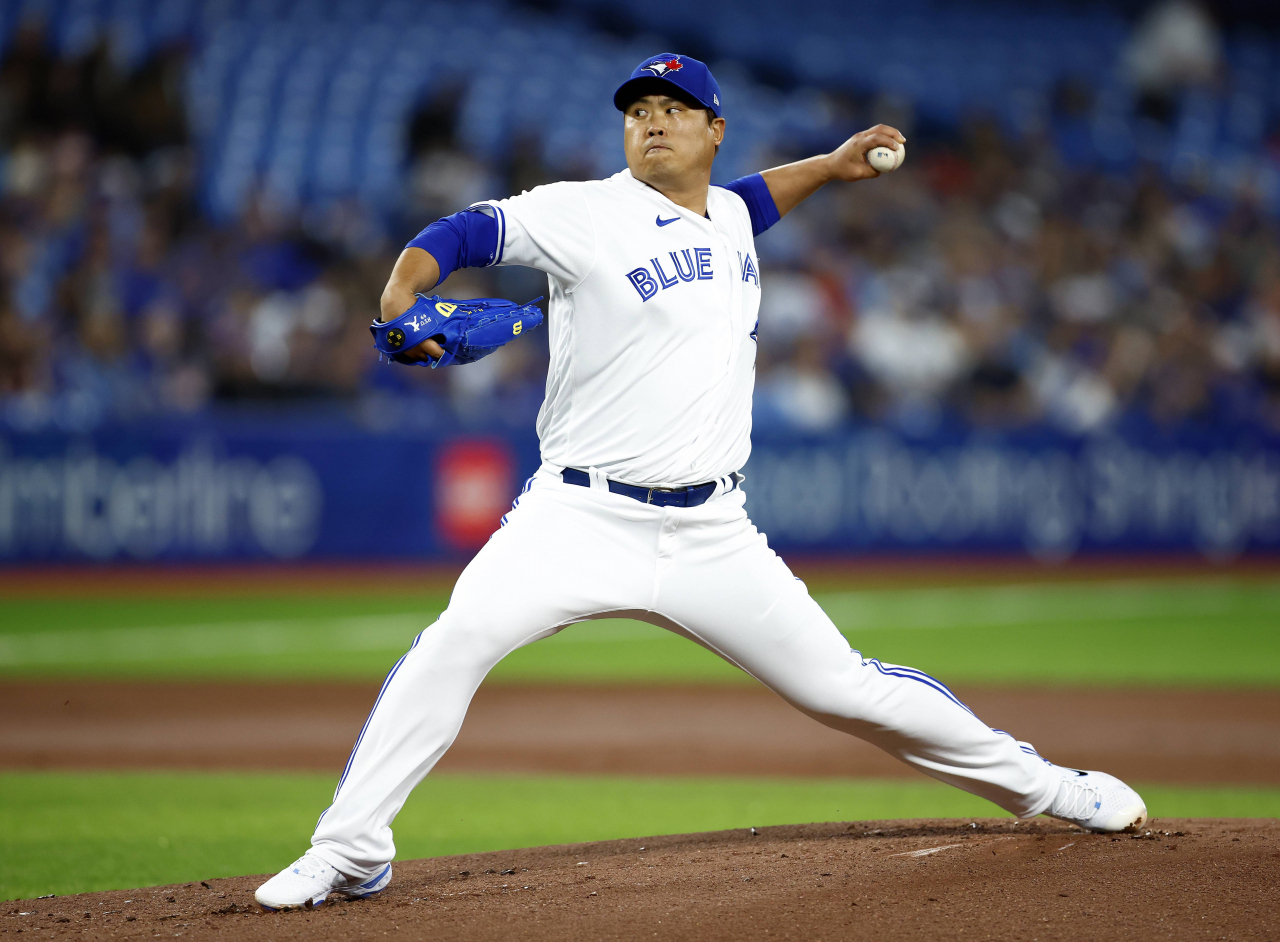 In this Getty Images photo, Ryu Hyun-jin of the Toronto Blue Jays pitches against the Texas Rangers in the top of the first inning of a Major League Baseball regular season game at Rogers Centre in Toronto on Apr. 10. (Getty Images)

The Blue Jays made the move before hosting the Oakland Athletics for the final game of a three-game set in Toronto on Sunday (local time).

Ryu had started Saturday's game against the A's at Rogers Centre and gave up five earned runs on six hits in four innings in a 7-5 Toronto loss. The left-hander, who left the game with a 5-1 deficit, got a no-decision as the Blue Jays tied things up at 5-5 later, only to give up two runs in the top of the ninth.

Ryu reported soreness in his left forearm after the game and received treatment right away. He pitched in the bullpen and had MRI testing Sunday morning before landing on the IL.

Though the arm problem was not the reason why manager Charlie Montoyo took Ryu out of Saturday's game, it at least seems to explain noticeable dips in velocity and poor command of his pitches across the board.

Because Ryu is a finesse pitcher thriving on pitch sequencing and locations, the margin for error is slim without overpowering stuff. That problem has been exacerbated in his last dozen outings, with Ryu losing zip on his fastball and failing to work the corners effectively.

The oft-injured Ryu had previously been on the IL some several occasions since making his major league debut with the Los Angeles Dodgers in 2013. He missed the entire 2015 season after undergoing a shoulder operation and then pitched just once in 2016 because of elbow issues.

Ryu, 35, has also been on the sidelines with injuries ranging from a hip contusion and a groin strain to neck soreness and a glute strain.

Ryu has struggled out of the gate in 2022, unable to reverse a downward trend that began last summer and to recapture the form that saw him battle for the Cy Young Award in each league in 2019 and 2020.

In his 2022 debut on April 10, Ryu was touched up for six earned runs on five hits and two walks in 3 1/3 innings against the Texas Rangers.

Ryu has the worst ERA in the majors with 8.27 since Aug. 8 last year, when he surrendered seven earned runs on 10 hits in 3 2/3 frames versus the Boston Red Sox.