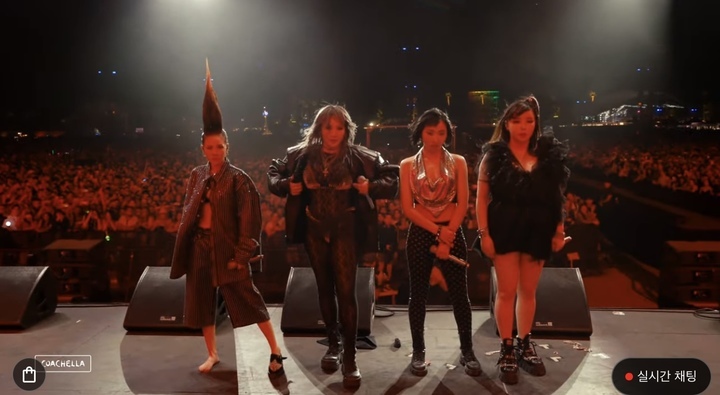 2NE1 reunites to perform “I Am the Best” at the Coachella Valley Music and Arts Festival in California, Saturday. (Capture from Coachella 2022 LIVE Channel 1’s YouTube channel)
Disbanded girl group 2NE1 surprised music fans by reuniting to perform at Coachella music festival in the US as a four-member act for the first time since disbanding six years ago.

The reunion took place on the main stage at the Coachella Valley Music and Arts Festival, which was held in Indio, California, Saturday.

Following a mini solo set by former leader CL, the former bandmates -- CL, Sandara Park, Park Bom and Minzy -- teamed up to perform “I Am the Best,” released in 2011.

The performance was livestreamed via Coachella’s official YouTube channel.

It marked the first time for the band to perform as a four-piece act since its last performance at the 2015 Mnet Asian Music Awards in Hong Kong.

After its debut in May 2009 with the single “Fire,” 2NE1 enjoyed popularity at home and abroad, and is best known for its hip-hop-influenced sound and powerful stage presence.

In November 2016, 2NE1 officially disbanded following Minzy’s departure. The girl group released its final single “Goodbye” as a trio in January 2017 as a farewell to its fans.

CL was invited to perform at this year’s Coachella, where she performed solo singles, including “Spicy” and “Chuck,” from her 2021 album “Alpha” and “Hello Bitches,” released in 2015.

While the reunion performance took place at CL’s suggestion, it is unknown whether the now-disbanded group will return as a four-member act.