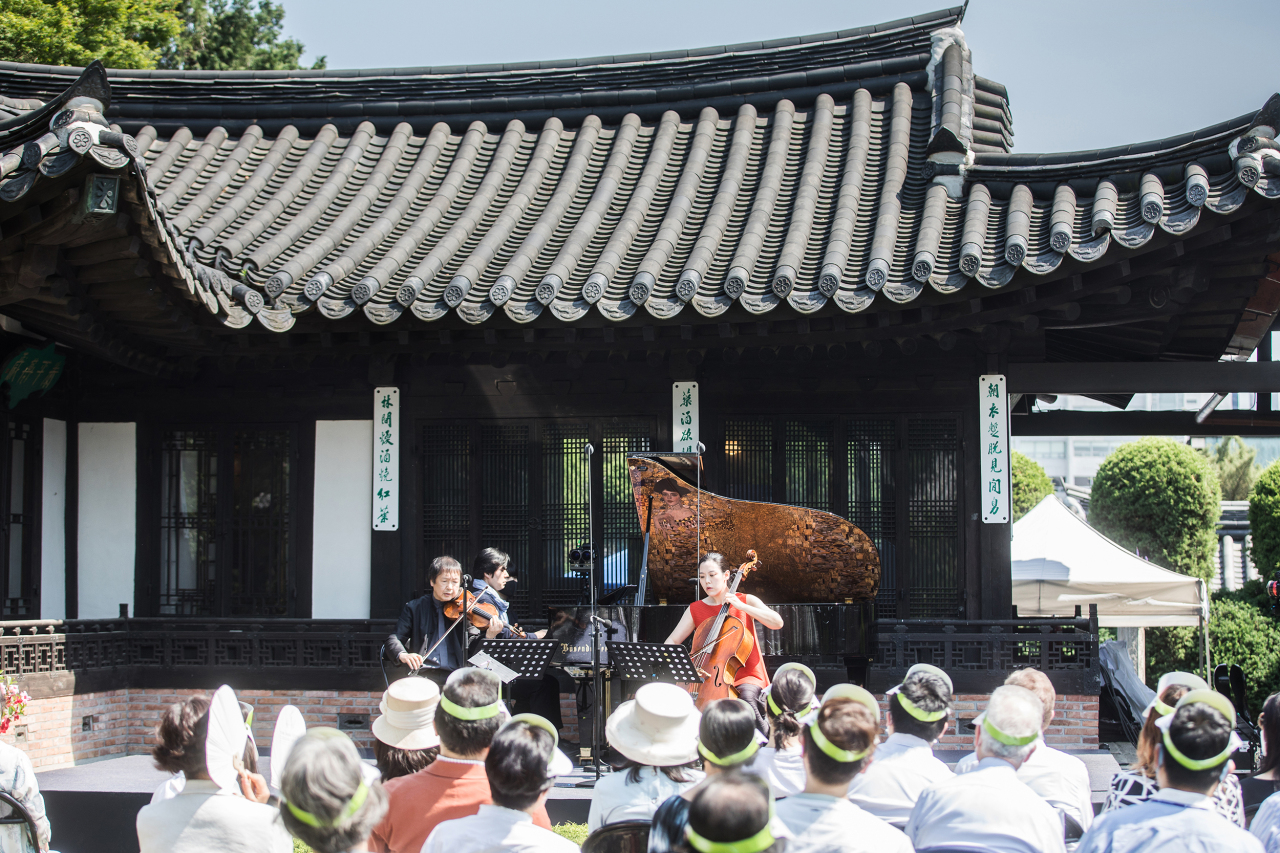 Musicians perform at the Yun Po-sun House during the Seoul Spring Festival of Chamber Music in 2021. (SSF)

A long-running chamber music festival led by violinist Kang Dong-suk is set to return next week with a focus on cello.

Titled “Cellissimo!,” the 17th edition of the festival will delve into the beauty of the four-string instrument that originated in Italy in the 1600s.

This is the third time the festival is focusing on a particular instrument: In 2011, the piano took center stage followed by the violin in 2012.

“Cello is one of the most popular instruments and cellists are great team players, which is why there are so many cello festivals or teams,” the festival’s artistic director Kang told reporters during an interview on Tuesday.

Kang has been leading the festival since its founding in 2006 when chamber music was unfamiliar to the public.

“When the festival kicked off, there was almost no chamber music festival in South Korea. The 17 years have gone by unbelievably fast,” Kang said.

Kang remembered the difficulties in securing funding and attracting concertgoers in the early days but noted that things have changed.

“In the past two and three years in particular, a growing number of people have shown interest in spite of the COVID-19 pandemic. A ticket sellout was unimaginable in the beginning,” Kang said. Tickets were all sold out at one of last year’s concerts at the house of former President Yun Po-sun. Returning by popular demand, the organizer has programmed an additional concert at the Yun Po-sun House for this year.

From April 22 to May 4, the festival will take place at three places in Seoul -- Sejong Chamber Hall, IBK Chamber Hall of Seoul Arts Center and the Yun Po-sun House.

A total of 13 performances by 51 groups from Korea and abroad will take place during the 13-day festival. Among the groups are an ensemble of nine cellists, Novus Quartet and Layers Classic.

On May 1, five cellists are set to take to the stage in a concert designed for the whole family.

The festival will wrap up May 4 at Seoul Arts Center with a program of Barber’s Suite for Piano 4 Hands, Op. 28 “Souvenirs,” Beethoven’s Quintet for Piano and Winds in E-flat Major, Op. 16 and Tchaikovsky’s String Sextet in D minor, Op. 70 “Souvenir de Florence.”

The ticket prices range from 20,000 won to 70,000 won for the seats at Seoul Arts Center and Sejong Chamber Hall and 150,000 won for each of the three concerts taking place at the Yun Po-sun House.

Meanwhile, the organizer said it will show support for Ukraine by playing music by Ukrainian composers at the opening and finale concerts. It will also raise funds for Ukraine during the festival.

“Ukraine is suffering so much. Having gone through the Korean War, South Korea is no stranger to war. Ukraine has many great composers. From the beginning to the end, we will keep Ukraine in our hearts,” Kang said.