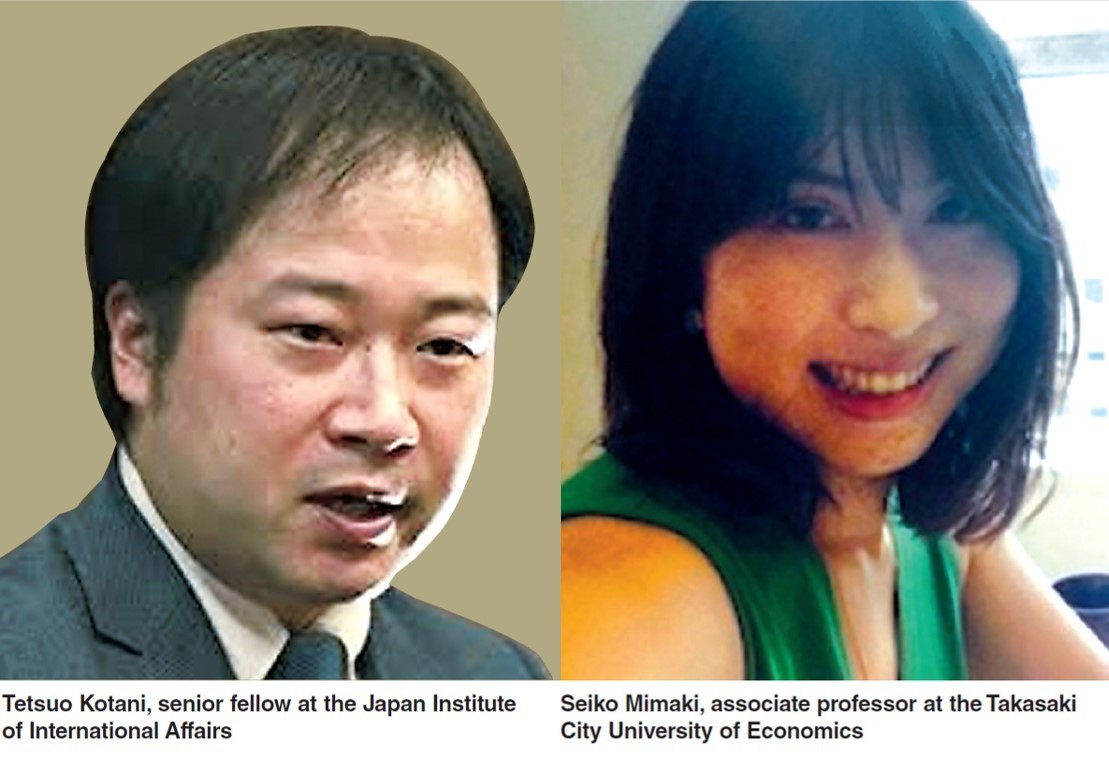 As the recent US-China competition intensifies, the strategic significance of the Indo-Pacific region is also rising. In this situation, major countries are presenting new Indo-Pacific Strategies with the purpose of strengthening their respective political, economic, and military influence in the Indo-Pacific region. The US Biden administration has set its Indo-Pacific vision as its main diplomatic policy in order to maintain the US’ influence within Asia and to check China’s growing influence. The European Union also announced a Joint Communication on the “EU Strategy for Cooperation in the Indo-Pacific” in 2021. Japan already drew the blueprint of its own Indo-Pacific Strategy back in 2006 under Abe’s first government, and showed its active willingness in the second. At the same time, Japan has shifted the term from “strategy” to “vision,” and seems unwilling to step to the very front line of the Indo-Pacific Strategy while it targets China. Recently, the Indo-Pacific Strategy is frequently read either as a vision or a regional strategy. What is Japan’s national strategy, particularly in regard to its Indo-Pacific Strategy? Also, what is its national strategy as the world goes through new geopolitical risks including the post-COVID era and the crisis in Ukraine? This week, the discourse invites three experts from Japan who are contributing significantly to answering these questions. We have Senior Fellow Tetsuo Kotani at the Japan Institute of International Affairs, and Associate Professor Seiko Mimaki at the Takasaki City University of Economics.


Hwang: What is the Indo-Pacific Strategy from Japan’s point of view?

Kotani: First of all, I would like to stress that the US Biden administration’s Indo-Pacific Strategy and Free and Open Indo-Pacific will remain as just regional strategies, not policies aimed at China. What both the US and Japan seek is to establish a desirable regional situation for ourselves, not to pressure or change China. While the Trump administration focused on weakening the system under the Chinese Communist Party through competing with China, the Biden administration is aiming to manage China through competition with the purpose of creating an ideal environment in the Indo-Pacific region. The US and Japan have come to a consensus on this approach. This approach includes strategies for expansion of regional economic cooperation and promotion of economic security. President Biden has emphasized the importance of universal values since the beginning for his administration, and his ideas are well reflected in the Indo-Pacific Strategy. However, when it comes to the overall Indo-Pacific area, the US weighs the balance of power over values. Therefore, I assume the US will steadily show how it strengthens cooperation with such states as Vietnam or Singapore that could not participate in the Summit for Democracy last year. Moreover, it will move on to intensifying the cooperation with ASEAN countries with the existing regional cooperation frames. These include the Quadrilateral Security Dialogue (Quad), the AUKUS pact, and others.


Hwang: I would like to ask you about Japan’s National Security Strategy.

Kotani: So far, Japan is considering revising the current National Security Strategy (NSS) which was formulated in 2013 by the end of this year. As the current NSS does not contain Indo-Pacific Strategy or FOIP, these flows will be newly added in the revised one. Also, Japan’s relations and positions with China and Russia will be altered. The existing one defines China and Russia as a significant partner in order to resolve the regional issues, nonetheless, they are likely to be changed into the competitor or threat rather than partners in the upcoming revision. Additionally, details about missile defense, striking capacities, expansion in deterrence will be added as well as the revision of regional frames and economic security.


Hwang: The importance of the Taiwan Strait is gradually growing in the US’ and Japan’s Indo-Pacific Strategy.

Kotani: The US and Japan are recognizing the significance of peace and stability of the Taiwan Strait in the strategic context of the Indo-Pacific. In this sense, US-Japan and US-Republic of Korea-Japan cooperation in the region are continuously underlined since last year. Not only the US, Japan and Korea, but also Australia and other European countries agree with the importance of peace and stability on the Taiwan Strait. Its value will be progressively highlighted from the economic security perspective due to semiconductors – of which Taiwan is a leading producer -- as well as from the balance of power.


Hwang: Continuing our discussion on the US’ Indo-Pacific Strategy, democratic values are the most utilized approach in terms of implementation. Do you see it as effective?

Mimaki: I guess the ideology diplomacy that the Biden’s administration is pushing has some problems. The Biden administration seems to perceive the world as a competition between “democracy” and “authoritarianism.” Such a perception tends to encourage division, not enhancing solidarity between democratic countries. The Summit for Democracy back in 2021 led by the US was a perfect example that explains such a tension. This summit was held online for two days from Dec. 9, and invited 100 countries and regional leaders. The population of participating countries and regions were a bit less than 60 percent of the entire world’s total population, and represented about 70 percent of the world’s GDP. On the other hand, details at the end were not sufficient, which was shown in the depression of the US’ Asian policy.


Hwang: How would the war in Ukraine influence the Indo-Pacific Strategy?

Mimaki: On Feb. 24, the UN General Assembly held an Emergency Special Session for the first time in 40 years due to Russia’s invasion of Ukraine in which 141 countries out of 193 voted in favor of the resolution. The countries in favor criticized Russia and demanded an immediate cessation of the invasion, and the resolution requiring Russia’s immediate withdrawal was adopted. The UN Secretary General Antonio Guterres said, “The message of the General Assembly is loud and clear.” However, I personally still have some doubts as to whether this is a sincere general assembly of international society. Going deeper, five countries opposed this resolution, and 35 countries abstained. The countries that voted against the resolution were Russia, Belarus, Syria, North Korea and Eritrea. Great powers in Asia including India and China abstained, along with Bangladesh, Laos, Pakistan and Vietnam. There were also some other countries from Africa and Latin America that abstained.


Hwang: Although India is a core country in the Indo-Pacific, it is being quite passive with sanctions on Russia.

Mimaki: On March 19, Japanese Prime Minister Fumio Kishida held a talk with Indian Prime Minister Modi regarding Russia’s invasion of Ukraine. However, in the end their Joint Statement Partnership was no more than calling for an immediate cessation of violence and expressing concerns on the war in Ukraine and the ensuing humanitarian crisis. We could see this as India avoiding an explicit criticism of Russia. The Indian government has declared its position of continuously importing Russian oil under the excuse of skyrocketing crude oil prices. The amount Russia takes up of India’s oil imports is only about 2 to 3 percent, though Russia is suggesting trade by providing massively cheap prices to India. Furthermore, as China is also making a similar move to India, we may have to keep our eyes on how China moves, considering the long-term influence of sanctions on Russia.


Hwang: How is ASEAN doing as the major stage for competition in the Indo-Pacific Strategy?


Hwang: What effort would be necessary for a successful Indo-Pacific Strategy?

Mimaki: As a consequence of the war in Ukraine, more and more countries will split. Countries will flock to various central pillars -- the US, Russia and China. Based on these circumstances and trends, I personally think that the US must pursue cooperation with countries in Asia and other regions -- even though some of them clearly do not belong to the democratic countries. As the Biden administration’s diplomacy has shown over the past year, a rigid diplomatic policy that excessively stressed democratic values resulted in countries that were not strictly classified as “democratic” in Asia and Latin America choosing to stand near Russia and China. From now on, the US must develop and take a more flexible diplomatic attitude. Korea and Japan should also recognize the importance of sharing values and sustain further cooperation.


Hwang: Within the frame of the Indo-Pacific Strategy, what would be the specific areas where Korea and Japan can cooperate?

Kotani: Japan is expecting the invigoration of the US-ROK-Japan trilateral cooperation framework and a joint preparation against North Korea’s nuclear and missile enhancement. It is also expecting cooperation on the Indo-Pacific Strategy and FOIP; support for Taiwan and the regional economy; and cooperation in terms of Quad Plus from Korea’s new government. I look forward to seeing the two countries’ efforts toward making outcomes in the areas above.


Hwang Jae-ho is a professor of the division of international studies at Hankuk University of Foreign Studies. He is also the director of the Institute for Global Strategy and Cooperation and now a member of the Presidential Committee on Policy and Planning. This discussion was assisted by researchers Ko Sung-hwah and Shin Eui-chan.