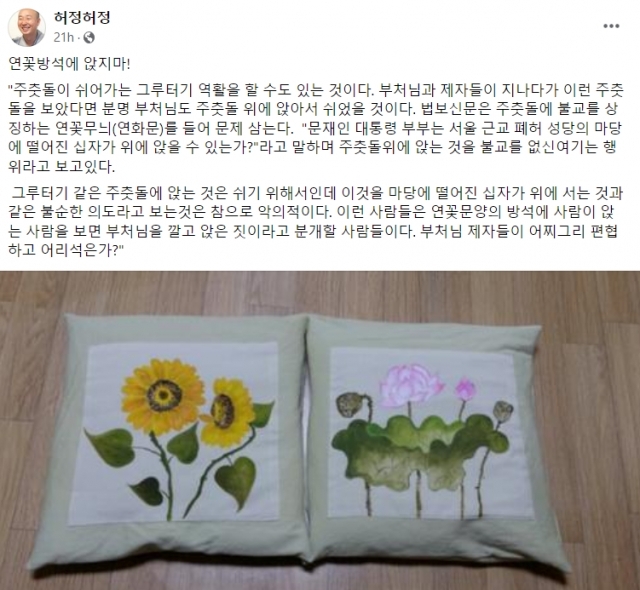 Ven. Heojeong’s Facebook post on Saturday
A number of Buddhist monks have come to the defense of President Moon Jae-in after the president and first lady Kim Jung-sook came under fire for sitting on the cornerstones of a Buddhist temple during a hiking event last week.

“I speak (of the incident) as a Jogye Order monk,” Ven. Yeongdam, director of the Youngdam Hanji Museum in Cheongdo, North Gyeongsang Province wrote on Facebook, Friday. “If you happen to come across a cornerstone at a vacant temple, you can sit down and rest for a while.” 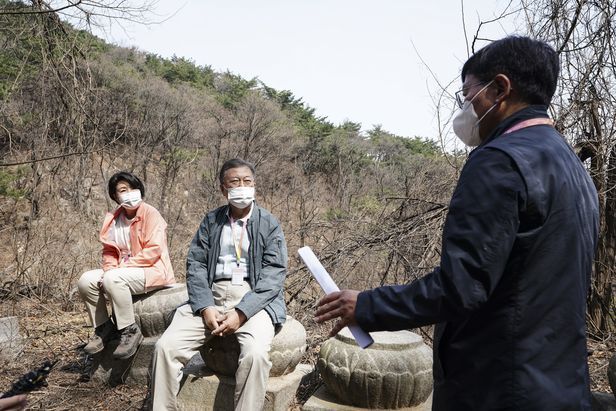 President Moon Jae-in (center) and first lady Kim Jung-sook (left) listen to Kim Hyun-mo, head of the Cultural Heritage Administration, while sitting on the cornerstones of the presumed site of Beopheungsa, on the southern trail of Bukaksan on Tuesday. (Cheong Wa Dae)
Ven. Yeongdam also said that he would like to ask for the public’s forgiveness for the “childish response from the Jogye Order,” which turned the event into a dispute.

Ven. Heojeong, who has been critical of the Jogye Order of Korean Buddhism in the past, shared Ven. Yeongdam‘s post on his Facebook, Saturday. Ven. Heojeong pointed to recent criticisms that compared the incident to stepping on a fallen cross in the yard, saying that it is a malicious interpretation of the incident. The monk added that if Buddha and his disciples saw such cornerstones while passing by, they would also have sat on them and rested.

The Cultural Heritage Administration on Wednesday released a press statement noting that the cornerstones on which Moon and Kim sat are neither Designated Heritages nor Registered Cultural Heritages. On the following day, the presidential office posted a comment through social media, highlighting Moon’s respect for Buddhism and Buddhist communities.