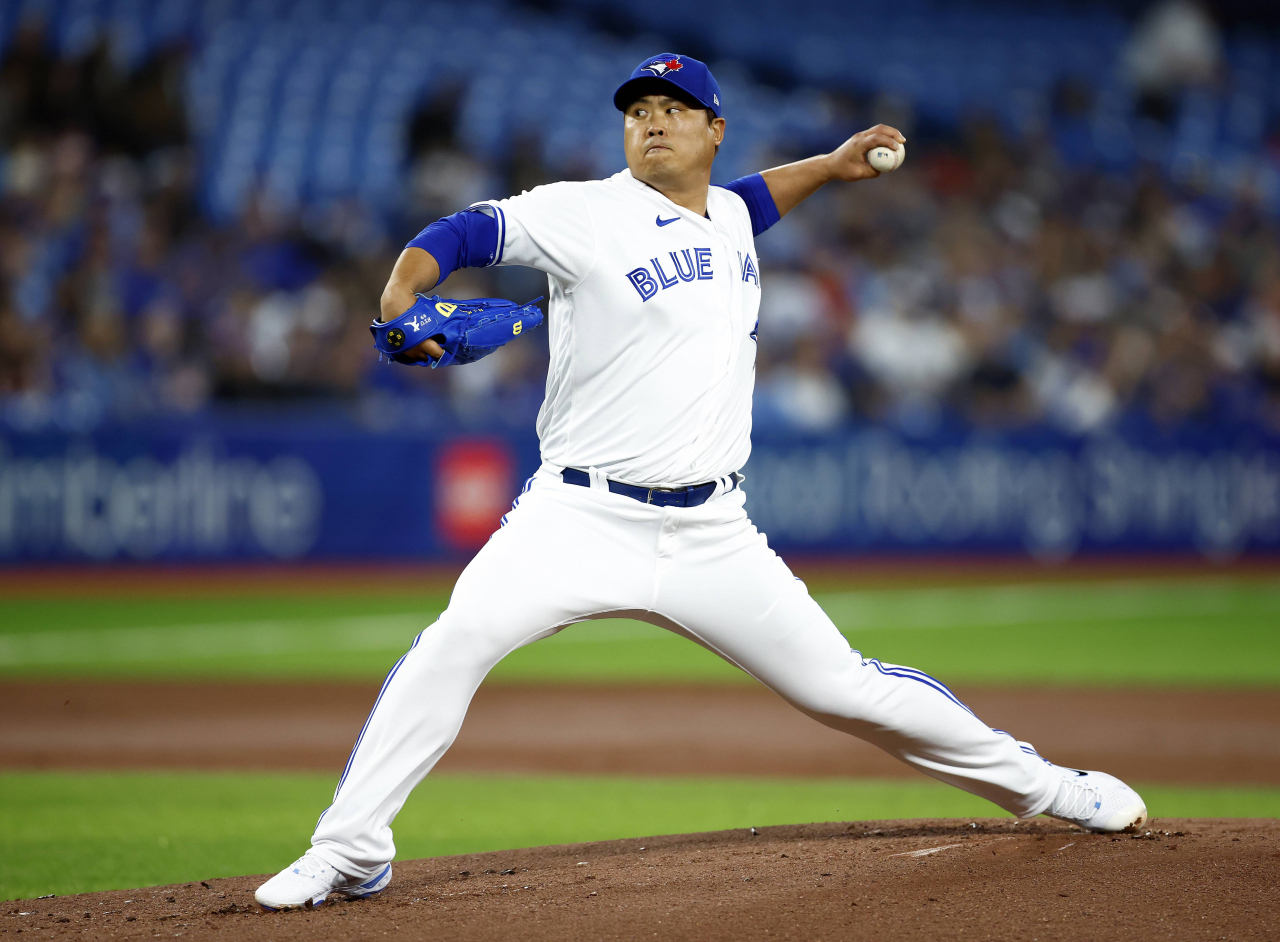 In this Getty Images photo, Ryu Hyun-jin of the Toronto Blue Jays pitches against the Texas Rangers in the top of the first inning of a Major League Baseball regular season game at Rogers Centre in Toronto on Sunday. (Yonhap)

From giving up a half-dozen runs to getting hit by a batted ball, Toronto Blue Jays' starter Ryu Hyun-jin couldn't have scripted a worse outing for his 2022 season debut.

The South Korean left-hander was roughed up for six earned runs on five hits, including a home run, in just 3 1/3 innings against the Texas Rangers, as the Blue Jays fell 12-6 at Rogers Centre in Toronto on Sunday (local time). Ryu didn't factor into a decision, while the Blue Jays lost for the first time this year after back-to-back comeback victories at home.

Those six earned runs were the most Ryu has allowed in a season debut since his major league career began with the Los Angeles Dodgers in 2013.

Ryu left the mound with one out in the top of the fourth inning and the Rangers having cut Toronto's lead to 6-4. Reliever Julian Merryweather allowed both inherited runners to score to make it a 6-6 game. The Rangers added another in that inning, before picking up two runs in the fifth and three more in the seventh to complete the rout.

After Ryu made quick work of the Rangers in the top of the first with a couple of groundouts and a pop out, the Blue Jays staked him to a 4-0 lead in the bottom of the inning. George Springer led off with a solo home run and then Matt Chapman blasted a three-run jack for his first homer as a Blue Jay.

Ryu gave a run right back in the second, though. He struck out the first two batters of that inning but served up a solo shot to Nick Solak, who jumped on a middle-middle fastball and drove it into the right-field seats.

The Blue Jays responded with two solo home runs, first by Danny Jansen in the second and then by Vladimir Guerrero Jr. in the third.

However, the bottom fell out for Ryu in the top of the fourth.

He started the inning by walking Mitch Garver after an eight-pitch battle. Chapman, a two-time Gold Glove winner at third, made a fine play on a hard grounder by Adolis Garcia to get the force out at second, but it was followed by four straight hits -- all of them with an exit velocity of over 100 mph.

Andy Ibanez split the right-center gap for an RBI double to make it a 6-2 game. Solak kept the line moving with a scorcher of a single past shortstop Bo Bichette. With runners at the corners, Charlie Culberson's single to left cut the Blue Jays' lead to 6-3.

Jonah Heim then ended Ryu's day with a single that deflected off the pitcher's leg and rolled into the right side of the infield, as another run scored.

Ryu walked off the field under his own power, having thrown 70 pitches, 43 of them for strikes. He then watched the Rangers get to Merryweather for three more runs -- two of them charged to Ryu.

Ryu barely got anything by Texas hitters. According to Statcast data, the Rangers took 33 swings on Ryu's 70 pitches and missed just five times. Ryu's bread-and-butter changeup only induced two whiffs out of 10 offerings. He threw five cutters and four of them were put in play, while another went for a foul.

After being Toronto's Opening Day starter in 2020 and 2021, Ryu has been slotted as the team's No. 3 starter this year, behind Jose Berrios and Kevin Gausman.