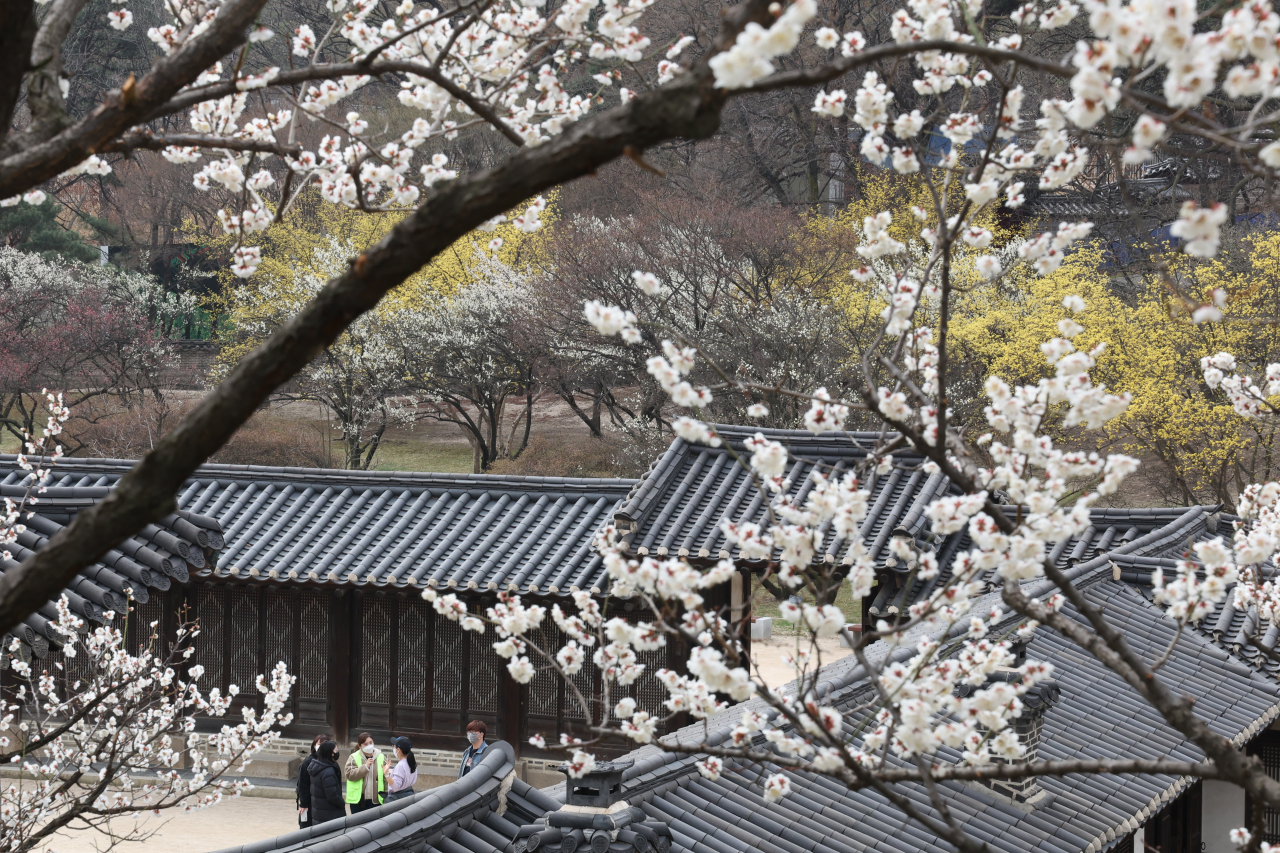 Visitors take in Nakseonjae at Changdeokgung in Seoul on March 30. (Yonhap)
As flowers herald the arrival of spring, palaces and royal tombs are hosting special events that highlight the beauty of the space and their history.

At Changdeokgung, a Joseon palace that is inscribed in the UNESCO World Heritage list, Nakseonjae is open to public viewing through Wednesday.

A special tour will be held daily at 10:20 a.m., taking visitors through the royal quarters that was built by King Heonjong in 1847.

Its last inhabitant was Lee Bang-ja, also known as Masako, the Japanese-born wife of King Yeongchin, who died in 1989. King Yeongchin and his wife had taken up residence at Nakseonjae upon their return to Korea from Japan in 1963.

After a short guided tour on the history of royal families of the Korean Empire, visitors can go up the hill of Secret Garden and view Nakseonjae surrounded by flower blossoms, including the famous apricot flower tree in the courtyard.

At Gyeongbokgung, a “Saenggwabang (Fresh fruit room)” program will be held from April 20 to June 25, where visitors can taste various fruits and herbal teas favored by the Joseon kings.

Meanwhile, Changgyeonggung will present historical stories tied to palace trees led by expert guides each weekend, from the month of April to November.

As for royal tombs, Donggureung, a cluster of Joseon era royal tombs located in Guri, Gyeonggi Province, will hold the annual Cheongwan Yechoeui event on Wednesday. The public event hosted by the Cultural Heritage Administration since 2010 involves cutting of silver grass that grow atop Geonwonneung, the tomb of King Taejo, the founder of Joseon Kingdom. Silver grass, rather than grass, was planted on the mound in accordance to King Taejo’s will.

Jeongneung, located in Seongbuk-gu, northern Seoul, is noted for its mountain cherry blossoms, forsythias and azaleas that bloom along the nearby stream. A 700-meter stretch of azalea-lined path is also a notable flower-viewing course near the royal tomb of King Sejong, located in Yeoju, Gyeonggi Province.

Some of the flowers and trees at palaces and royal tombs to look for in spring include Changdeokggung’s weeping cherry blossoms and Changgyeonggun’s ginger plants, according to the CHA.

Detailed information and reservation procedures on cultural events and blossom viewings around palaces and royal tombs can be found at the CHA’s Royal Palaces and Tombs Center website.