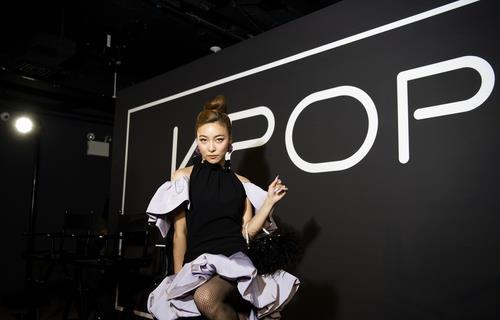 Luna poses at a press event for musical “Kpop” on Wednesday in New York. (Yonhap)

“Kpop,” an original musical about what it takes to be a K-pop star, is hitting Broadway in October after five years as a smaller scale show that has grown in popularity in tandem with the global rise of Korean music.

“Kpop” premiered as an immersive off-Broadway show in the fall of 2017. The production received the 2018 Richard Rodgers Award, three Lucille Lortel Awards, including best musical, the Off Broadway Alliance Award, and seven Drama Desk Award nominations. It was conceived by theater company Woodshed Collective and playwright Jason Kim with music and lyrics by Helen Park and Max Vernon.

“‘Kpop’ tells an original story of global superstars, putting everything on the line for a special one-night-only concert event, during which one music idol’s inner struggle threatens to dismantle an entertainment powerhouse,” “Kpop” composer Park said during a press conference at Korean Cultural Center New York on Wednesday. “The world we explore in ‘Kpop’ is cutthroat, relentless in its pursuit of perfection, full of passionate, hugely ambitious artists, and ultimately a source of joy for the audience to develop the world.”

In a joint statement, the show’s two producers Tim Forbes and Joey Parnes said “the driving force of this production of ‘Kpop’ has always been to fuse the vibrant, joyful, and wildly entertaining world of K-pop with the powerful storytelling of a Broadway musical.”

The show features K-pop star Luna, the main vocalist of the now-disbanded K-pop girl group f(x), who is making her Broadway debut as MwE, one of the three K-pop stars in the musical. In Korea, she has appeared in several original and Korean versions of foreign musicals, including “Legally Blonde” and “In the Heights.”

“Broadway represents the pinnacle of my achievement in this profession. So being able to bring my culture to the fans who flock here to see a Broadway show is the honor of my life,” Luna said.

The full cast for “Kpop” has yet to be announced.

Preview shows will begin on Oct. 13 at Circle on the Square Theatre in New York and run for 10 days. The opening is planned for Nov. 20.